The Different Paths of Greece and Spain to High Unemployment

Euro area GDP remains below its 2007 level due to the global financial meltdown
and the subsequent sovereign debt crisis in the periphery countries. Unemployment
rates make it clear that some countries have fared much worse than others—the
rates in Spain and Greece today are over 25 percent and are much higher
than rates in the next highest, Portugal (15.7 percent), and in the euro
area (11.6 percent). Quite a change from 2007, when Spain and Greece had
lower unemployment rates than the euro area as a whole. In this post, we show
that while the unemployment rates in the two countries are similar today, the
paths have been very different. The employment decline in Greece, like in the
euro area, has been proportional to the country’s steep decline in GDP; Spain’s
employment has fallen much more than output, due in part to its notable labor
market flexibility.

A look
at total employment for Greece and Spain in the chart below shows the large
percentage declines in the two countries since 2007. Job losses started earlier
in Spain, with the collapse of a housing bubble, while Greece managed to keep
employment levels stable, in line with the euro area as a whole, before its
sovereign debt crisis caused very steep declines in employment beginning in
2010. In both countries, employment in 2012 is down roughly 15 percent
from 2007 levels. 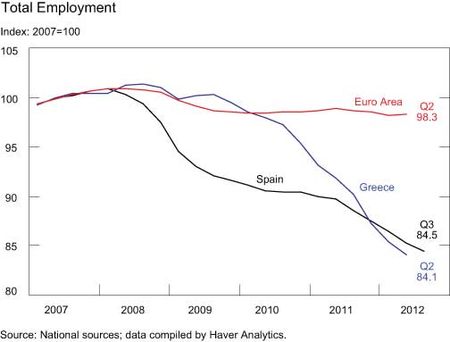 The demographic aspects of the drop in employment are
also similar in the two countries. In the charts below, the solid lines
represent employment-to-population ratios across age groups in 2007. The dashed
lines are for 2009, covering the initial euro area downturn, and the dotted
lines are for 2011, highlighting the impact of the sovereign debt crisis. Black
lines represent males and blue lines females. 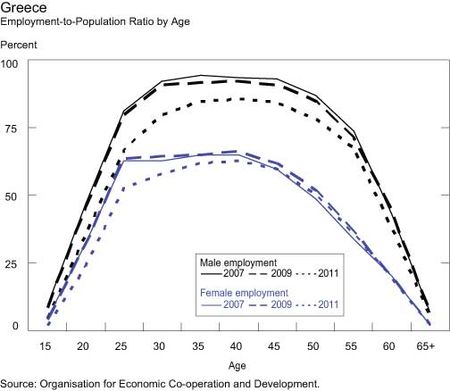 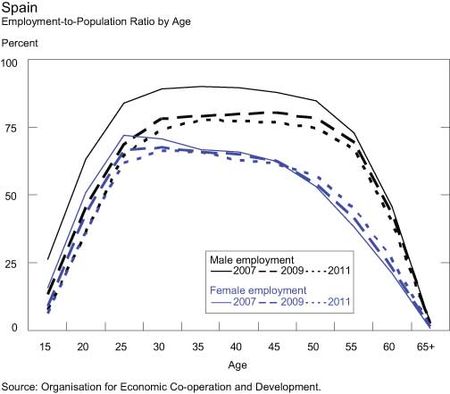 The charts illustrate that male workers and the young
suffered the biggest employment losses in Greece and Spain. Older workers fared
the best, with older males largely holding their ground while older females
achieved gains. A factor behind the better performance of older workers in the
two countries may be delayed retirement decisions in the face of economic
uncertainty.

The appearance that the job losses were similar in
nature, though, vanishes when compared with the size of output declines in the
two countries. In 2012:Q3, euro area output was down 1 percent from its
2007 level. Spain has done poorly relative to the region, with output down
4 percent, but this decline is small compared with that of Greece, which
has suffered a 19 percent drop. The percentage declines in output and
employment are roughly equal in Greece and the euro area as a whole, but job
losses in Spain have been much larger than the decline in output. 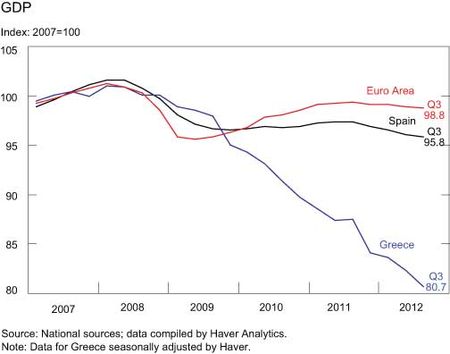 The high unemployment rate in Greece is not surprising
given the depths of its recession, but what explains Spain’s 25.8 percent
unemployment rate given its much more modest downturn? One contributing factor
is the fact that the composition of Spanish jobs made the economy vulnerable to
dramatic job losses during a recession. In 2007, almost 13 percent of jobs
in Spain were in construction, compared with roughly 8 percent in Greece
and the euro area. Such a heavy weight on this sector made employment more
vulnerable to a downturn given the fact that construction is the sector that
typically experiences the steepest decline in a recession. Indeed,
construction, as measured in the GDP accounts, fell 35 percent from 2007 to
2011, and the sector accounted for almost 60 percent of the decline in
total employment over this period.

This unusually high reliance of the economy on
temporary contracts may well have supported job growth in Spain before the
recession. Firms should be more willing to hire workers with temporary
contracts during an upturn if they know that hires can be let go at a
relatively low cost. In a downturn, this arrangement makes it easier for firms to shed
jobs. 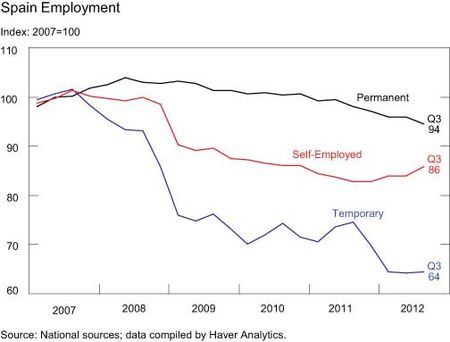 Spain’s employment experience relative to the rest of
the euro area illustrates the cost to the economy of firms having such a high
level of flexibility in how they manage workers. Going forward, the
hope is that the benefits of such a flexible labor market will also become
apparent as firms are quick to hire once the economy starts to make a
meaningful recovery.

Thomas
Klitgaard is a vice president in the Research and
Statistics Group of the Federal Reserve Bank of New York.

Ayşegül Şahin is
an assistant vice president in the Research and Statistics Group.