Why (or Why Not) Keep Paying Interest on Excess Reserves?

In
the fall of 2008, the Fed added new policy tools to its portfolio of techniques
for implementing monetary policy. In particular, since October 9, 2008,
depository institutions in the United States have been paid interest on the
balances they hold overnight at Federal Reserve Banks (see Federal Reserve Board announcement). Several other central
banks, such as the European Central Bank (ECB) and the central banks of Canada,
England, and Australia, have somewhat similar deposit facilities allowing banks
to earn overnight rates on their balances. In this post, I discuss the benefits
and costs of this new tool in an environment where excess reserves in the
United States have now exceeded $1.4 trillion and account for close to 95
percent of all reserves.

It has typically been argued that the interest rate
paid by central banks on required reserve balances effectively compensates
depository institutions for the implicit tax that reserve requirements impose
on them, while the interest rate paid on excess balances provides the central
bank with an additional tool for conducting monetary policy. Central banks
differ, however, in the strategies they use to implement the rates paid on
excess reserves. For example, the ECB does not pay interest on excess reserves
directly but instead offers a deposit facility where banks can place excess
reserves overnight. The Fed, by contrast, pays interest on depository
institutions’ excess balances directly.

Since the implementation of this new policy in the
United States, reserves have increased to unprecedented levels (see chart
below). And although there is no doubt that adding a new tool has strengthened
the Fed’s ability to conduct monetary policy, some economists have recently
begun to discuss the current costs and benefits of remunerating excess
reserves: Should the trade-off between benefits and costs be reconsidered at
this time? Or put differently, how would it matter if the Fed lowered the
interest rate on excess reserves? 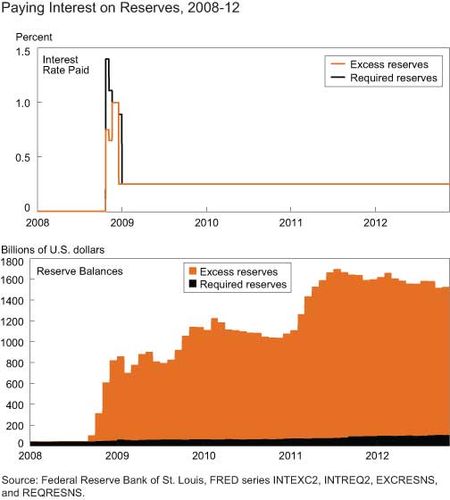 My recent paper with Ricardo Lagos of New York University can help
answer such questions. This work provides a search-based model of the U.S.
interbank market that captures some of the market’s key institutional features,
including its decentralized (over-the-counter) nature. This feature is
important because it means that banks must first find a potential counterparty
with which to negotiate the terms (size and rate) of a loan before borrowing and
lending can actually take place.

In a stylized version of the model, the rate negotiated
between a borrower and lender can be understood as a weighted average of their
outside options—that is, a weighted average of the return that a lender would
earn if it did not make the loan and instead kept the reserves in its account
at the Fed overnight (interest on excess reserves) and the rate that the
borrower would have to pay if it could not get a loan and needed to borrow from
the discount window (discount window rate and other penalties such as stigma).
The weights capture the bargaining power of borrower and lender and, more
important, the aggregate level of reserves. When excess reserves are very high
relative to the level of required balances, as is the case in the United States
at present, the weight on the interest paid on excess reserves is very close to
one, and changes in interest on excess reserves translate almost one-to-one
into changes in the federal funds rate. In current market conditions, this
would mean that reducing the rate the Fed pays on excess reserves would push
the fed funds rate to near zero.

The textbook benefit of lowering interest rates is the stimulative
effect on economic activity. The tactic is generally used by central banks to
reduce the real cost of borrowing and encourage consumption and investment when
the economy starts to weaken. However, it has been suggested that the
effectiveness of lowering rates may be limited when rates are already very
close to zero. Another benefit of reducing rates would be to lower money market
rates and stimulate bank lending, although the effect may also be marginal in
the current environment. An additional argument in favor of lowering rates can
be found in traditional and recent theories of money that typically argue that
a zero nominal interest rate leads to an optimal allocation of resources in the
economy.

What about the costs of lowering rates? Reducing rates
in an ultra-low-interest-rate environment may lead to a deflationary spiral.
However, many economists have suggested that the risks of a deflationary trap
are probably small.

Additional costs were also pointed out at the Federal
Open Market Committee (FOMC) meeting held on September 20-21, 2011 (see Minutes). When discussing the possibility of lowering the
interest paid on reserves, participants at the meeting raised concerns that a
close-to-zero rate could lead to disruptions in several financial markets. In
particular, lowering rates could further depress the volume traded in the
federal funds market. In a thinner market, the rate could then be driven by
infrequent transactions that are no longer representative of overnight
borrowing costs. The information that this rate may convey would then be lost.
Very low interest rates could also place money markets funds under stress—an
outcome that could disrupt access to short-term credit for some borrowers,
including large firms. As pointed out by Todd Keister in a post on November 16, 2011, on the zero lower bound,
financial distress could also reach the U.S. Treasury market if rates were to
become negative.

Overall, reducing the rate paid on excess reserves
would push the fed funds rate closer to zero, which could have detrimental
effects on several financial markets. Uncertainty about the scope of these
disruptions to financial markets seems to be preventing central banks from
lowering rates further.

Gara Afonso is an economist in the New York Fed’s Research and Statistics Group.