« Historical Echoes: The Founding and Foundation of the New York Fed | Main | A New Approach for Identifying Demand and Supply Shocks in the Oil Market »

Last October, Superstorm Sandy caused widespread destruction and massive disruptions to the regional economy, not to mention the lives of millions of residents. More than three months later, many people remain displaced, and some are still struggling to rebuild their homes, businesses, and lives. Despite these setbacks, the process of economic recovery in the region appears to be well underway, boosted by the beginning of the cleanup and restoration process. In this post, we take an initial look at the adverse impact Sandy has had on the region’s jobs, describing the nature and extent of the employment downturn and the subsequent rebound following the storm.

While estimates of the magnitude and duration of the economic disruptions to the area vary, the storm clearly had a substantial adverse effect on the local labor market immediately after it hit shore. As the chart below shows, new claims for unemployment insurance, a measure that is tabulated and reported weekly, had been running at around 35,000 in the states of New York and New Jersey combined prior to Sandy. In the first full week of November, they jumped above 100,000 and remained elevated for another two to three weeks. In all, we estimate that roughly 160,000 initial unemployment claims filed in the two states during the month of November were related to Sandy, causing an unprecedented shock to the regional job market. 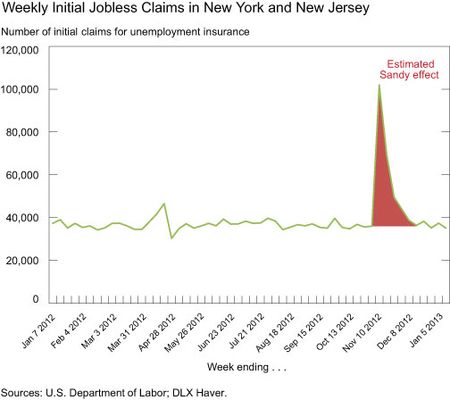 The majority of the jobs lost were in the New York City metropolitan area, a geography that includes much of the storm-affected area in Long Island and northern New Jersey. The next chart depicts the payroll employment numbers collected from a survey of firms during the second full week in November. The figures show a loss of 32,000 jobs in the New York City metropolitan area—a significant number, though a good deal lower than suggested by the surge in jobless claims. The discrepancy suggests that many of the people filing for unemployment insurance at the beginning of the month may have been back at their jobs, or in other jobs, by the time the payroll employment survey was conducted. Also, while many people suddenly found themselves out of work in the aftermath of Sandy, it is likely that others found work created as a consequence of the storm, a development that provided some offset to jobs lost in November. 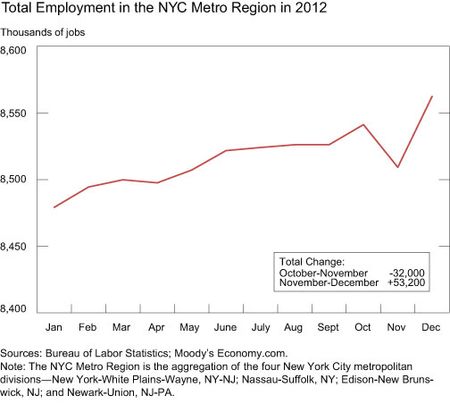 By the beginning of December, new jobless claims had retreated to their pre-Sandy levels, and payroll employment figures for the month showed a strong rebound in New York and New Jersey. In fact, New Jersey’s private sector recorded its biggest monthly job gain since 1986, while New York State’s also saw a fairly vigorous bounce back. With these increases, both states saw employment rebound to above October (pre-Sandy) levels by the end of the year. In the New York City metropolitan area, November’s 32,000 job loss was followed by a striking gain of more than 53,000 jobs in December.

This pattern of steep job loss and rapid recovery is typical following natural disasters. The chart below looks at the change in employment before and after the storm by sector for the New York City metropolitan area. We look at the seasonally adjusted change in job counts between October and November (capturing job losses just after the storm hit) and between November and December (capturing the first full month of recovery). As might be expected, employment in the leisure and hospitality sector declined by a sharp 14,000 following Sandy. Employment in the education and health services sector and the construction and government sectors also took sizeable hits. It is important to keep in mind that these numbers don’t reflect reductions in hours worked and wages earned by the workers that remained employed, so they understate the impact of the storm on workers’ incomes. For example, some waiters and other service workers who rely heavily on tips may have seen their earnings cut sharply as the storm disrupted the normal flow of patrons. Part of the December turnaround reflects the initial stages of rebuilding after the storm. Both the construction and finance and real-estate sectors saw strong job gains in December. These gains may even be understated since the construction and (to an even greater extent) the real-estate industries employ private contractors who are not included in the monthly employment numbers. (These data count workers on companies’ payrolls but not the self-employed). The leisure and hospitality and education and health sectors also recovered sharply in December. Similarly, the retail and state and local government sectors experienced job gains as the storm’s disruptions dissipated and peoples’ usual activities resumed.

New payroll employment data for the region will be available later this month, which will include January jobs numbers and revised jobs estimates for all of 2012. An analysis of these figures will provide a clearer picture of the region’s employment losses and gains following Sandy. At this point, the initial data suggest that the employment recovery in the region has gotten off to a good start.

Jaison R. Abel is a senior economist in the Federal Reserve Bank of New York's Research and Statistics Group.

James A. Orr is a vice president in the Research and Statistics Group.
Posted by Blog Author at 07:00:00 AM in Regional Analysis