« Does Import Competition Improve the Quality of Domestic Goods? | Main | Historical Echoes: The Invention of the ATM–A Case of Multiple Independent Discovery? »

Foreclosures Loom Large in the Region

Households in the New York-northern New Jersey region were spared the worst of the housing bust and have generally experienced less financial stress than average over the past several years. However, as the housing market has begun to recover both regionally and nationally, the region is faring far worse than the nation in one important respect—a growing backlog of foreclosures is resulting in a foreclosure rate that is now well above the national average. In this blog post, we describe this outsized increase in the region’s foreclosure rate and explain why it has occurred. We then discuss why the large build-up in foreclosures could cause a headwind for home-price gains in the region. 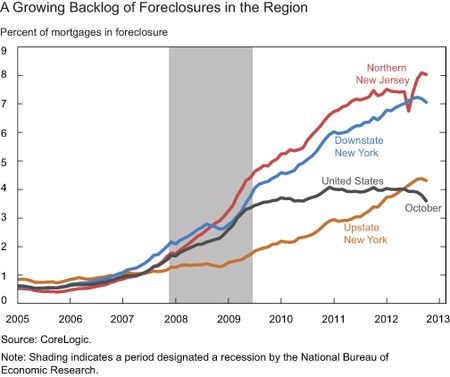 The relatively large stock of foreclosures in our region may come as a surprise given that the housing bust was far less severe here, and household finances have been generally under less stress than nationally in recent years. As the chart below shows, the share of mortgages entering foreclosure each month in the region during the 2010 to 2012 period was at or below the national average, with the rate especially low in upstate New York. Yet while fewer mortgages are entering foreclosure on a monthly basis than nationally, more of them have been getting stuck there. Indeed, the chart shows that it takes far longer for homes to complete the foreclosure process in New York and New Jersey compared with the national average. 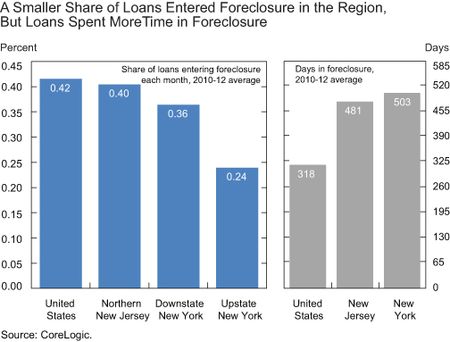 There are a couple of reasons why the large and growing backlog of foreclosures might exert a drag on the region’s home prices going forward. When a home enters foreclosure, the incentive for homeowners to maintain or improve the home is significantly reduced. This is because homeowners won’t be selling the home and so will not be able to recoup their costs once ownership is transferred to the foreclosing bank. As a result, homes in foreclosure tend to deteriorate more rapidly than otherwise similar homes, diminishing their values. Also, once the foreclosure process has been completed, these bank-owned properties are typically put up for sale, and are often sold as distressed properties at reduced prices, in part because the foreclosing bank would prefer not to hold them for long. These sales can reduce their neighbors’ home values as well. Indeed, recent research suggests that reduced investment by homeowners in foreclosure creates a negative externality resulting in downward price pressure on nearby properties. Time is also a factor; the longer a home is in foreclosure in judicial states like New York and New Jersey, the greater the potential for homes to deteriorate and prices to decline. Since there are now a fairly large number of homes in foreclosure in the New York-northern New Jersey region, we may see a dampening effect on regional home prices as these distressed properties work their way through to the market. In fact, to the extent that price declines are anticipated, some of this decline may already be priced into the market.

While the future path of home prices is hard to predict, recent trends indicate that home prices in the New York-northern New Jersey region may have reached a bottom. Given the strong connection between housing and local economic performance, this firming is good news. Still, the growing backlog of foreclosures in our region may be exerting a drag on home prices and may well continue to do so in the future as more distressed homes come onto the market. And the longer these homes stay in foreclosure, the worse the effect on prices as they deteriorate and create negative externalities for their neighbors.

Jaison R. Abel is a senior economist in the Federal Reserve Bank of New York's Research and Statistics Group.

Richard Deitz is an assistant vice president in the Research and Statistics Group.
Posted by Blog Author at 07:00:00 AM in Financial Markets, Foreclosure, Household Finance, New York, Regional Analysis

The latest figures from the NYS Division of Banking indicate that roughly 30% of all owner-occupied properties in NYC are now seriously delinquent. For Long Island, it’s 35%.