How Liquid Is the Inflation Swap Market? -Liberty Street Economics

How Liquid Is the Inflation Swap Market?

Inflation swaps are used to transfer inflation risk and make inferences about the future course of inflation. Despite the importance of this market to inflation hedgers, inflation speculators, and policymakers, there is little evidence on its liquidity. Based on an analysis of new and detailed data in this post we show that the market appears reasonably liquid and transparent despite low trading activity, likely reflecting the high liquidity of related markets for inflation risk. In a previous post, we examined similar issues for the broader interest rate derivatives market.


Inflation Swaps Defined
An inflation swap is a derivatives transaction in which one party agrees to swap fixed payments for floating payments tied to an inflation rate for a given notional amount and period of time. For example, an investor might agree to pay a fixed per annum rate of 2.5 percent on a $25 million notional amount for ten years in order to receive the rate of inflation for that same time period and amount. The inflation gauge for U.S. dollar inflation swaps is the nonseasonally adjusted consumer price index for urban consumers.

The figure below illustrates the cash flows for a zero-coupon inflation swap—the most common inflation swap in the U.S. market. As the name “zero-coupon” swap implies, cash flows are exchanged at maturity of the contract only. The fixed rate (the swap rate) is negotiated in the market so that the initial value of a trade is zero. As a result, no cash flows are exchanged at the inception of a swap.

Market Is Modest in Size, but Growing Quickly
Evidence suggests that the U.S. inflation swap market is modest in size, but growing quickly. As shown in the chart below, data from BGC Partners, a leading broker, indicates that interdealer trading of zero-coupon swaps averaged roughly $100 million per day in 2010, $160 million per day in 2011, and $190 million per day in the first half of 2012.  Data from an informal survey of dealers—accounting for activity with customers as well as activity brokered among dealers—peg the overall market size in April 2012 at roughly $350 million per day. 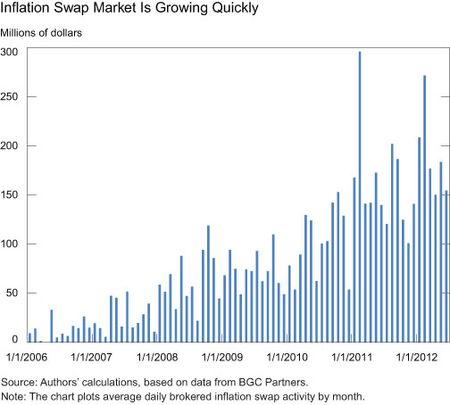 Transaction Data Point to Low Trade Frequency
The bulk of our analysis is based on inflation swap transactions between June 1 and August 31, 2010, in which a major derivatives dealer was on at least one side of the resulting position. The data come from MarkitSERV, the predominant trade-matching and processing platform for interest rate derivatives. The data set contains just 144 U.S. inflation swap trades, or an average of just 2.2 per day. The data set doesn’t cover every transaction in this over-the-counter market, but is reasonably thorough, covering an estimated 44 percent of interdealer activity.


Trading Concentrates in Certain Tenors
We identify concentrations of inflation swap activity in certain tenors, as shown in the chart below. The ten-year tenor alone accounts for 45 percent of activity, followed by tenors of five years (14 percent), three years (11 percent), one year (8 percent), and fifteen years (7 percent). 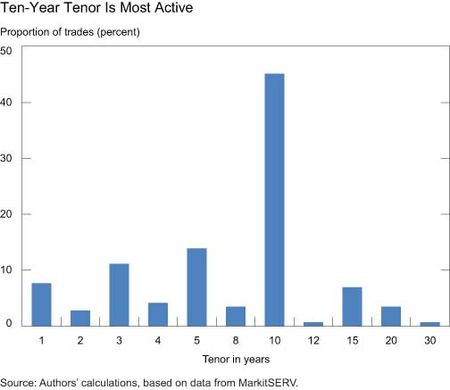 Trade Sizes Are Large and Fairly Standardized
Despite the low trade frequency in the inflation swap market, we identify a mean trade size of $29.5 million and a median of $25 million. Trades are concentrated in certain sizes, so that 36 percent of all trades are $25 million, 8 percent are $50 million, and 3 percent each are $15 million and $100 million. Tenor is one factor explaining trade size variation, with one-year trades in particular being larger than longer-tenor trades.


Bid-Ask Spreads Are Modest
The spreads between bid and offer prices are modest in this market, indicating a low cost of trading despite the low trade frequency. Bid-ask spreads faced by institutional customers, as estimated from transaction data, average just under 3 basis points.  Results from a survey of dealers are consistent with this estimate, pointing to average bid-ask spreads of 2 to 3 basis points in both the interdealer and customer-dealer markets.


Prices Seem to Be Transparent
Lastly, the inflation swap market appears reasonably transparent despite the low frequency of trades. The chart below shows that transactions in the ten-year tenor occur at prices close to end-of-day mid-quotes from Barclays and Bloomberg. Moreover, trades involving customers occur at prices that deviate from mid-quotes only slightly more than trades between dealers. This evidence suggests that there’s a general consensus among transacting customers as well as dealers as to what prices should be for a given contract. 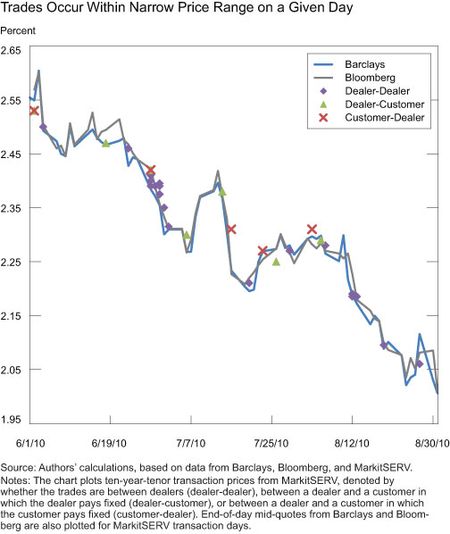 Why Is the Market So Liquid Despite the Low Trading Frequency?
How can we reconcile the low frequency of trades in this market with the large trade sizes, modest bid-ask spreads, and seemingly high transparency? The inflation swap market is part of a much larger market for transferring inflation risk. This larger market includes other derivatives products as well as more actively traded Treasury Inflation-Protected Securities and nominal Treasury securities. The broader market provides a vehicle for pricing inflation swaps and for hedging positions taken in the market. As a result, the low frequency of inflation swap trades isn’t a good gauge of the market’s liquidity or transparency.

Michael J. Fleming is a vice president in the Research and Statistics Group of the Federal Reserve Bank of New York.

John Sporn is a senior analyst in the Markets Group of the Federal Reserve Bank of New York.
Posted by Blog Author at 07:00:00 AM in Exchange Rates, Financial Markets

Excellent work. Regarding the relative pricing of inflation swaps versus TIPS, see

"Why does the Treasury Issue TIPS? The TIPS-Treasury Bond Puzzle." (Matthias Fleckenstein, Francis Longstaff, and Hanno Lustig), forthcoming in Journal of Finance.

The authors claim that TIPS are cheap relative to inflation swaps. In any case, there is some more research to do here, given that both the TIPS market and the inflation swaps market seem to be relatively efficiently priced, internally.