I Want My Money Now: The Highs and Lows of Payments in Real Time

Peel back the layers of complex financial institutions and instruments, and you’re
left with individuals demanding to be paid, and to be paid quickly. Payments
are the electricity that powers the entire financial system. The ability to
securely send and receive timely payments is a prerequisite for commerce and
the smooth functioning of financial markets. Despite the seemingly
straightforward nature of the subject, a preliminary exploration of payments
data offers insight into how institutions react to changing economic
conditions. In this post, we aim to investigate recent volatility in the amount
of payments, particularly during the recent financial crisis. We focus on
estimating and extracting changing levels of payments required for interbank
lending, which reflect banks’ varying needs for liquidity. We find that
variables capturing macroeconomic conditions and financial market stress are
additional large drivers of fluctuations in payments.

Depository institutions and
government agencies make trillions of dollars in payments every day. The Fedwire®
Funds Service is the Federal Reserve’s payments network over
which billions of dollars can flow within seconds throughout the country. Just
as payments are the electricity of the financial system, the Fedwire Funds Service
is the circuitry. The service allows over 7,000 depository institutions and
other participants to electronically transfer funds to each other on behalf of
themselves and their customers, which include deposit account holders and other
financial institutions. Additionally, the Fedwire Funds Service plays a
versatile payments role for a variety of institutions other than depository
institutions, including foreign exchange settlement groups, the U.S. Treasury, and
other federal and international agencies (for more on the operation of the service,
see this August 2012 post).

Between 2002 and 2008, the value
(dollar volume) of payments grew steadily upward. However, as the chart below
shows, this trend becomes more volatile after the onset of the financial
crisis, the start of which we identify as BNP Paribas’ announcement to freeze
three asset-backed-securities investment funds when the securities couldn’t be
fairly valued.

Much of the dramatic fluctuations in
Fedwire payments become more muted after one removes overnight loans made or
intermediated by banks, which are a primary set of transactions that pass through
the Fedwire Funds Service. Overnight loans are a key source of short-term
funding for banks, particularly when they’re strapped for cash. We estimate
such loans using a statistical algorithm originated by former Fed economist Craig Furfine
that aims to match payments over the Fedwire Funds Service into corresponding
pairs. By way of disclaimer, we note
that, historically, algorithms based
on the work of Furfine have been used as a method of identifying overnight or
term federal funds transactions. The Research Group of the Federal Reserve Bank
of New York has recently concluded that the output of its algorithm based on
the work of Furfine may not be a reliable method of identifying federal funds
transactions. (It should be noted that for its calculation of
the effective federal funds rate, the Federal Reserve Bank of New York relies
on different sources of data, not on the algorithm output.) The output of the
algorithm may include transactions that are not fed funds trades and may
discard transactions that are fed funds trades. Some evidence suggests that
these types of errors in identifying fed funds trades by some banks may be
large.
This post therefore refers to the transactions that are identified using the
Research Group’s algorithm as overnight or term loans made or intermediated by
banks. Use of the term “overnight or term loans made or intermediated by banks”
in this post to describe the output of the Research Group’s algorithm is not
intended to be and should not be understood to be a substitute for or to refer
to federal funds transactions.

As one can glean from the chart
below, even after we remove these overnight loan transactions from the data set,
we still observe a fluctuating series, with a large run-up in payments leading
to the financial crisis and extreme fluctuations in Fedwire payments levels
thereafter. 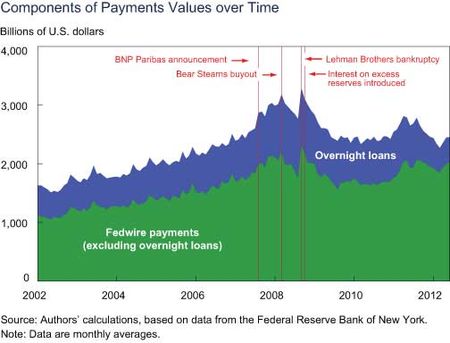 A simple linear regression on
traditional macroeconomic and financial variables illuminates what drives the
fluctuation in payments activity. We include in the regression (see table
below) the three-month spread between the London interbank offered rate (Libor)
and the overnight indexed swap (OIS) rate, a measure of
financial market illiquidity and banking financial distress, as well as New
York Stock Exchange (NYSE) volume as a measure of financial market activity. GDP
is included to account for general movements in the economy at large, and a last-day-of-quarter
dummy captures any end-of-quarter “window dressing” effects. Finally, period dummies
are included to demarcate various phases of the financial crisis. The events we
use to split up our sample are, in order, the BNP Paribas announcement to
freeze three investment funds, the buyout of Bear Stearns, the bankruptcy of
Lehman Brothers, and the introduction by the Federal Reserve of interest payments
on excess reserves (IOER) as
excess reserves broadly increased. 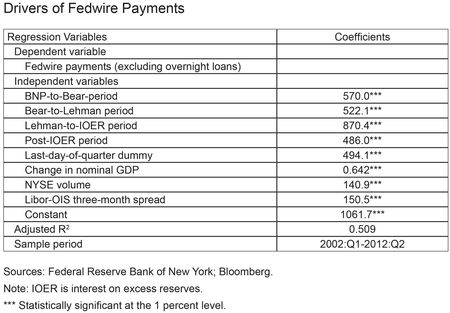 All of these variables are positive
and highly significant. The positive coefficient for GDP likely reflects that
demand for commercial payments increases as the economy grows, holding the
other regression variables constant. As expected, overall financial market
activity, represented by the volume of trades on the NYSE, is highly correlated
with payments transfers.

Interestingly, the positive
coefficient for the Libor-OIS spread implies that increasingly illiquid financial
market conditions are highly correlated with payments values. One possible
explanation for this finding could be that during times of bank funding stress,
banks and other market participants may be more forceful in demanding immediate
payment to reduce counterparty exposures, rather than waiting to receive
offsets later, resulting in larger payments values on average.

Furthermore, the size and sign of
the coefficients for our period dummies are consistent with the striking
up-and-down pattern of the series. The constant represents the average value of
Fedwire payments before the start of the crisis (pre-BNP). Compared with precrisis,
the post-BNP periods have larger average values of aggregate payments. In
particular, the alternating magnitudes of the coefficients for the period dummies
in the post-BNP periods capture the fluctuations of payments volumes, as the
coefficient for the Bear-to-Lehman period is smaller than that for the
BNP-to-Bear period, and the coefficient for the post-IOER period is smaller
than that for the Lehman-to-IOER period. In summary, our R2 value indicates that our model captures 50.9 percent
of the variation in payments.

In the stacked-area chart below, we
plot each variable’s contribution to the overall Fedwire series, so that the
cumulative sum of the stacks yields the original Fedwire values. We multiply
each regression coefficient by the values of its corresponding independent
variable and add overnight loans. We observe that the bottom series, which
includes the regression residual as well as the effect of the period dummies
and the change in GDP, is indeed flatter than the raw Fedwire series,
especially during the financial crisis; this illustrates that a large amount of
variation in Fedwire payments values is accounted for by the other variables in
the regression. Lastly, the monthly average of the last-day-of-quarter effects
can be seen at the top of the chart. 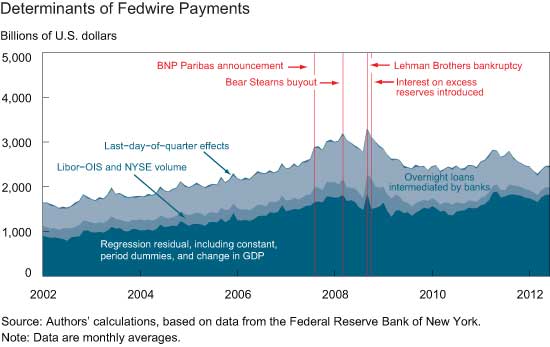 Our results capture how a growing
economy requires increasing levels of payments, and how in times of turmoil
payments levels respond to growing demands for immediacy. Further exploration
into these findings will shed light on how these variables relate.

Parinitha Sastry is a senior research analyst in the New York Fed’s Research and Statistics Group.

David Skeie is a senior economist in the Research and Statistics Group.