« The Effect of Superstorm Sandy on the Macroeconomy | Main | Uncertainty, Liquidity Hoarding, and Financial Crises »

An important measure of success for monetary policy is a central bank’s ability
to anchor inflation expectations; inflation expectations influence actual
inflation and, hence, the achievement of a given inflation goal. This notion has
special significance for Japan, where CPI inflation has been intermittently
negative since 1994 and where it is widely believed that expectations of future inflation have been persistently negative (that
is, ongoing deflation is expected). In this post, we describe and evaluate an
alternative, market-based measure of Japanese inflation expectations based on
international price parity conditions. We find that recent inflation
expectations have attained a level substantially higher than their previous
peaks over the past three years.

By way of background, recent policy
action by the Bank of Japan has shone a spotlight on Japanese inflation
expectations. On April 4, the Bank announced a program called Quantitative and Qualitative Monetary
Easing (QQE), which was a pledge to drastically ramp up asset
purchases to increase the monetary base, and to extend the duration of assets
held on the Bank’s balance sheet. Since nominal yields on Japanese government
bonds have been quite low for some time, a preferred indicator of QQE’s success
would be a decline in real interest rates as inflation expectations move closer
to the Bank’s recently announced 2 percent price stability target.

Measurement Issues
How does one go about measuring Japanese inflation expectations? The
consensus on this topic is that there is no single reliable measure. A commonly
used market-based gauge of U.S. inflation expectations is the difference in
yield between nominal and Treasury inflation-protected securities (TIPS)—the
breakeven inflation rate. Analogous measures come from over-the-counter
derivatives called inflation swaps. In Japan, the market for
inflation-protected government bonds, called JGBi’s, is very thinly traded and
a majority of the issuance has been bought back by the Ministry of Finance in
recent years. These factors have cast doubt on the ability of JGBi prices to
convey reliable information about inflation expectations. Swaps suffer from
similar liquidity issues.

Alternative extant measures of
inflation expectations are available from surveys of households, investors, and
professional forecasters. However, survey responses may by formed in a
backward-looking manner, making them more responsive to actual inflation than predictive
of the future. The range of views offered by market‑ and survey-based measures
is illustrated in the chart below. While measures of five- and ten-year
expectations have converged somewhere around 1 percent in recent months, in the
past analysts would have little confidence of even getting the correct sign of
expected inflation by looking at any given measure. 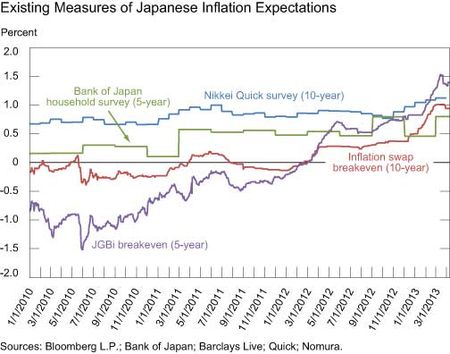 A Measure Based on Purchasing Power Parity
Given these concerns, we consider an additional market-based measure derived
from U.S. inflation expectations—for which there are more actively traded
inflation‑protected securities and swaps markets—and international price parity
conditions. To our knowledge, these tools are not commonly used to make
inferences about Japanese inflation expectations, but may provide a useful
alternative to Japanese JGBi’s and swaps. One exception is a report by Goldman
Sachs Economics Research (“The Market Consequences of Exiting Japan’s Liquidity
Trap,” Global Economics Weekly 13/05,
February 2013), which uses the thirty-year yen/dollar forward rate to infer Japanese
inflation expectations.

The measure relies on purchasing power parity (PPP), which equates
the price level in one country to the price level in a second country and the
two countries’ nominal exchange rate. PPP has been shown to work relatively well
over longer periods as well as in relative terms; that is, it works better in
changes than in levels. In the case of Japan, PPP implies that the change in expected
future Japanese prices (a close analogue to inflation expectations) is equal to
the change in expected future U.S. prices plus
the change in the expected future value of the yen. We implement this measure
using the corresponding breakeven rate for U.S. inflation implied by TIPS and
the yen/dollar forward exchange rate.

The chart below uses daily data and shows
the resulting PPP-implied Japanese inflation expectations for five-, seven-,
and ten-year horizons since January 2010. Note that the timing of fluctuations
in expectations suggests that they are related to policy actions, since each peak
over the past three years has followed a major policy innovation. In October
2010, the Bank of Japan’s introduction of the Asset Purchase Program
spurred a rise in expectations, which was then undone by mid-2011. In February
2012, the Bank introduced a 1 percent price stability goal,
which prompted another, less pronounced, change in inflation expectations that
was again undone after a few months. Most recently, inflation expectations have
increased following the election of Shinzo Abe as leader of Japan’s Liberal Democratic
Party in September 2012 and subsequently as prime minister in December, marking
the beginning of a policy regime commonly referred to as “Abenomics.” By our
measure, post-Abenomics inflation expectations have attained a level
substantially higher than the previous two peaks. 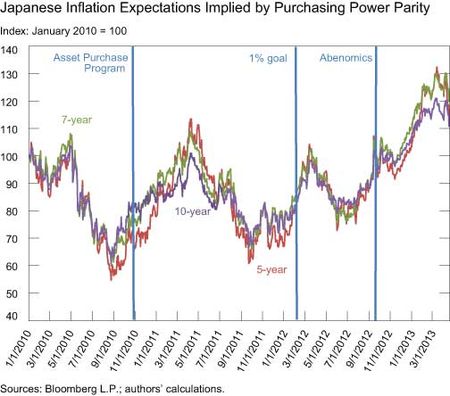 A Check of the Methodology
We can check the robustness of the PPP-implied measure by applying the same
logic to different country pairs. If the movements in our measure of inflation
expectations are not driven by idiosyncrasies in U.S.-Japan financial markets,
then substituting another nation’s forward exchange rate and breakeven inflation
rate for the respective U.S. rates should yield similar results. The United
Kingdom is a natural candidate for the role of “other nation” here, given its
relatively liquid inflation-protected security markets. Hence, we use the
pound/yen forward rate and U.K. breakeven inflation rates to produce the
PPP-implied measure of Japanese inflation expectations shown in the chart below
(plotted alongside the analogous U.S.-based measure from above). While not always
perfectly aligned in levels, the two series have been highly correlated—with
a correlation coefficient of 0.66–in their day-to-day movements since 2010. 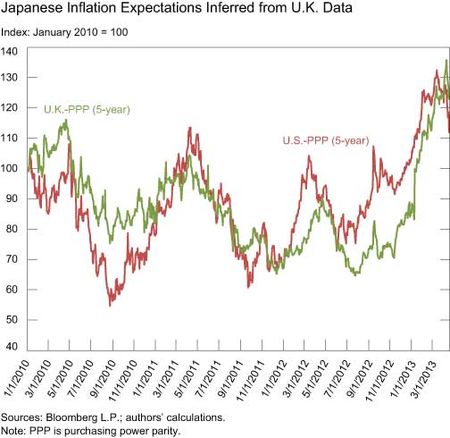 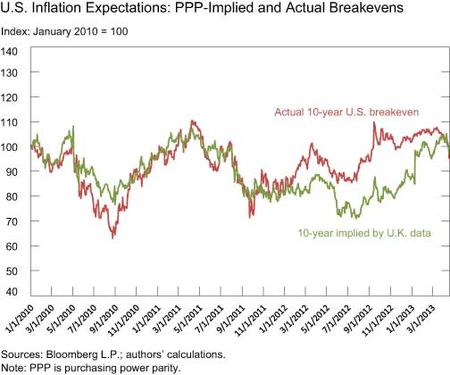 In summary, PPP provides an
alternative, market-based view of Japanese inflation expectations, which appear
to have been quite responsive to recent monetary policy innovations by the Bank
of Japan. Moreover, the similarity of the measures across time periods (five-, seven-,
and ten-year) and country pairs (U.S.-Japan, U.K.-Japan, and U.S.-U.K.) gives
some comfort that PPP implies a robust reading of inflation expectations more
generally.

Benjamin R. Mandel is an economist in the Federal Reserve Bank of New York's Research and Statistics Group.

Geoffrey Barnes is a senior research analyst in the Research and Statistics Group.