As seen in the chart below, the share of twenty-five-year-olds with student debt has increased from just 25 percent in 2003 to 43 percent in 2012. Further, the average student loan balance among those twenty-five-year-olds with student debt grew by 91 percent over the period, from $10,649 in 2003 to $20,326 in 2012. Student loan delinquencies have also been growing, as shown in the recent presentations by New York Fed economists Donghoon Lee and Wilbert van der Klaauw. 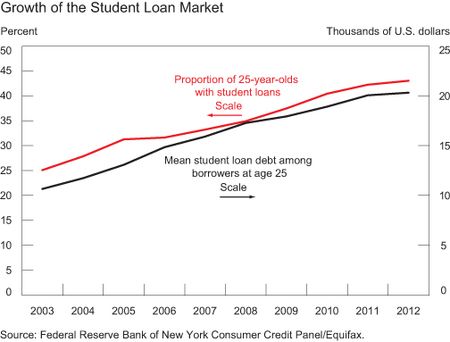 According to the National Association of Realtors, the median age at first home purchase has, historically, been stable at around thirty years of age. While roughly a third of homeowners own their homes outright, this is true of only a small minority of young homeowners. Hence we take the presence of home-secured debt as an indicator of homeownership among thirty-year-olds in the Consumer Credit Panel. The next chart shows the trends in the rates of (inferred) homeownership over the last decade for thirty-year-olds with and without histories of student debt. 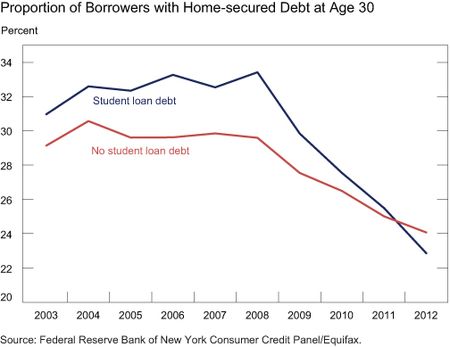 Vehicle purchases tend to predate home purchases for U.S. consumers, and so we look at auto debt at age twenty-five as an indicator of this common post-schooling economic activity. Auto debt is a less effective proxy for auto ownership than home-secured debt is for homeownership, since many young workers inherit older vehicles or purchase them outright. However, our auto debt data provide some indication of the rates at which young consumers participate in markets for new and late-model used cars. 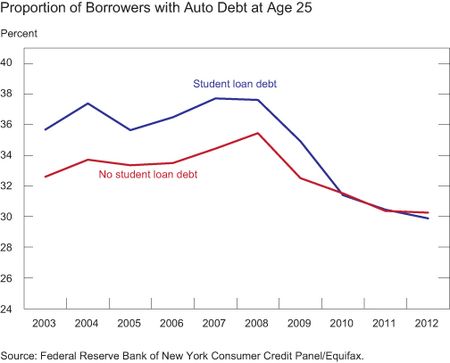 Putting these three trends together, we turn to the behavior of total debt per capita for the young over the past decade. While evidence on the rapid growth of the student loan market has raised concerns about the effects of the associated debt burden on younger generations of U.S. consumers, the decline in student borrowers’ use of other debt during the Great Recession has overwhelmed the observed student loan growth. As a result, although per borrower student debts are larger than ever, the total debt per capita of student borrowers and nonstudent borrowers followed approximately parallel increases during the boom, and approximately parallel declines during the Great Recession. 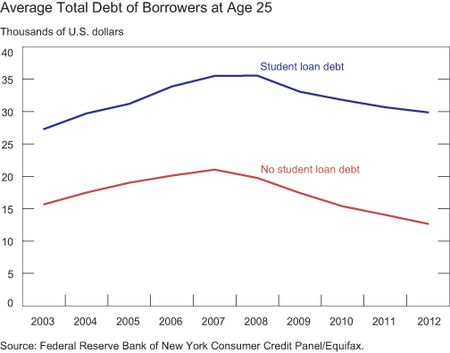 
The decline in participation in nonstudent debt markets by those with a history of educational debt may be driven by a number of factors. First, a weakening in the labor markets since 2007—near the peak of consumer debt—has likely lowered graduates’ expectations of their future income. The decline in participation in the housing and auto debt markets may be a result of graduates decreasing their consumption, and thus debt, levels in response to these lowered expectations.


However, there is a second factor that could also be driving these changes: access to credit. In response to the recent recession and credit crunch, lenders have tightened underwriting standards in all major consumer debt markets. Consumers with substantial student debt may not be able to meet the stricter debt to income (DTI) ratio standards that are now being applied by lenders. In addition, delinquency in repayment has become more prevalent among student borrowers. Lee finds that delinquent student borrowers are extremely unlikely to originate new mortgages.


Our own analysis demonstrates a divergence in the credit scores of student borrowers and nonborrowers. The chart below shows trends in mean Equifax risk scores for twenty-five- and thirty-year-old borrowers with and without student debt histories. The trends for twenty-five-year-olds with and without student loans, and those for thirty-year-olds with and without student loans, lie on average 3 points apart from 2003 to 2008. From 2008 to 2012, however, the student-loan trends diverge from the no-student-loan trends. By 2012, the average score for twenty-five-year-old nonborrowers is 15 points above that for student borrowers, and the average score for thirty-year-old nonborrowers is 24 points above that for student borrowers. As a result of tighter underwriting standards, higher delinquency rates, and lower credit scores, consumers with educational debt may have more limited access to housing and auto debt and, as a result, more limited options in the housing and vehicle markets, despite their comparatively high earning potential. 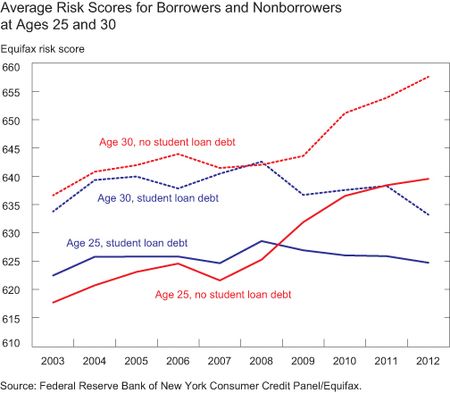 Sydnee Caldwell is a senior research analyst in the Research and Statistics Group.

Do you have the mortgage and auto debt data for all age groups? Is is possible to get the data series? Thanks

Very informative article. Thanks for the information and detailed analysis. Consumers with educational debt may have more limited access to housing and auto debt and more, and I’m one of it. Am I still will be influenced by this if I clear my education loan?