Although
the unemployment rate of workers with a college degree has remained well
below average since the Great Recession, there is
growing concern that college graduates are increasingly underemployed—that
is, working in a job that does not require a college degree or the skills
acquired through their chosen field of study. Our recent New
York Fed staff report indicates that one important factor affecting
the ability of workers to find jobs that match their skills is where they look for a job. In
particular, we show that looking for a job in big cities, which have larger and
thicker local labor markets (that is, bigger markets with many buyers and
sellers), can give workers a better chance to find a job that fits their skills.

Theoretical
research in urban economics suggests that the large and
thick local labor markets found in big cities can increase the likelihood of job
matching and improve the quality of these matches. These benefits arise because
big cities have more job openings and offer a wider variety of job
opportunities that can potentially fit the skills of different workers. In
addition, a larger and thicker local labor market makes it easier and less
costly for workers to search for jobs.

Our research focuses on whether
college graduates located in big cities are better able to find jobs that match
the skills they’ve acquired through their college education. We utilize newly
available census data that identify both an individual’s level of education and,
for college graduates, undergraduate college major. We construct two measures
of what we call job matching for those with a bachelor’s degree. Our first
measure, which we refer to as college degree
matching, determines whether an undergraduate degree holder is working in
an occupation that requires at least a bachelor’s degree. Our second measure, which
we call college major matching, gauges the quality of a job match by identifying
whether a person is working in a job that corresponds to that person’s undergraduate
major. For example, consider a college
graduate who majored in Communications. If this person worked as a public relations manager, an occupation
that both requires a college degree and relates directly to a Communications
major, we would classify this person as matching along both measures. By
contrast, if this person worked as a retail
salesperson, he or she would be classified as not matching along either measure.

What percentage of college graduates match along these two dimensions?
As the chart below shows, we find that close to two-thirds of
college graduates in the labor force work in a job requiring a college degree, while
a little more than a quarter work in a job that is directly related to their
college major. 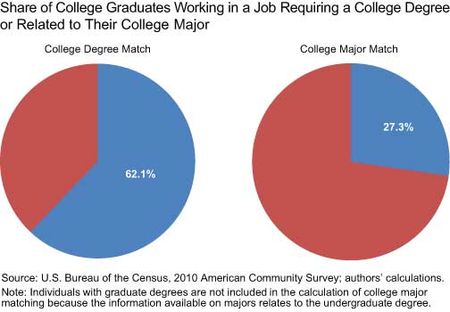 In our staff report, we estimated
the relationship between the size and density of a metropolitan area and the
probability of job matching to examine whether big cities help college
graduates match into better jobs. Estimating these relationships turns out
to be quite challenging because biases may result if either the workers or job
opportunities in big cities are systematically more or less conducive to job
matching. To address this difficulty, our analysis controlled for a wide array
of worker characteristics, such as age, gender, marital status, and college
major. We also controlled for characteristics of the metropolitan area in which
these individuals were located, such as industry structure and differences in
economic performance.

The chart below shows our estimates
of the probability of job matching across the urban spectrum for each of our
measures. The horizontal axis measures the size of a metropolitan area in terms
of population and is marked in percentiles. (The correlation between metropolitan area size and density
is quite high, so the results along either dimension are similar.)
To put these percentiles into perspective, St. Cloud, Minnesota, which has a
population of about 190,000, is at the 25th percentile; while Chicago,
with a population of more than 9 million, lies above the 95th
percentile. 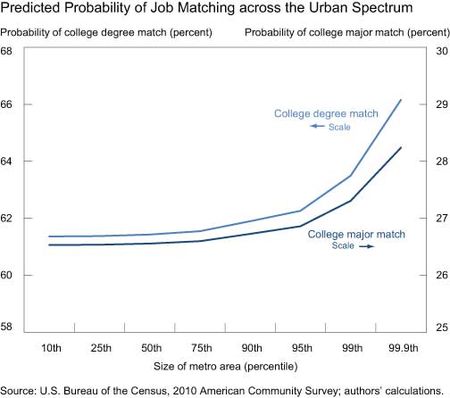 Given the expense of college and the
potential difficulty faced by graduates in finding a job that utilizes the
skills obtained through higher education, improving the chances of finding a
good job is clearly important. Our work suggests that living in a big city can
help.

This is a good research note and makes total sense. However, the main question is how do you address the endogeneity problem – that in order to afford living in a big city you need to have a job offer in that city before hand. There may be two groups of people who can benefit from a higher probability of a job that matches their skills: those college students who grew up in a big city and are able to go back to their parents’ home and then look for a job, and those with a more wealthy background who may afford a few months of living in a big city before finding a job that matches their skills. How do you address the rest of the population who can’t afford to live in a big city without any financial support?