Traditionally, we have thought of the fates of specific banks as perhaps symptomatic of problems in the financial market but not as causal determinants of fluctuations in aggregate investment and other real economic activity. However, the high level of bank concentration in much of the OECD (Organisation for Economic Co-operation and Development) means that large amounts of lending are channeled through a small number of institutions that are no longer small even in comparison to the largest economies. Consequently, problems in a few large institutions could potentially have a large impact on aggregate lending and on real output. Our study of Japanese lending markets is the first to provide a causal link between bank shocks and firm-level investment rates. The results indicate that 40 percent of aggregate lending and investment volatility over the past two decades can be tied to the idiosyncratic successes and failures of financial institutions.

The notion that financial institutions are large relative to the size of economies is not something that plays a prominent role in traditional economic theory. Macroeconomic textbooks tend to treat economies as composed of representative firms that are infinitesimal in size compared to any given market. As a result, positive and negative idiosyncratic shocks to financial institutions cancel out due to the law of large numbers.


However, this representation stands in stark contrast with the reality of concentration in financial markets. A striking regularity is that a few banks account for a substantial share of an economy’s loans. We see this clearly for Japan in the chart below, which graphs each bank’s share of total loans to listed companies. In 2010, the three largest institutions—Mitsubishi UFJ Financial Group, Mizuho Financial Group, and Sumitomo Mitsui Financial Group—accounted for 54 percent of total lending. The chart also shows the level of concentration increased dramatically, beginning in 2000. This increase in concentration arose from changes in regulations that allowed the creation of holding companies, enabling a spate of financial institution mergers. 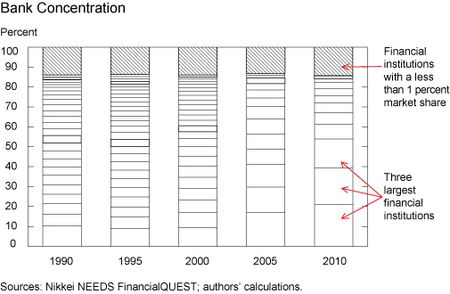 While one might think that a highly concentrated financial sector is an oddity of Japanese finance, this high level of concentration is, in fact, the norm in many industrialized countries. For example, in the United States, the three largest institutions—Bank of America, J.P. Morgan, and Citigroup—accounted for 49 percent of all banking assets in 2010. (See Federal Financial Institutions Examination Council (2011) Annual Report 2010, March 31.) While the three largest lenders only accounted for 32 percent of all U.S. commercial and industrial lending, the point remains that Japanese financial concentration is not that different from that of the United States.


However, if markets are dominated by a few financial institutions, cuts in lending due to some change in financial conditions in just a small number of banks have the potential to substantially affect aggregate lending. Moreover, if firms find it hard to find good substitutes for loans like issuing equity or debt, then it is possible for their investment rates to fall as well.

Our research enables us to understand the role played by granular shocks by developing a new methodology to isolate what is happening in banks relative to what is happening with their borrowers. We do this using a matched bank-firm data set from Nikkei NEEDS FinancialQUEST for the period 1990 to 2010, which reports short- and long-term loans by financial institution for all firms listed on any stock exchange.


Because we observe the lending of multiple institutions to the same firm, we are able to separate what part of lending is due to changes in a particular borrower and what part is unique to each bank. For example, if two banks lent to the same set of borrowers and one bank expanded lending to each borrower while another contracted it, we could be fairly certain that the first bank experienced a positive idiosyncratic lending shock relative to the second one. Similarly, if, in a given industry, one firm increases borrowing more from a given bank than another firm, it is likely that the first firm experienced a positive credit shock. While the econometrics is more involved and takes into account the fact that not every bank lends to every firm, these examples provide the basic intuition for how we separately identify each bank’s shocks.


Importantly, we can document that credit shocks of individual financial institutions are large and not possible to predict based on the performance of their borrowers or the macroeconomy. For instance, it is very hard to forecast which institutions will do well in a crisis and which will do poorly. Thus, one cannot simply understand what is happening in a financial crisis by staring at macro aggregates. Moreover, our estimated bank credit-supply shocks make sense. We show they are strongly correlated with capital injections, risk-based capital ratios, and market-to-book values. This result establishes that our econometric methodology picks up the factors we think are important in generating bank shocks.


Our estimation of the bank shocks enables us to establish a direct relationship between bank loan-supply changes and the investment rates of firms. This link is the critical one between financial sector and the real sector because a major reason why firms borrow is to invest. Since we are able to estimate separate firm credit-demand and loan-supply shocks, we are able to show that bank shocks have a large impact on firms’ investment if firms borrow heavily from banks. Our result implies that listed companies that use lending to finance more than 14 percent of their assets cannot easily substitute away from the lending of a financial institution facing credit constraints.