The New York Fed has long collected market
information from its primary dealer trading counterparts and released these data in
aggregated form to the public. Until recently, such data have only been
available for broad categories of securities (for example, Treasury bills as a
group) and not for specific securities. In April 2013, the Fed began releasing
data on some specific Treasury issues, allowing for a more refined
understanding of market conditions and dealer behavior.

The Fed publicly releases summary
data each Thursday afternoon, one week after they’re collected. The data are
aggregated across all dealers. Moreover, until recently, data were only
available for broad securities categories and not for specific Treasury
security issues. The aggregated data have been analyzed in numerous studies to
better understand dealers’ aggregate position taking, financing activities, and settlement stresses. The transaction data in particular are widely
cited as a gauge of market activity, and allow each reporting dealer to gain a
sense of its market share in various products.

Specific Issue Data Now Available
Starting with data covering the week ending April 3, 2013, the Fed now also
releases aggregated primary dealer data on specific Treasury issues. In
particular, the data cover dealer activity in the most recently issued Treasury
notes and bonds, including both nominal securities as well as Treasury
inflation-protected securities; specific issue data are not collected for bills.
As with the broad security category data, the released data are aggregated
across dealers and reported weekly as of the week ending Wednesday.

What the Data Show
We present a few charts below to help illustrate the newly released data and give a sense as to how the data are useful. The following chart, for example, plots the newly released transaction data for the nominal notes and bonds. It shows that the nominal five- and ten-year notes are the single most active Treasury securities, with daily activity recently averaging about $100 billion each. 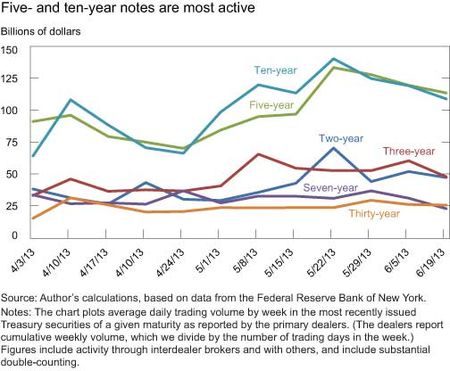 By
comparing activity in these specific issues with the aggregated data, one can
infer that these six issues account for about 62 percent of all trading in nominal
Treasury securities, even though they represent a tiny fraction of the roughly
300 nominal Treasury securities outstanding. This illustrates the widely known
phenomenon whereby trading activity concentrates in the most recently sold (that
is, on-the-run) Treasury securities, with trading dropping sharply following the
auction of a new security. The high concentration of trading in the on-the-run
securities makes the issues especially liquid, allowing market participants to
transact in large size with minimal price impact.

By looking separately at reported
activity through interdealer brokers or with others, one can see that the
specific issues account for about 71 percent of all Treasury security trading
through interdealer brokers, but only 55 percent of Treasury security trading
with others. This is consistent with the idea that the dealers rely highly on
the liquidity of the on-the-run securities to transfer interest rate risk among
themselves. Interestingly, the 71 percent share for interdealer trading nearly matches
the share calculated in this analysis by Fabozzi and Fleming (2004) using a less
comprehensive source of interdealer data from 1998. 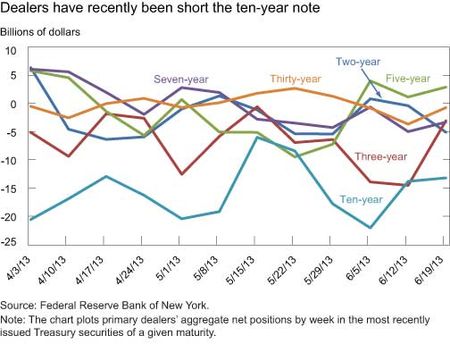 Our last chart plots dealers’
failures to deliver specific nominal Treasury issues; a plot of failures to
receive looks similar. (As explained in a 2005 New York Fed study, a settlement failure occurs when the seller of
a security fails to make delivery to the buyer on the agreed-upon settlement date.)
The chart shows a large spike in settlement fails in the ten-year note,
starting in the week ending June 5 and ending in the week ending June 19. 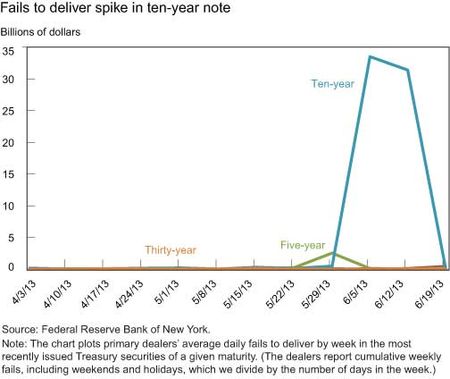 Generally speaking, fails tend to
increase when issues get expensive to borrow. Moreover, issues get expensive to
borrow when there’s high borrowing demand or low lendable supply. In this
particular case, we know that dealers had a large short position in the ten-year
note. While the dealer data aren’t comprehensive, they’re suggestive of a large
short base in the ten-year note and of the resulting high borrowing demand
leading to a high level of fails.

The decline in fails in the week
ending June 19, in contrast, is likely attributable to supply considerations. Current
Treasury policy is to issue a new ten-year nominal note every three months, but
to sell additional quantities of the on-the-run note one and two months after
its original issuance. The Treasury thus issued $24 billion of a new ten-year
note on May 15 and an additional $21 billion of the note on June 17. The
additional issuance increased lendable supply, thereby easing the settlement
disruptions in the note.

Going Forward
Our review of the newly released specific issue data is less than
comprehensive, but intended to give a flavor for what the new data look like
and how they can be used. While the released data are new, they already provide
a finer view of conditions and behavior in the Treasury market, and confirm the
key role of the most recently issued securities for managing interest rate risk.
The benefits of the data are likely to grow over time as a history develops
with which the data can be analyzed more fully.