A Brief History of U.S. Leveraged Buyouts
The dramatic surge in LBO activities in the 1980s was made possible by the emergence of the high-yield bond market as the dominant source of financing for speculative-grade debt (see the chart below). While default was very rare among LBO firms in the early 1980s, by the end of the decade, excess speculation and overpriced deals became quite pervasive. Following several high-profile corporate bankruptcies, the junk bond market imploded in 1989. After the collapse of the junk bond market, interest in LBOs cooled off considerably in the 1990s. Facing new, more stringent risk-weighted capital requirement rules and more intense regulatory scrutiny, commercial banks also contributed to the declining interest in buyouts by refusing to finance deals. 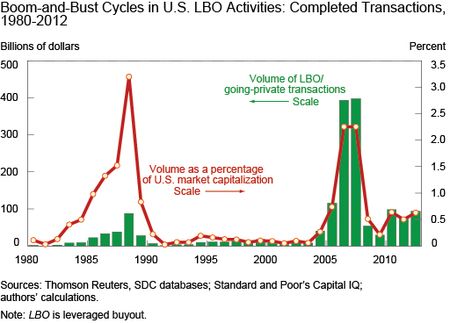 
Despite the collapse of the asset securitization market, buyout activities have slowly reemerged over the last few years. In many ways, the LBO market has performed considerably better in the years following the recent financial crisis than it did in the wake of previous downturns. For example, the collapse of the junk bond market in the late 1980s was more onerous for LBO sponsors that struggled to find alternative sources of financing for many years.


The Profile of LBO Targets
LBOs are a mechanism for disciplining inefficient corporate organizations and realigning the interests of stockholders and management. Agency problems—that is, conflicts of interest between stockholders and management—are more prevalent in low-growth stable firms with substantial free cash flows. Managers of these firms are more likely to squander these cash flows on unprofitable investment projects. LBOs mitigate these agency conflicts by enabling managers to own a larger stake in the firm and enhance managerial discipline through the high debt service imposed on the firms. The downside of greater leverage, however, is that it also raises default risks for debt-laden buyout targets that become more vulnerable to economic downturns and industry-specific shocks. The importance of these firm features is seen in the table below, which shows that buyout targets generated significantly greater free cash flow and had lower investment spending than did their non-LBO peers over the last three decades. 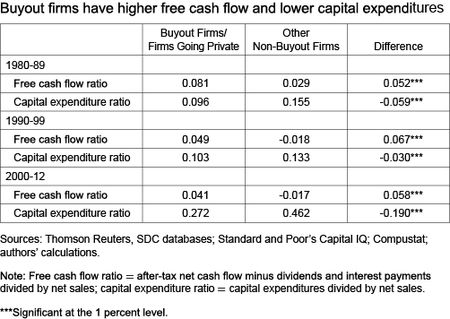 
In a recent paper in the New York Fed’s Staff Reports series, we document that many of the companies electing to go private did so only about five years after they went public for the first time. We find that the desire among these relatively young firms to go private is attributable to their inability to attract sufficient financial visibility, measured by analyst coverage (see the chart below). One of the potential benefits of going public is that these firms would be more closely monitored by security analysts that collect and disseminate valuable information to investors. 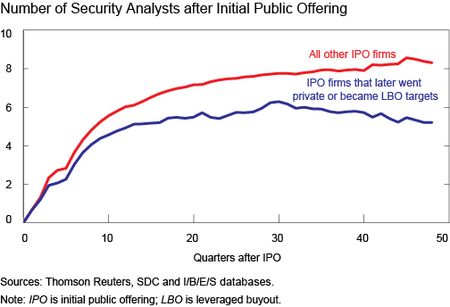 Stavros Peristiani is an assistant vice president in the Research and Statistics Group.
Posted by Blog Author at 07:00:00 AM in Corporate Finance