« Historical Echoes: Throwing Coins into a Fountain—Who Is Getting Paid? | Main | Dealer Balance Sheet Capacity and Market Liquidity during the 2013 Selloff in Fixed-Income Markets »

A Look at Bank Loan Performance

U.S. banks experienced a rapid rise in loan delinquencies and defaults during the 2007-09 recession, driven by rising unemployment and falling real estate prices, among other factors. More than four years on from the official end of the recession, how do things look now?

The chart below highlights the striking deterioration in bank loan performance during the 2007-09 recession period. (This chart, like others in this post, is drawn from the most recent edition of the New York Fed’s report Quarterly Trends for Consolidated U.S. Banking Organizations.) At the start of 2007, only about 1 percent of bank loan balances were “nonperforming,” meaning that the loan was at least ninety days past due or in nonaccrual status. By late 2009, however, the fraction of nonperforming loans (NPLs) had increased to more than 5 percent. For the largest bank holding companies (those with consolidated assets exceeding $500 billion), the fraction of nonperforming loans increased even more rapidly, reaching a peak of 7.3 percent in fourth-quarter 2009. 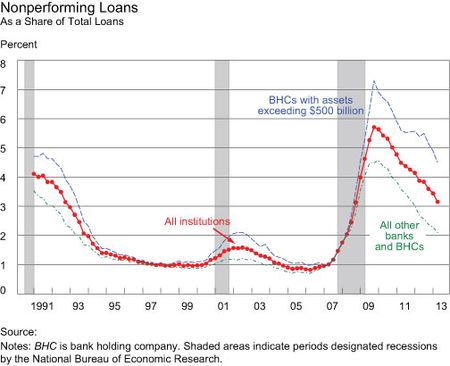 The overall performance of loans in banking portfolios has improved substantially since 2009. The aggregate NPL ratio has declined in each of the past fourteen consecutive quarters and now sits at 3.1 percent, compared with its crisis peak of 5.7 percent. Despite this improvement, however, the fraction of nonperforming loans still significantly exceeds pre-recession levels.

Digging a little further into the data, we see notable differences in performance trends by loan type. First, let’s take a look at commercial and industrial (C&I) loans, a category that includes credit lines, plant and equipment loans, and financing for inventory and for other corporate assets (not including real estate). Not surprisingly, C&I loan performance tends to move closely with the business cycle, with peaks in the nonperforming loan ratio associated with each of the last three recessions. The NPL ratio for C&I loans has declined sharply since 2009, reflecting improved macroeconomic conditions and the recovery in corporate profits. The ratio now sits below 1 percent, well below its historical (1991-2013) average. 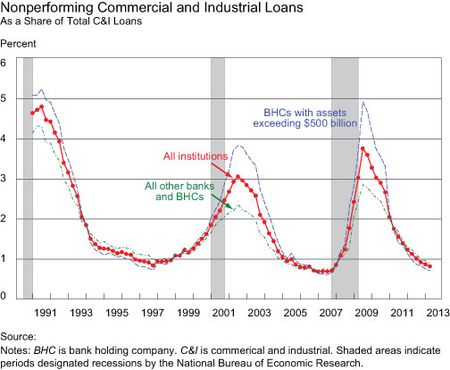 The fraction of nonperforming consumer loans has also recovered significantly since the end of the recession. This category includes credit cards, auto loans, and other types of personal loans not backed by real estate. Historically, consumer loan delinquency is less correlated with the business cycle than C&I loan performance, as can be seen from the chart below. While the share of nonperforming consumer loans surged from 2007 to 2009, there was no corresponding spike during the two previous recessions.

The consumer loan NPL rate has fallen by more than half since 2009, and now actually lies below pre-recession levels. Only 1.1 percent of consumer loan balances are currently nonperforming, a level last seen in 1995. 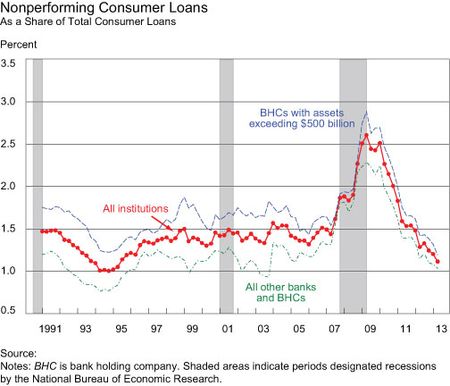 What about student loans? The New York Fed’s Quarterly Report on Household Debt and Credit has documented a rise in the fraction of delinquent student loans in recent years, as well as a surge in the amount of student debt outstanding. But although student loan balances are reflected in the graph above, to date they have been only a modest contributor to banking sector loan delinquencies and losses. One important reason is that most student loans are issued or guaranteed by the federal government. Student loans are classified in bank and bank holding company regulatory reports as part of “other consumer loans.” This category, which also includes non-credit-card personal loans and revolving credit plans, accounts for 2.6 percent of delinquent bank loan balances and 9.7 percent of total loan charge-offs as of second-quarter 2013.

The performance of the residential real estate loans held in banking portfolios showed a relatively muted recovery compared with the performance of C&I and consumer loans. Currently, 7.7 percent of residential mortgage debt is ninety days or more past due, only slightly below the 2009 peak. This persistently high delinquency rate likely reflects a range of factors, including the slow resolution and foreclosure process for delinquent loans in many states, as well as the lingering after-effects of the mortgage credit boom and subsequent collapse in home prices. Note that the fraction of nonperforming mortgages is about three times higher for the largest bank holding companies (the six firms with total assets exceeding $500 billion) than for the rest of the commercial banking industry. 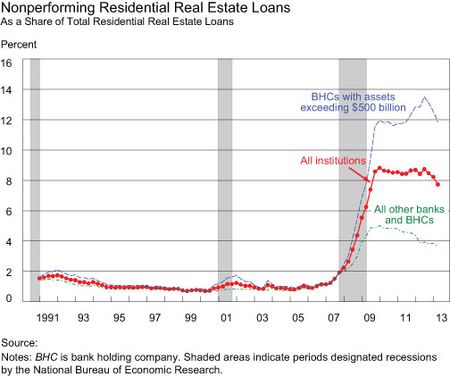 Residential mortgage performance since 2007 represents a striking departure from historical patterns. Even though the nonperforming loan ratio has exceeded 7 percent for the past sixteen consecutive quarters, it didn’t even reach 2 percent at any point between 1991 and 2006. Prior to the financial crisis, residential mortgages were often thought to have relatively little credit risk, in part because the loan is collateralized by an asset (a house or apartment) that generally increases in value from one year to the next while the balance on the loan declines over time owing to amortization. Of course, contrary to this pattern, U.S. home prices fell sharply in the late 2000s, compounded by weak loan underwriting standards during the prior mortgage credit boom. Taking a longer historical view, we note that residential mortgage delinquencies and defaults were also high during the Great Depression, the last period during which the U.S. experienced a sustained national decline in home prices. 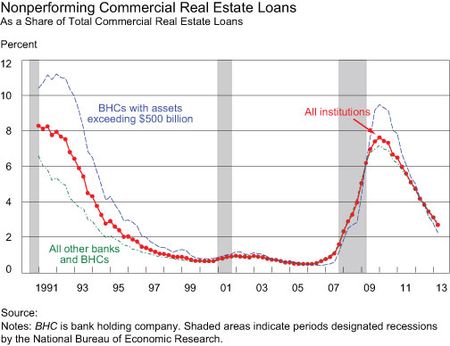 To sum up, the performance of loans in U.S bank portfolios has improved significantly, albeit unevenly, since the end of the 2007-09 recession. Differences in performance across major loan categories reflect key features of the recession itself, in particular the central role played by the collapse in real estate prices and fall in personal consumption. In the future, the tighter underwriting standards applied to more recent loan cohorts would suggest that the fraction of nonperforming loans may continue to fall over time, as earlier loan vintages become a progressively smaller share of bank portfolios. As in recent history, however, macroeconomic and financial market conditions are likely to be the main determinant of bank loan performance going forward.

Tara Sullivan is a senior research analyst in the Federal Reserve Bank of New York's Research and Statistics Group.

James Vickery is a senior economist in the Research and Statistics Group.
Posted by Blog Author at 07:00:00 AM in Crisis, Financial Institutions

Thanks very much for the comments.

We haven’t fully disentangled the reasons why the residential mortgage nonperforming loan ratio is so much higher for the largest BHCs, though we agree with you, it is a pretty striking feature of the data. Some possible explanations:
(i) Large BHCs were more actively involved in the securitization of nonagency mortgages prior to the crisis. This is likely to be part of the story, for example because some loans in securitization trusts that performed poorly were “put back” to the securitization issuer.
(ii) The geographic composition of loans differs between large and small banking firms. Large BHCs tend to have a higher market share in urban areas; these areas also experienced a more pronounced property price boom and bust during the 2000s.
(iii) Large BHCs have historically purchased a number of firms with mortgage portfolios that have performed poorly in recent years (e.g. Bank of America’s acquisition of Countrywide).
(iv) Risk-taking incentives may have differed across large and small banking firms during this period, due to differences in executive compensation, corporate governance, and perceptions about the likelihood of implicit public guarantees or backstops for “too big to fail” firms.
(v) Large BHCs originated a significant fraction of loans through nonbank mortgage subsidiaries. As documented in a recent Cleveland Fed research paper (http://www.clevelandfed.org/research/workpaper/2012/wp1220r2.pdf) these loans tended to be riskier and have higher default rates than loans originated by commercial bank subsidiaries of the same BHC. (For an explanation of the difference between banks and bank holding companies, see this previous Liberty Street Economics blog post (http://libertystreeteconomics.newyorkfed.org/2012/07/peeling-the-onion-a-structural-view-of-us-bank-holding-companies.html)

Studying the relative contributions of these different factors in more detail would be a great topic for future research. Interestingly, the higher nonperforming loan ratio for large banking firms is actually present over the entire sample period. For example, although the peak of the residential mortgage nonperforming loan ratio was pretty low during the 2001-02 downturn, proportionately the increase in NPLs was much higher for the largest BHCs.

As you also point out, the continued high delinquency rate for residential mortgages is striking by comparison to commercial real estate loans and consumer loans, categories where loan performance has improved markedly in recent years. Loan maturity is one important point of difference between consumer loans and residential mortgages. Since consumer loans tend to have shorter terms, lenders can improve the average quality of their loan portfolio relatively quickly by tightening lending standards. In contrast, most residential mortgages have a 30-year maturity -- many mortgages that are nonperforming today were originated prior to the financial crisis, during a period when lending standards were looser than now. The process of resolving the historically large number of nonperforming mortgages has also been extremely slow due to resource constraints among mortgage servicers, legal bottlenecks in states with judicial foreclosure, and other factors. These issues likely account for at least part of the difference between residential and commercial mortgage performance in recent years. For a more detailed discussion of these issues related to “limbo loans”, see this recent New York Fed working paper (http://papers.ssrn.com/sol3/papers.cfm?abstract_id=2018948).

The consumer loan NPL rate has fallen by more than half since 2009, and now actually lies below pre-recession levels.

This is a very interesting analysis, which leads me to ask a few questions:

1) Overall, but particularly with respect to residential mortgages, delinquincy rates are much higher for the large (>$500B) banks than for other banks. How would you explain this difference? Did large banks issue more low quality loans? Have they responded differently to falling house prices (ie willingness to modify loans)?

2) While you note that commercial real estate delinquincies remain elevated compared to historical norms, it seems clear from the data that CRE delinquincies have fallen more than RRE delinquincies, and that the big bank/small bank difference doesn't show up here. Have banks managed delinquint commrecial RE loans differently than delinquent residential RE loans? I would note that the sharp decline in consumer loan delinquincies would seem to militate against an explanation based solely on different growth rates for household income vs. business income.