Long Island’s Economy Back on Track after Sandy

In late October last year, Superstorm Sandy devastated and disrupted much of the tri-state region, including a large swath of Long Island. For most of Suffolk County and inland parts of Nassau County, the disruptions were widespread but relatively short lived—they mostly involved power, transportation, and communications outages. However, the southern coast of Nassau County was particularly hard hit, and the recovery in cities like Long Beach has taken considerably longer. Overall, though, Long Island’s economic rebound appears to be progressing well. In this post, we give a short overview of the Island’s economy and track its performance before and after Sandy.

Long Island’s Economy
Long Island—comprising Nassau and Suffolk counties—has a large and diverse economy with a formidable industry base. Defense and technology have historically been a key industry cluster in Suffolk County, anchored by Brookhaven National Laboratory and Cold Spring Harbor Laboratory. Nassau County is more specialized in local-market industries, such as wholesale and retail trade and private education and health services. Nassau’s economy is closely linked to New York City’s: More than 30 percent of working residents commute to the city’s five boroughs. One of Long Island’s greatest assets is its human capital—the average resident is relatively well educated and affluent. Still, there are pockets of poverty and areas whose real estate markets were affected substantially by the subprime crisis. A full profile of Long Island’s economy can be found on our regional website.

Long Island lagged the United States in job growth during the mid-2000s, but it saw milder job losses than the nation did during the recession—4 percent versus 6 percent. From the end of the recession in 2009 until last autumn, however, Long Island closely tracked the U.S. economy in terms of job growth, as the chart below shows. As of last October, Long Island had recouped more than 90 percent of the net jobs lost during the downturn. 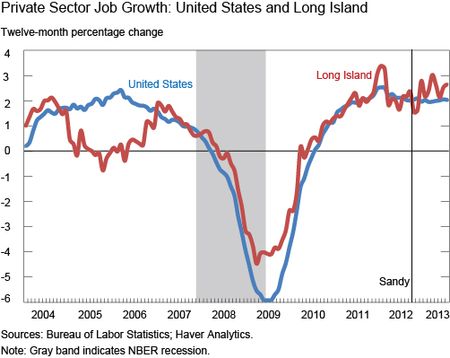 Other sectors of Long Island’s economy, though, showed less resilience—like construction and real estate. Home prices fell substantially before, during, and after the recession; as of last autumn, prices in Nassau and Suffolk counties were 21 percent and 24 percent, respectively, below their 2006 peaks. State and local government also saw steep job cuts. In fact, both counties had fiscal crises in recent years—Nassau in 2011 and Suffolk in 2012. And then came Sandy, which walloped Long Island and threatened to derail its recovery.


The Impact of Sandy
Parts of Long Island were devastated by Sandy. According to FEMA, $309 million in grants was approved for Nassau County—more than for any other county in New York State—with an additional $74 million going to households in Suffolk County. In the two counties combined, an estimated 95,000 buildings were damaged or destroyed and nearly 10 percent of homes experienced some form of flooding. Even beyond the physical destruction it caused across much of the Island, Sandy had an enormous disruptive effect on the local economy. During the first week of November, more than a million customers (homes and businesses) were without power. Many were without heat as well, and gasoline shortages followed.

Based on monthly seasonally adjusted employment data, nearly 6,000 jobs were lost between October and November in Nassau County alone; another 2,000 job losses occurred in Suffolk County, which wasn't hit nearly as hard by the storm. Moreover, within Nassau County, the economic effects were geographically concentrated in coastal and low-lying cities and towns such as Oceanside, Freeport, and Massapequa (see map). But perhaps the most heavily affected city was Long Beach—one of the most densely populated communities in Nassau County. While timely economic statistics aren’t available for localities, it’s certainly likely that Long Beach and nearby cities and towns along the bay suffered much steeper job losses, in percentage terms, than the rest of Long Island. 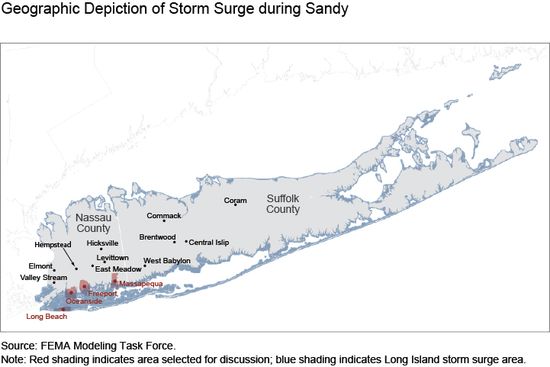 The Rebound after Sandy
While the disruptive after-effects of Sandy lasted quite some time in these hard-hit areas, Nassau County and Long Island as a whole bounced back fairly quickly—at least in terms of economic activity as measured by employment. As of December 2012, employment in Nassau County had rebounded by 6,300, more than reversing November’s 5,900-job loss. And in Suffolk County, November’s 1,500-job loss was followed by a robust gain of 4,700 in December, putting employment there at a five-year high. Over the first eight months of 2013, job growth in Long Island has been even stronger than it was before the storm, averaging a better than 3 percent annual rate (though all 2013 data are preliminary and don’t break out Nassau and Suffolk counties individually). In fact, since January, employment on the Island has been at record highs, and as of August there were 23,000 more jobs than there were back in early 2008—right before the recession.

So it would certainly seem that Long Island’s economy didn’t get derailed by Sandy. But did Sandy—or, more aptly, the recovery and rebuilding after the storm—actually boost economic and job growth? A quick look at which industry sectors in hard-hit Nassau County saw the quickest rebound and the strongest growth suggests that may indeed be the case. Overall employment registered a “v-shaped” rebound in December, and this was also the case for leisure and hospitality (restaurants, hotels, etc.). But that wasn’t the pattern for most individual industries: For the most part, sectors that saw the steepest November losses tended not to see much of a rebound in December, whereas industries that showed resilience in November largely registered sizable job gains in December. Construction employment, for instance, was little changed right after Sandy, and subsequently surged in December and continued to grow strongly into 2013. As of August, employment of specialty trade contractors (such as carpenters, electricians, and masons) on Long Island was up more than 14 percent from a year earlier. Another industry seeing robust job growth since Sandy has been administrative, waste, and remedial services. In contrast, manufacturing employment, which had been growing prior to Sandy, fell noticeably after the storm and hasn’t rebounded.

In fact, one concern is that employment remains depressed in high-paying sectors like manufacturing, finance, and government, while much of the new job creation has been in lower-paying industries like private education and leisure and hospitality. Yet there have been sturdy job gains in the well-paying professional, scientific, and technical services sector, as well as in industries like health care, transportation, and warehousing, where wages are about average.

Looking at indicators other than employment, one sees a more mixed picture. On the strong side, Long Island’s commercial real estate market—most notably, its office market—has been among the strongest in the region. Vacancy rates have remained below average and asking rents have risen, albeit modestly. However, home prices haven’t rebounded to nearly the same degree as they have in New York City and other parts of the region. And this was true both before and after Sandy. As of mid-2013, home prices in both Nassau and Suffolk counties were still down just over 20 percent from their 2006 peak levels. Suffolk has seen something of a rebound since the storm, but Nassau’s market has remained flat.


Rachel Keller is a former research analyst in the Group.
Posted by Blog Author at 07:00:00 AM in Regional Analysis, Sandy