The Bank of Japan decided at its April meeting that it was introducing an aggressive asset purchase program to “drastically change the expectations of markets” concerning inflation and output after fifteen years of deflation. To have the desired effect, the Bank believed the program’s scale would have to be unprecedented—and it was. In particular, the Bank said it would double the monetary base from ¥135 trillion ($1.35 trillion using an exchange rate of 100 yen per U.S. dollar) to ¥270 trillion by the end of 2014. Commentary at the time shows that markets were indeed surprised.

Since the announcement, the Bank’s asset purchase program has been injecting substantial amounts of liquidity into the economy. The program involves buying ¥7 trillion ($70 billion) in government bonds each month, along with smaller purchases of exchange-traded funds (¥1 trillion per year) and real estate investment trusts (¥30 billion per year). A key stated aim of these purchases is to put downward pressure on long-term interest rates and risk premia, thereby pushing investors into alternative assets such as equities and bank loans.

The chart below shows the monetary base has surged since April, putting the Bank of Japan well on its way to doubling it by the end of 2014. (The jump in early 2011 reflects liquidity injections in the aftermath of the Tōhoku earthquake.) It should be noted that the program is open-ended, with the Bank stating that it will continue buying assets as long as necessary to achieve its 2 percent inflation target. 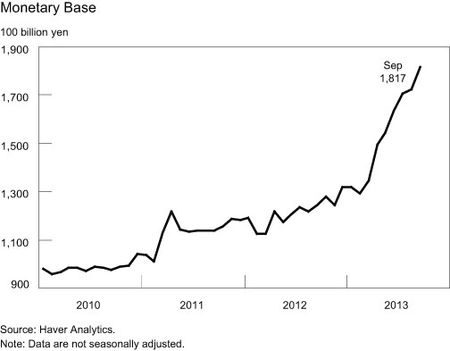 Market commentary suggested that much of the liquidity injected into Japan’s economy might find its way abroad as Japanese investors searched for higher yields. Bank of Japan board members anticipated this possibility, with comments in the April meeting minutes noting that lower yields in Japan might prompt flows into foreign currency bonds. Some analysts went further, suggesting that some markets, particularly in the Emerging World, might have trouble absorbing the funds likely to flow out of Japan, potentially leading to excessive credit growth and asset price bubbles.

A review of simple balance-of-payments accounting identities points to limits in how much a shift in monetary policy can affect cross-border financial flows. To start with, a country such as Japan, where domestic saving exceeds investment spending, lends its surplus saving to the rest of the world. For another country where saving is less than investment spending, the saving shortfall must be made up for by borrowing from abroad. The scale of this borrowing or lending is the current account balance, a broad measure of the trade balance. After all, a country where imports run ahead of exports is also spending more than it produces and must borrow from abroad to make up the difference.

In Japan, net private and official financial outflows have narrowed in recent years along with the current account surplus, which is depicted in the chart below. Both have gone from almost 4 percent of GDP in 2010 to just over 1 percent in the first half of 2013, for an average of roughly ¥500 billion ($5 billion) in net cross-border outflows per month. 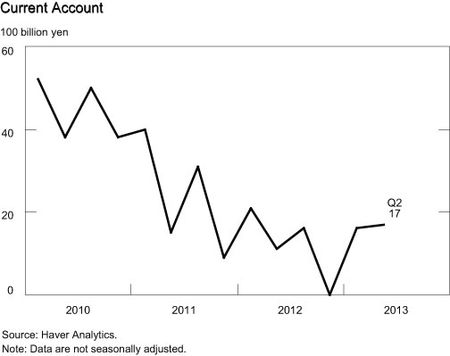 This balance of payments accounting means the asset purchase program could not produce a sudden wall of money flowing out of Japan unless it causes exports to jump substantially above imports or elicits a sudden wall of money flowing into Japan. The next chart shows that recorded financial outflows from Japan have consistently exceeded inflows, with the difference equal to the current account balance (again, plus net data errors and the capital account). There was a substantial unwinding in Q1 2013, with cross-border sales of both Japanese investments abroad and foreign investments in Japan. Cross-border sales continued in the second quarter with the April start of the asset purchase program. (Data errors explain why measured net outflows were negative in recent quarters when the current account surplus would have them be positive.) The Bank’s asset purchase program set off no wall-of-money outflow from Japan. Instead, funds were brought back into the country. 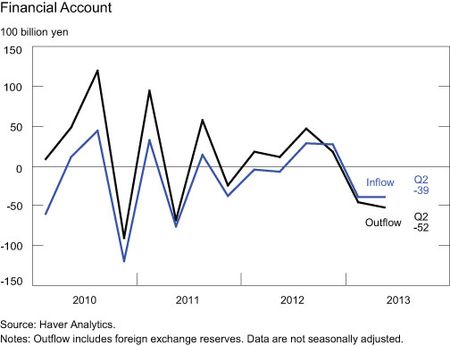 The international impact of the April announcement fell largely on exchange rates rather than volume of financial flows. In particular, the yen fell after the unexpectedly dramatic loosening in monetary policy, as theory would suggest, from ¥93 per U.S. dollar before the April announcement to near ¥100 per U.S. dollar. But this swift repricing in currency markets did not require any meaningful change in net cross-border flows.

Thomas Klitgaard
is a vice president in the Research and Statistics Group of the Federal Reserve Bank of New York.

“there can be no wall of money flowing out of Japan without a wall of money flowing into Japan.” The idea is that the current account and the financial account have to balance, so without a larger c/a surplus (= money coming into Japan) there can’t be a larger f/a deficit (= money flowing out of Japan). But there are actually three major accounts: the current account, the financial account, and MOVEMENT ON RESERVES. The fact that central banks sometimes have to enter the market to balance supply and demand for a currency shows that the c/a and f/a don’t always balance naturally, or at least not at prevailing FX rates. For example China — admittedly an odd example with its capital account restrictions — has a surplus on both the c/a and f/a, which is why the PBOC has to intervene so much (or perhaps it has this dual surplus because the PBOC intervenes so much). In the case of Japan, the institutions selling JGBs, REITs etc. to the BoJ suddenly find themselves with excess reserves and a diminished portfolio of interest-bearing assets. They could decide to reinvest those reserves in foreign assets above and beyond the current account surplus, no? The excess supply of yen/demand for dollars would either be made up by the BoJ absorbing the flow through intervention or by the yen depreciating until f/a outflows do equal the c/a inflows. I would argue that encouraging such outflows is one of the unstated purposes of Japan’s QQE.