« At the N.Y. Fed: Managing the Risk of Catastrophes—Protecting Critical Infrastructure in Urban Areas | Main | Has the Fed Stabilized the Price Level? »

The chart below shows the dynamics of U.S. asset prices in five-minute intervals (the ten-year Treasury rate, S&P 500, and euro/dollar exchange rate) during the announcement day. The strong market reaction was spurred not only by the release of the Federal Open Market Committee (FOMC) statement at 2 p.m., but also by the question-and-answer part of the press conference at 2:30 p.m., when journalists questioned the Chairman to better understand the Fed’s views. In this case, markets thought Chairman Bernanke revealed new, important information, and asset prices moved. But was this an exception? Do all press conferences provide new information, or is the FOMC statement the more market-moving Fed communication tool? 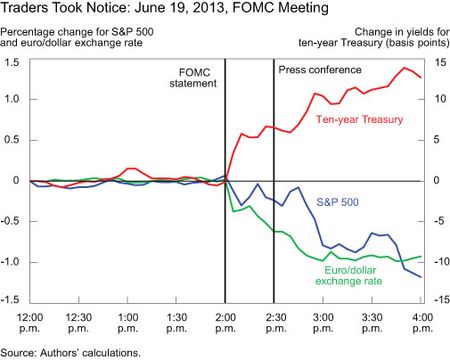 To answer this question, we exploit the timing in the release of information. We restrict our attention to 2012, when the FOMC met eight times to discuss monetary policy. At the end of each meeting for which there was a press conference (on January 25, April 25, June20, September 13, and December 12), the FOMC released a statement at 12:30 p.m. providing an overview of its policy stance. Then, at 2 p.m., the FOMC released the “Summary of Economic Projections” (SEP), which provides individual Committee members’ forecasts for output growth, the unemployment rate, inflation, and the federal funds rate. Finally, at 2:15 p.m., the Chairman started the press conference, which usually concluded around 3:15 p.m. Press conferences were only held in conjunction with five of the eight yearly FOMC meetings. In 2013, the timing changed a bit and the SEP started to be released concurrently with the FOMC statement at 2 p.m.; to avoid confounding the effect of the FOMC statement with that of the SEP, our post only looks at 2012.

The next chart displays the five-minute volatility of the S&P 500. The blue line shows the average volatility on 2012 FOMC meeting days that featured a press conference, while the black line shows the average volatility on nonannouncement days. We can clearly see that stocks are much more volatile on FOMC meeting days, and that the high volatility is concentrated around 12:30 p.m., 2 p.m., and the 2:15-2:30 p.m. period, when announcements are made. The effect is also quite large: If stocks on a daily basis were as volatile as they were at 12:30 p.m. on an announcement day, then the annualized volatility would be 35 percent instead of the normal 8 percent (note that these are five minute volatilities that were then annualized, not annual volatilities). A red circle appears on top of the blue line whenever the difference in volatility between announcement and nonannouncement days is unlikely to be due to chance. (For our beloved wonks: The red dot means that the difference is statistically significant at the 10 percent level.) 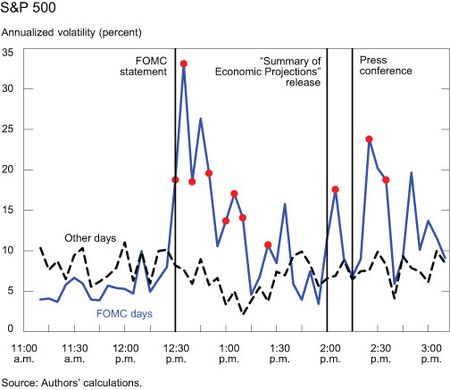 We’re now ready to answer the original question. By looking at the chart, it’s apparent that the June FOMC meeting wasn’t an exception, but rather the rule. The stock market moves the most around the release of the FOMC statement, but also moves more than usual around the time of the press conference. Because we’re looking at very narrow windows of time in which no other relevant economic events or announcements took place, we’re confident that we can ascribe the extra volatility to FOMC-related activities.

The “announcement effect” we uncovered isn’t unique to equities. The next two charts show the reaction of government bonds and exchange rates. The average five-minute change in the ten-year Treasury yield is two basis points after announcements – eight times higher than at the same time on nonannouncement days. For the euro/dollar exchange rate, we see a similar pattern. A notable finding is that, unlike equities, bonds tend to react more to the SEP release than to the press conference. 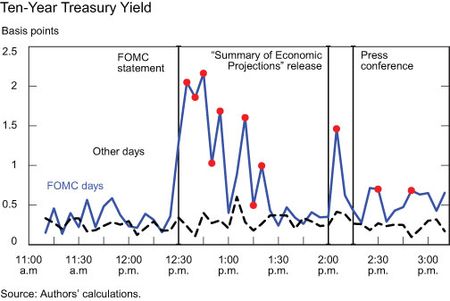 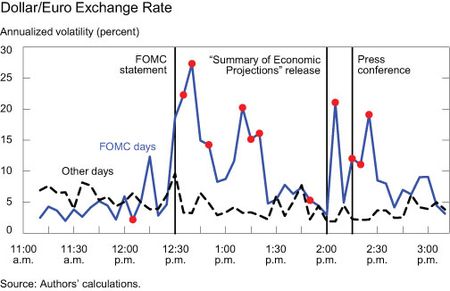 One of us has also found that these effects are also present in Europe, supporting the idea that there are several important communication tools at the disposal of central bankers throughout the world. This is particularly relevant in today’s environment of unconventional monetary policy, in which there are multiple dimensions of decision making that need to be conveyed to the public.

Fernando M. Duarte
is an economist in the Federal Reserve Bank of New York’s Research and Statistics Group.

Carlo Rosa is an economist in the Markets Group.

By this one might say that it is a crucial necessity for Fed to reconsider its communication tools. I guess the volatility in the bonds market is the last thing the Fed wishes for. I just remember how the bond market refrained Fed from tapering following the Fed announcement in May signaling a taper. It’s becoming clear that in today’s world, not only central banks have communication tools, but investment banks do so, and they actually know how to do it when it comes to “communicate with central banks”.