« The Fragility of an MMF-Intermediated Financial System | Main | Are Economic Values Transmitted from Parents to Children? »

Fairfield County, comprising the southwestern corner of Connecticut, is sometimes thought of as an affluent “bedroom community” outside New York City—a place filled with commuters taking home large paychecks. On average, it’s indeed one of the most affluent counties in the United States, with a median household income of $80,000. Yet a fairly small minority of working residents—fewer than one in ten—actually commutes to the Big Apple. Fairfield County has a sizable industry base of its own. In particular, the finance industry, based largely in Stamford and Greenwich, accounts for a disproportionately large 9 percent of the county’s employment and generates 27 percent of aggregate income. These proportions aren’t only well above the respective nationwide averages, but are even slightly higher than they are for New York City. Fairfield is also a major hub for corporate headquarters: The proportion of jobs in management of companies is more than twice the nationwide average and, again, higher than it is for New York City. Manufacturing (largely aircraft) is also somewhat prevalent, though not nearly to the same extent it was a couple of decades ago: It’s fallen by more than half since 1990. An economic and demographic profile of Fairfield County can be found on our District Profile page.

A Tale of Two Cities
While Fairfield County’s average income is among the highest in the nation, so is the degree of income inequality in the county. To illustrate this, let’s consider the two largest cities: Stamford and Bridgeport. Stamford’s median household income, at $76,000, is again half as high as the nation’s. Similarly, its poverty rate is well below the nation’s, and a whopping 43 percent of adults hold college degrees. In contrast, Bridgeport’s median income is $38,000 (half of Stamford’s) and its poverty rate is double that of Stamford’s. Just 15 percent of adult residents hold college degrees—barely more than half the U.S. average and just over a third of Stamford’s rate. Quality-of-life measures show similar differences: The overall crime rate in Bridgeport is roughly three times as high as in Stamford, and its violent crime rate is roughly quadruple Stamford’s.

As much as these two cities may seem like polar opposites, Stamford is by no means the county’s most affluent community. The smaller towns of Greenwich, Darien, and New Canaan, for instance, have median household incomes in excess of $100,000. At the other end of the spectrum, Bridgeport does stand out as the least affluent by far. Nevertheless, even during the depths of this last recession, there has been positive news in Bridgeport, including retail and residential development downtown; and just very recently, plans were announced to convert a former landfill into a green energy park.

Because of their geographic proximity, Bridgeport and Stamford are generally lumped together as one unified economic area. An upside is that these two cities, though quite dissimilar, are closely linked economically: The commute between them on the Metro North railroad is fairly short, so that residents of Bridgeport can pursue job opportunities in Stamford, and vice versa. This proximity also creates the potential for strong business linkages between Bridgeport-based and Stamford-based firms. One big downside, though, is that timely, reliable economic statistics for the individual cities are simply not available.

Fairfield County as a whole closely tracked the national economy during the recession. Employment fell by 7 percent during the 2008-09 downturn—a bit steeper than for the nation as a whole, as the chart below shows. Moreover, the county’s recovery has been slow, as employment has rebounded in fits and starts. By the beginning of 2012, Fairfield County had reversed about half of its 36,000 net job loss. But for the rest of the year, job growth stalled, largely because the county’s key finance sector saw renewed job losses. Job losses in construction, professional and business services, and manufacturing also pulled down overall employment. And then came Sandy. The storm didn’t cause as much damage in Fairfield County as it did in places like Staten Island, Nassau County, and much of the Jersey Shore. Still, cities and towns like Bridgeport, Stamford, Milford, and Fairfield were severely affected. While many of the hardest-hit communities have been slow to recover, Sandy’s disruptive effect on the county’s overall economy appears to have been short-lived. Employment did decline last November and December (right after Sandy), but at no faster a rate than in the months leading up to it. 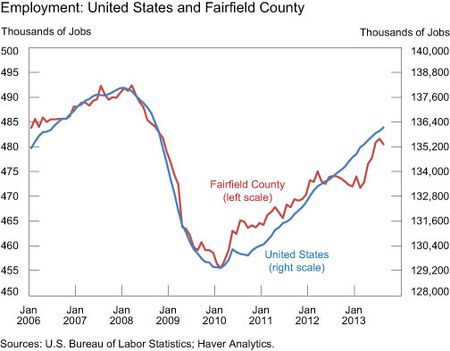 Employment has been growing roughly in line with the nation thus far in 2013—in stark contrast with 2012. Since February, the area has seen a strong and fairly broad-based rebound in employment—from a one-year low to a nearly five-year high in July—though it has edged back in recent months. Some of this rebound may also reflect rebuilding related to Sandy. The county has recouped more than half of the 36,000 jobs lost during the last downturn. Some sectors, such as education, health, and professional and business services, were adding jobs; but these were offset by job losses not only in finance, but also in the goods-producing and -distributing sectors.

The housing recovery, however, hasn’t been nearly as robust. Between 2006 and early 2012, home prices in Fairfield County fell by slightly more than 25 percent on average—not quite as steep as the 30 percent nationwide drop. Since then, however, while home prices nationwide have rebounded by roughly 15 percent, they’ve risen by less than half that in Fairfield County.

Fairfield County is well positioned for growth going forward. It has a highly educated workforce: Nearly 45 percent of adults hold a college degree, well above the nationwide average. The county also has a diverse industry mix, with a relatively high concentration of jobs in growing and well-paying industry sectors. Although the area’s key finance sector has shed jobs over the past two years, it remains an important and valuable component of the local economy. Finally, while not all that many residents commute to New York City, there are strong advantages to being adjacent to a thriving metropolis.