« Crisis Chronicles: The Mississippi Bubble of 1720 and the European Debt Crisis | Main | Why Do Banks Feel Discount Window Stigma? »

One of the main missions of central banks is to act as a lender of last resort to the banking system. In the United States, the Federal Reserve has relied on the discount window (DW) for nearly a century to fulfill this task. Historically, however, the DW has been little used even when banks may have faced acute liquidity shortages, a phenomenon commonly attributed to stigma. In this post, we show that during the last financial crisis banks were willing to pay large premia to avoid borrowing from the DW, suggesting that DW stigma is an economically important phenomenon.

DW stigma is generally defined as banks’ reluctance to approach the DW out of concerns that, if detected, depositors, creditors, or analysts could interpret DW borrowing as a sign of financial weakness. It is believed that such inferences could have severe consequences for DW borrowers such as a run on deposits, a loss of confidence by market analysts, a drop in the institution’s stock price, or a withdrawal of market sources of liquidity. The economic consequences of DW stigma may be particularly severe during financial crises, preventing the Fed from effectively disseminating liquidity when it is most needed. In addition, a bank that delays accessing the DW may resort instead to costly alternatives (such as fire sales of assets), which may further weaken the bank and add to financial system instability. Finally, a reluctance to borrow at the DW could lead banks to excessively self-insure against tail risks, thereby reducing the loans it extends to other financial firms and to the real economy.


In a previous post, we looked at DW stigma with respect to the Term Auction Facility (TAF), a temporary facility introduced in December 2007 by the Fed as an alternative to the DW. The TAF was specifically designed as an auction to remove perceptions of stigma that had plagued the DW. We found that between December 2007 and October 2008 banks were willing to pay a substantial premium—in excess of 44 basis points on average—to borrow from the TAF instead of the DW. However, because the TAF was operated under similar conditions to the DW, we cannot exclude the possibility that, despite the Fed’s effort, the TAF was also stigmatized. In other words, it is possible that banks preferred not to borrow from the Fed at the TAF out of concern about being perceived as financially weak. In this case, our initial measures of the magnitude and costs of DW stigma would be underestimated. As a follow-up to our initial study, we consider an alternative measure of the magnitude of DW stigma by calculating the premia banks were willing to pay in short-term funding markets to avoid borrowing at the DW.


The main challenge when juxtaposing DW and market borrowing is to identify markets that offer funding with comparable terms. Perfect substitutes do not exist, since the lenders (the Fed in the case of the DW and private institutions in the case of the financial markets) have different objectives. Nevertheless, we argue in our paper that two markets, the tri-party repo (“repo”) and asset-backed commercial paper (ABCP) markets, offered reasonable substitutes to the DW with respect to the borrower’s eligibility, the collateral used to secure the loans, and the terms of the loans offered. We can then define the DW stigma premium with respect to these markets as the difference between their rates and the DW rate, which is equal to the Fed’s target rate plus a penalty spread.


The similarity among the three measures of DW stigma may be better appreciated in the chart below where the average DW stigma premia with respect to the TAF (blue line), the repo market (green line), and the ABCP (red line) market are plotted (with observations marked by squares, circles, and diamonds, respectively). The three measures of DW stigma premium generally followed a similar pattern: they were low between January 1, 2008, and March 16, 2008 (when the DW penalty spread over the target rate was reduced), became elevated, but relatively stable following this period until the bankruptcy of Lehman Brothers, and rose sharply in the days thereafter. There are, however, two noticeable differences between the three measures: the ABCP-based DW stigma premium was relatively high in December 2007, while the repo-based DW stigma premium was lower in the weeks before the failure of Lehman Brothers. The first difference was likely due to the sharp increase in ABCP yields during the run on the ABCP market in December 2007. The second difference may reflect the impact of the Fed’s Term Securities Lending Facility intended to reduce stresses in the repo market. 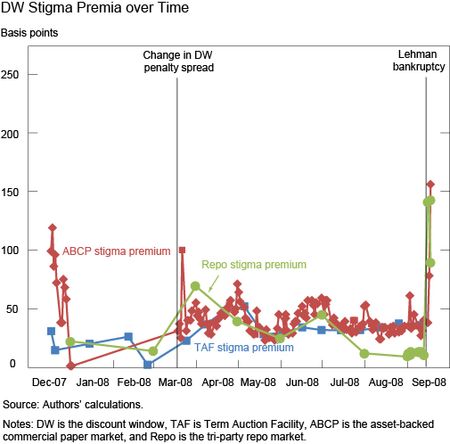 Now, are there differences with respect to the opportunity cost of DW stigma? To address this question we calculated how much more a bank actually paid in interest by borrowing at the TAF, on the ABCP market, and on the repo market instead of borrowing an equal amount at the DW. In the left panel of the next chart, we can see, on average, a bank would have saved a substantial amount (between $34 million and $62 million per quarter depending on the source of funding) by borrowing at the DW. Note also that the DW stigma opportunity cost is the largest with respect to the ABCP market reflecting the fact that ABCP issuers are mostly big banks with sizeable ABCP issuances.


In the right panel, the opportunity costs are expressed in relative terms, that is, as a percent of the amount of interest the bank would have had to pay if it had borrowed at the DW. An interesting aspect of this relative measure is that it is directly comparable across the three funding sources as it does not depend on the amount borrowed. The opportunity cost relative to interest payments is relatively large and remarkably similar across the TAF, ABCP, and repo borrowing, measuring between 11.7 percent and 14.3 percent.

In summary, our results show that banks could have lowered their interest expenses substantially during the financial crisis of 2007 and 2008 by borrowing from the DW instead of from the TAF or from the financial markets. We also find that the magnitude and opportunity cost of DW stigma was remarkably similar whether banks borrowed from the Fed, at the TAF, or from private institutions in the ABCP and repo markets. In particular, we do not identify a downward bias in our estimates of the DW stigma premium with respect to the TAF, consistent with the idea that the TAF was effectively designed to eliminate the stigma of borrowing from the Fed.

Olivier Armantier is an assistant vice president in the Research and Statistics Group of the Federal Reserve Bank of New York.