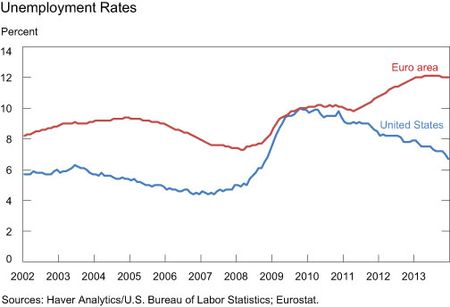 An alternative measure of the labor market, the employment-to-population ratio, tells a somewhat different story. This ratio, seen in the chart below, is calculated as the number of people employed divided by the number of people above the age of 16 (15 in the euro area). Note that, unlike the unemployment rate, the employment-to-population ratio does not reflect changes in the number of people reporting that they are searching for work. The ratios are indexed in the chart so that the average for 2010 for each series is equal to 100 to reveal the relative magnitude of recent changes in the ratio. (The U.S. ratio was 7.1 percentage points above the euro area ratio in 2010.) The chart below shows that the employment-to-population ratio deteriorated in the euro area and remained largely unchanged in the United States. This measure of the labor markets does not exhibit any of the gains suggested by the U.S. unemployment rate, with employment only growing in line with the population. 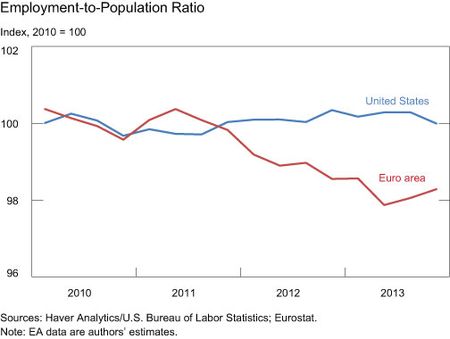 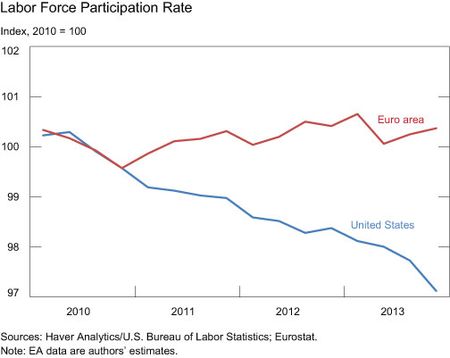 A breakdown of labor force participation by gender in the chart below illustrates the source of the divergence. Rates for men are plotted with dotted lines, and rates for women are plotted with solid lines. Euro area women are the outliers. Their labor force participation rate is about 2 percent above the 2010 level, unlike the rates for American men and women which have all declined and the rate for euro area men which has been relatively flat. 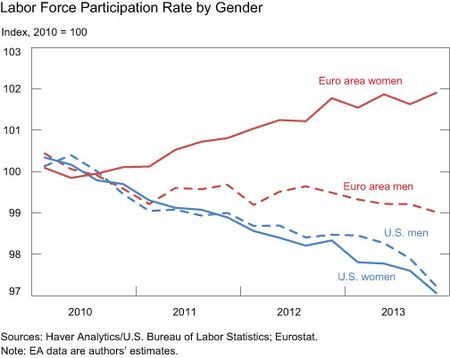 The chart below breaks down labor force participation for euro area women by age. It turns out that women over 45 accounted for almost all of the overall increase since 2010. 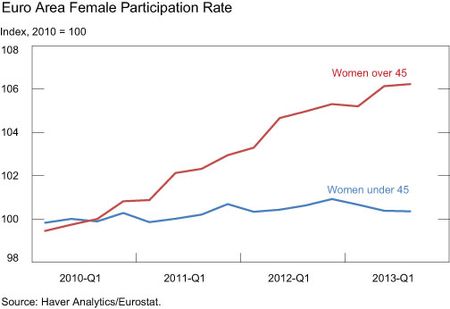 The upward trend in the share of over-45 women in the labor force is evident in the all three of the largest euro area economies. The chart below displays the labor force participation rates for younger and older women in Germany, France, and Italy (not indexed). There has been little change in labor force participation for younger women in the three countries over the past decade, while the growing participation rates for older women are similar across the three countries despite differences in labor market structures and business cycle dynamics. 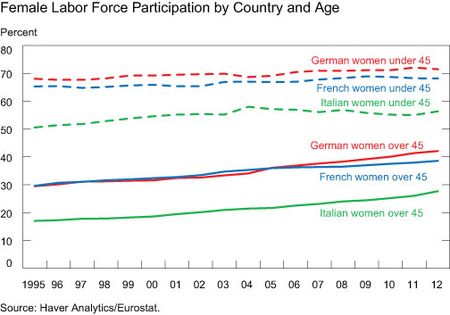 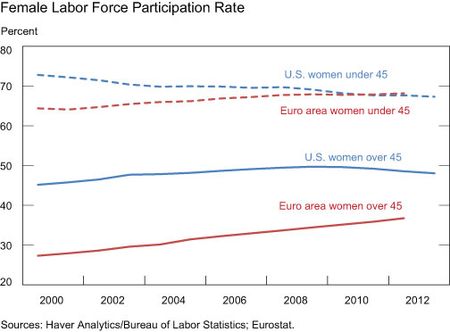 The convergence of female labor force participation rates in the United States and the euro area will make comparison of unemployment rates across the two economies tricky going forward. Just as a declining labor force has put downward pressure on the U.S. unemployment rate, increasing labor force participation will put upward pressure on the euro area rate, making the labor market look less healthy than other indicators might suggest.

Richard Peck is a senior research analyst in the Group.