« What Makes a Bank Stable? A Framework for Analysis | Main | Historical Echoes: Open a Kiddie Book and Read about Economic Principles, or Read it and Sleep »

In a previous Liberty Street Economics post, we introduced a framework for thinking about the risks banks face. In particular, we distinguished between asset return risk and funding risk that can interact and cause a bank to fail. In our framework, a bank can fail for two reasons:

In this post, we use the framework to study how several factors and policy instruments affect a bank’s risk of failure. We look at how changes in the liquidity of banks’ assets affect failure risk, we analyze what happens if the bank has more capital (or lower leverage), and we show how similar the implications are if the bank held more cash instead of risky assets and if the bank had more long-term instead of short-term debt. In addition, we provide an interactive chart where you can experiment yourself with how changing these bank characteristics affects bank solvency. 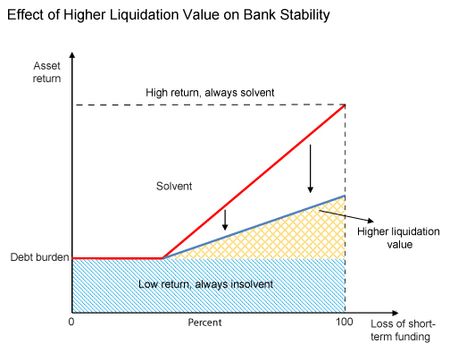 Next, we consider how lower leverage (higher capital), keeping the maturity structure of the bank’s liabilities fixed, affects insolvency risk. Lower leverage means that the assets the bank holds are funded by more equity and less debt. While equity can act as a cushion against losses, debt has to be repaid no matter what and can therefore cause a bank to fail.

In contrast to the liquidation value, we see in the next chart that the leverage ratio affects both a bank’s risk of fundamental insolvency as well as its risk of being “solvent but illiquid.” The reason is that more equity unambiguously increases the bank’s loss-absorption capacity. With less total debt to repay, the bank will survive for some low asset returns that would have caused insolvency with higher leverage. In addition, since the bank has less short-term debt, there are relatively more assets available to sell and satisfy withdrawals. Therefore, the bank is less vulnerable to illiquidity. 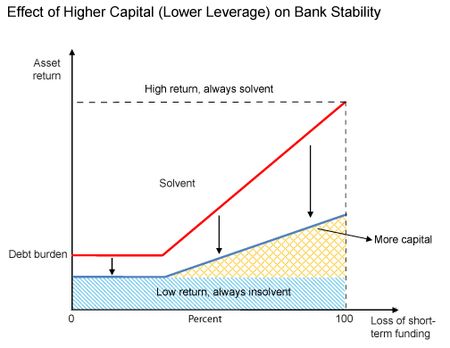 Regulation, such as through higher capital requirements or constraints on leverage ratios, would have this kind of stabilizing effect.

Finally, we turn to two related issues. As we discussed, the two factors that make banks vulnerable to runs are 1) that a large part of their debt is short term and can be withdrawn quickly and 2) that a large part of their assets is long term and can only be sold at a discount. Some direct ways to address these factors would be for a bank to finance itself with more long-term instead of short-term debt and/or hold more of its assets in cash instead of risky assets.

As it turns out, these two measures have the same effects in our framework, as illustrated in the chart below. 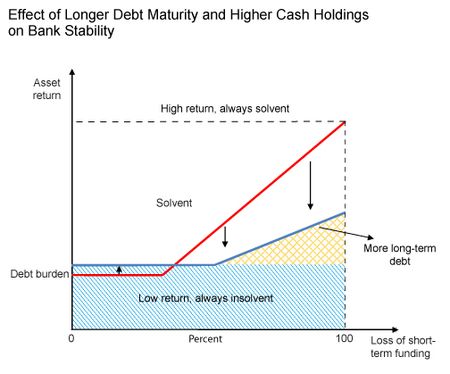 In our discussion so far, we’ve only studied the effects of changing one bank characteristic at a time. We invite you to use our interactive chart to experiment yourself with changes in one or more of the characteristics and see the effects on the four regions of bank solvency.

Tanju Yorulmazer is a research officer in the Group.

Posted by Blog Author at 07:00:00 AM in Financial Institutions, Liquidity