« Just Released: The Inflation Outlook in the Euro Zone . . . Survey Says | Main | What Makes a Bank Stable? A Framework for Analysis »

In a prior blog post, we saw how Maiden Lane evolved over time. It was here that a momentous event occurred in 1790, changing the history of the United States.

While serving as Secretary of State in 1790, Thomas Jefferson rented a “mean house” at 57 Maiden Lane "for 106 pounds per year" and “not approving much of the stiff style and etiquette of New York he gave up all his time to the establishment of his new department, foreign affairs, and home." There was much to occupy Jefferson’s time while he was in residence here—in particular, the debt crisis of 1790.

One June evening, Jefferson held a dinner party at his Maiden Lane house. But this was no ordinary dinner. Among the guests were Treasury Secretary Alexander Hamilton and James Madison, who were on opposite sides of a hot political issue.

In his "Report on the Public Credit, January 9, 1790," Hamilton proposed refinancing loans owed to foreign creditors, funding the national debt with the issuance of new federal bonds, assumption of state debts incurred from the Revolutionary War, and an excise tax to pay for the assumption. Hamilton felt that his plan would help to establish America's credit both domestically and abroad. The combined foreign and domestic debts made up just over $54 million.

Both the debt funding plan and the debt assumption plan met with opposition. Hamilton’s argument for funding the national debt won him the votes he needed; however, he faced a much tougher battle over the assumption plan. The opposition stemmed from the fact that some states owed more than others: Delaware owed $50,000 while South Carolina owed $5 million, with the total of all state debt equal to $25 million. Some states, in particular the southern ones, felt that they would be subsidizing the other states under Hamilton’s plan. Madison, a Virginian, strongly opposed Hamilton’s plan and blocked the motion each time it came up for a vote in Congress.

While talks had been ongoing for months, the final compromise was supposedly hashed out at this dinner party. Philadelphia would replace New York as the country’s capital for a period of ten years. This gave Hamilton a chance to win over Pennsylvania’s vote, but he had to defend his action to New York’s representative. To appease the southern states, a new town between Virginia and Maryland would eventually become the permanent U.S. capital. In exchange for moving the capital south, Madison would get Hamilton the votes he needed for his debt assumption proposal. The dinner party compromise led to both the Residence Act of 1790 and the Funding Act of 1790.

The residence at 57 Maiden Lane no longer exists. A plaque marks the spot where the house once stood, with no hint of the drama that unfolded there on June 20, 1790. 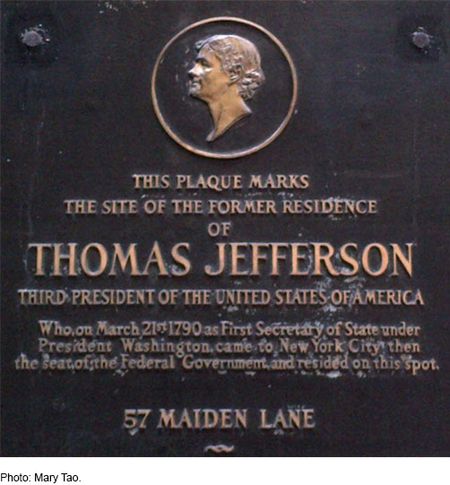 The USA's first "bailout" was harder to negotiate than the last one.