The European Central Bank (ECB) released its 2014:Q1 Survey of Professional Forecasters (SPF) on February 13. The release comes at a time of growing concern about low Euro-zone inflation: consumer prices were up only 0.7 percent over the year in January, the fourth consecutive monthly reading of less than 1 percent and well below the ECB’s target of just below 2 percent. Some commentators have argued that falling inflation after five years of recession or very slow growth has raised the threat of deflation. 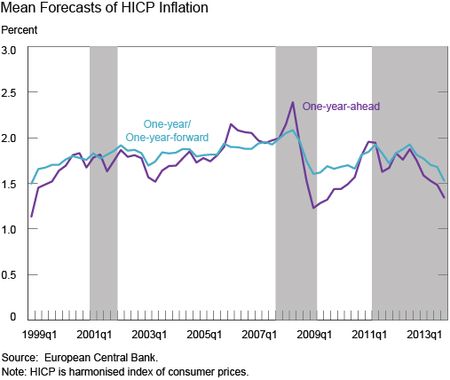 In addition to point forecasts, the ECB-SPF reports density (histogram) forecasts in which respondents assign probabilities to a range of possible inflation outcomes using a given set of intervals (bins). The density forecasts provide important information that can be used to measure inflation uncertainty and deflation risk. Measures of inflation uncertainty remain elevated, indicating that survey participants do not attach a high degree of confidence to their forecasts. This heightened uncertainty may also be acting to restrain output growth. However, an examination of low tail risks indicates that survey participants are not worried about deflation. The low tail risks are based on the distribution of probabilities that individuals assign to deflation outcomes corresponding to the 50th, 75th, and 90th percentiles. While there was an increase in the probabilities of those respondents most concerned about deflation, the change was slight compared to the previous survey and the probabilities remain below values observed toward the end of the previous recession. Further, over half the respondents assigned no probability to deflation over either forecast horizon, similar to their recent responses and explaining why the line associated with the 50th percentile isn’t visible.

Taken together, an initial reading of the data would suggest that respondents view the slowing in inflation as transitory rather than as a harbinger of a deflationary spiral. This view, however, does not rule out the possibility of a negative inflation reading in the euro area for a quarter or so. Finally, the general absence of deflation worries in the survey data may reflect the respondents’ belief that the ECB will soon provide greater monetary accommodation.

Joseph Tracy is an executive vice president and senior advisor to the Bank president at the Federal Reserve Bank of New York.
Posted by Blog Author at 07:00:00 AM in Euro Area, Forecasting, Inflation, International Economics, Macroecon