Why Is the Job-Finding Rate Still Low? -Liberty Street Economics

Why Is the Job-Finding Rate Still Low?

Fluctuations in unemployment are mostly driven by fluctuations in the job-finding prospects of unemployed workers—except at the onset of recessions, according to various research papers (see, for example, Shimer [2005, 2012] and Elsby, Hobijn, and Sahin [2010]). With job losses back to their pre-recession levels, the job-finding rate is arguably one of the most important indicators to watch. This rate—defined as the fraction of unemployed workers in a given month who find jobs in the consecutive month—provides a good measure of how easy it is to find jobs in the economy. The chart below presents the job-finding rate starting from 1990. Clearly, the job-finding rate is still substantially below its pre-recession levels, suggesting that it is still difficult for the unemployed to find work. In this post, we explore the underlying reasons behind the low job-finding rate. 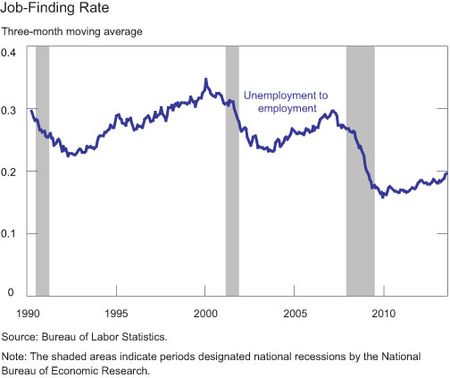 According to the search and matching theory developed by Diamond, Mortensen, and Pissarides (see, for example, Pissarides [2000], Mortensen and Pissarides [1994], and Diamond [1982]), it is costly for workers and firms to form suitable matches because of the uncoordinated nature of the labor market. Workers must devote considerable time to sending out resumes, contacting job agencies, and interviewing for jobs, and firms must consume resources posting vacancies and recruiting candidates with suitable skills and talents. The process that matches workers to firms is typically summarized by a matching function, which determines the number of jobs formed given the number of vacancies and unemployed workers. According to the matching function, the main determinants of the job-finding rate are the ratio of job openings to the number of unemployed, (v/u), elasticity, α, and the matching efficiency, x: 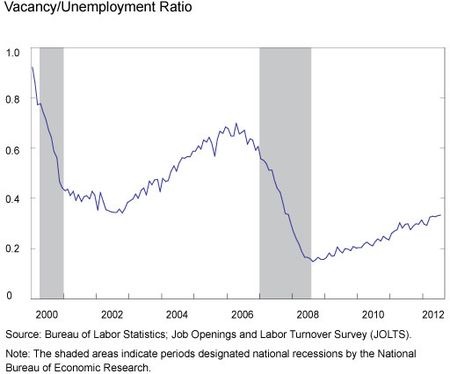 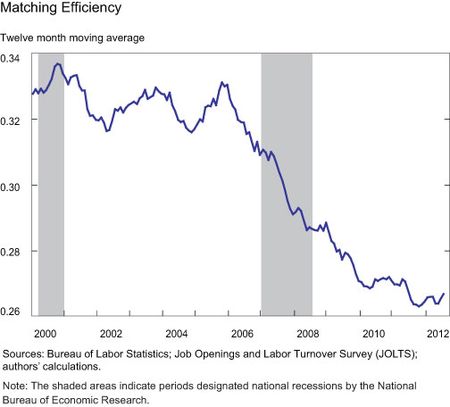 The vacancy-unemployment ratio summarizes demand and supply conditions in the labor market. When there are many job openings per unemployed individual, it is naturally easier to find jobs; conversely, it becomes harder to find jobs when there are many unemployed individuals competing for a small number of job openings. The parameter matching efficiency captures various factors that affect the efficiency of the matching process. An increase in skill or geographic mismatch, a decline in search effort of workers, or a decline in recruiting effort of employers would all lower the matching efficiency in the labor market. The elasticity, α, captures the responsiveness of the job-finding rate to the availability of jobs. 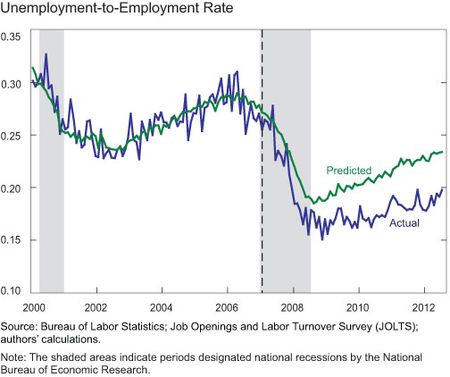 However, one can also see that even the predicted job-finding rate still sits at 23.4 percent, significantly below its 2007 average of 27.8 percent. This implies that even if matching efficiency had returned to its pre-recession level and the economy had moved to the predicted line, the job-finding rate would still be significantly below its pre-recession levels. Our calculations suggest that while the efficiency of the U.S. labor market has not yet recovered, the most important factor is still the low vacancy-to-unemployment ratio. 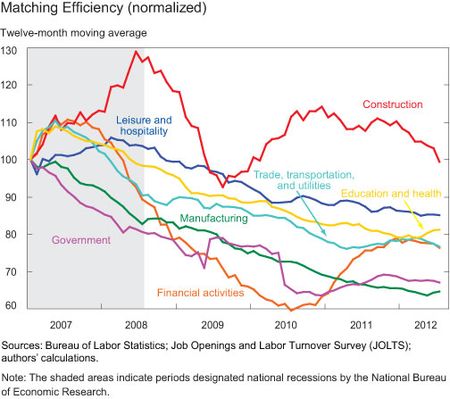 We conclude that while matching efficiency has declined and remained low in virtually all industries, the most important factor in the low job-finding rate is the persistently low level of vacancies per unemployed.

Victoria Gregory is a senior research analyst in the Federal Reserve Bank of New York’s Research and Statistics Group.

Christina Patterson is a former senior research analyst in the Research and Statistics Group.

Ayşegül Şahin is an assistant vice president in the Research and Statistics Group.

Giorgio Topa is a vice president in the Research and Statistics Group.
Posted by Blog Author at 07:00:00 AM in Labor Economics, Macroecon

Good report on the basics.

What is necessary next is an analysis of the structural matchmaking issues. That is, how is match-making done? Is it working, or is it failing? How does this contribute to the problem?

To talk about vacancies and number of unemployed and matchmaking – without discussing how the matchmaking is done – is just an academic exercise. It’s like discussing how people are starving and there’s a food shortage without mentioning agriculture and food production and distribution.

I suggest the authors take a look at the success rates of the dominant "matching tools" being used by employers today. Hint: They don't work well at all, yet employers rely on them. Cf., "Unemployment — Made in America by Employers," PBS NewsHour.org, http://www.pbs.org/newshour/making-sense/ask-the-headhunter-unemploymentmade-in-america-by-employers/