Has Automated Trading Promoted Efficiency in the FX Spot Market?

The FX spot market is often considered one of the deepest and most liquid markets in the world; the Bank for International Settlements (BIS) estimates global average daily volume of $2.0 trillion in April 2013. Activity is dominated by trading in the three major currencies—the U.S. dollar (USD), the euro (EUR), and the Japanese yen (JPY). While there’s a broad diversity of players in the FX spot market—including corporations, official institutions, and pension funds—the latest data show that activity is most concentrated among the large FX dealers and other financial institutions. Indeed, dealers are often the conduit through which nondealers access the market, for example, via prime brokerage relationships. The FX spot market is an over-the-counter market and differs importantly from other liquid markets like equities or futures, which are exchange traded and therefore feature a centralized counterparty. FX spot trades, in contrast, are bilateral transactions that rely on credit arrangements between the two parties involved, which means that each participant only sees, and can act on, quotes posted by counterparties with whom a bilateral credit arrangement is in place. Accordingly, there’s no concept of a universal best bid and offer price, as is the case with U.S. equity markets.

One of the key developments in FX spot trading over the past decade has been the increasing incidence of algorithmic and high-frequency trading, facilitated in part by improvements in the technological infrastructure. High-frequency trading, principally market-making and arbitrage strategies, represents a subset of algorithmic trading that features trading and order submission strategies that involve extremely high rates of order submissions, modifications, and cancelations carried out using autonomous computer algorithms that react to incoming market signals within milliseconds. While the impact of these types of strategies on the equities and futures markets has received a lot of attention, especially after the “flash crash,” the impact of these strategies on the FX spot market, which has a far different structure, has received less attention (one of the few academic studies can be found here).

Due to the challenges defining and identifying algorithmic and high-frequency trades versus other types of transactions, it’s difficult to quantify the precise share of FX spot trading activity. That said, activity has grown from nearly nonexistent in the early 2000s to significant. A BIS report on high-frequency trading in FX from 2011 estimates the share of FX global spot activity that was automated to be roughly 25 percent (compared with common estimates of up to 70 percent in equities); other sources estimate higher shares, particularly for FX spot trading in the major currencies. While much of the attention on algorithmic and high-frequency trading after the flash crash has focused on liquidity issues, another important aspect is the role of this type of trading in the rapid impounding of new information in market prices. Perhaps the clearest instance of this occurs when prices of related assets become misaligned so that arbitrage opportunities arise. In the FX spot market, this is known as triangular arbitrage.

For illustrative purposes, consider the quotes above, observed in 2007, which indicate the price at which the numerator currency can be bought (at the ask) or sold (at the bid) in terms of the denominator currency. Using these quotes, we could carry out the following round-trip transaction below, netting an arbitrage profit of €120.65 per $1 million invested, or 0.012 percent (in the absence of other transaction costs):

While this profit may seem small, in efficient markets such arbitrage opportunities ought to be short-lived and few and far between. In the FX spot market, the impediments to enforcing no arbitrage are greater than they are for exchange-traded products since the would-be arbitrageur would need to have a credit arrangement in place (possibly indirectly through a dealer) with all three market participants that posted relevant quotes (that is, the EUR/USD bid, USD/JPY bid, and EUR/JPY ask).

The chart below shows a (smoothed) estimate of how often FX spot quotes for the currency pairs EUR/USD, USD/JPY, and EUR/JPY were associated with arbitrage opportunities during the January 2001-August 2013 period. The blue dots represent the incidence of arbitrage involving buying USD and selling EUR while the red dots indicate arbitrage involving selling USD and buying EUR. 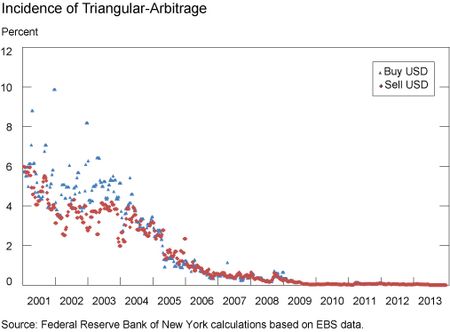 The estimate is constructed by examining the prevailing best bid and ask quotes at the end of each second during the active part of each trading day. In the early 2000s, more than one in twenty seconds on average exhibited arbitrage opportunities (here defined as a mispricing exceeding 0.25 basis points), and this fraction remained fairly constant through 2004. Starting in 2004, the fraction gradually dropped, and has hovered near zero since 2008. This pattern is consistent with the timing of the emergence of HFT and algorithmic trading enabled by application programming interfaces provided by electronic trading platforms to facilitate automated trading. Interestingly, the financial crisis in 2008-09 had relatively less impact on the efficiency of FX markets relative to other markets such as fixed-income and structured finance, which saw significant dislocations and seeming violations of no arbitrage amid funding and liquidity problems. While there may be other factors at play and no causal relationship can be proven, these data are certainly consistent with a view that the rise in algorithmic and high-frequency trading enhanced market efficiency as measured by the availability and persistence of pricing arbitrage opportunities available in the FX
spot market.

Ernst Schaumburg is a research officer in the Federal Reserve Bank of New York’s Research and Statistics Group.

The core about triangular arbitrage is : delocalization and fragmentation of pools most of which are NOT dollar based. I think you are measuring triangular arbitrage with the US Dollar in mind. So and just in that case, yes its profitability is decreasing BUT If you used Yuan as base currency you would see the triangular arbitrage efficiency increase instead. Also as you describe triang. arb. it seems that the typical deal is closed when a small profit is reached on the hedging structure. Wrong. That is what losers algos do. Winners algos don’t operate that way.