How Unconventional Are Large-Scale Asset Purchases?

The large-scale asset purchases (LSAPs) undertaken by the Fed starting in late November 2008 are widely considered to be a form of “unconventional” monetary policy. Although these interventions are certainly unprecedented, this post shows that their effect on financial conditions is not that unconventional, in the sense that the relative effects of the LSAPs on returns across broad asset classes—nominal and real government bonds, stocks, and foreign exchange—are quite similar to those of more conventional policies, such as a reduction in the federal funds rate (FFR).

The conventional instrument of monetary policy is the short-term interest rate. Ordinarily, when a central bank wants to stimulate the economy, it lowers the short-term interest rate that it controls. A lower short-term interest rate tends to generate a chain reaction in financial markets, leading to lower interest rates across maturities and types of borrowers, as well as higher stock prices and a depreciation of the domestic currency. The Federal Reserve has not been able to pursue this conventional approach to monetary policy since December 16, 2008, when it lowered the FFR to essentially zero in the midst of the most severe recession since the Great Depression. With its primary policy tool fully utilized, the Fed has pursued a series of alternative, unconventional policies—an approach explained, for instance, in a 2012 speech by Federal Reserve Chairman Ben Bernanke.

One of these unconventional policies is the purchase of assets (mostly Treasury securities and agency debt and mortgage-backed securities) through large-scale open market operations. These large-scale asset purchases have been undertaken in three waves, commonly referred to as quantitative easing 1, or QE1 (announced in late November 2008), QE2 (announced in November 2010), and QE3 (announced in September 2012). The aim of these purchases is to put “downward pressure on longer-term interest rates . . . and help to make broader financial conditions more accommodative,” as explained in the October 30 statement of the Federal Open Market Committee (FOMC). In this respect, LSAPs have very similar objectives to conventional monetary policy: they are designed to trigger the same chain reaction across assets described above. The question we explore in this post is whether the financial chain reaction triggered by LSAPs has in fact been quantitatively comparable to the one that usually follows a reduction in the FFR.

The chart below provides a sense of the answer, which is further articulated in the rest of the post. 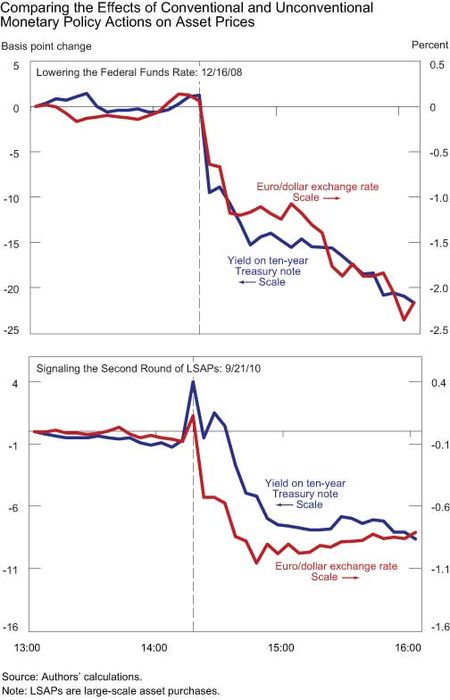 The two panels show the evolution of the euro/dollar exchange rate (in red) and of the yield on the ten-year Treasury note (in blue) around one conventional and one unconventional monetary policy intervention. The conventional intervention, on December 16, 2008 (top panel), was a 75 basis point cut in the FFR. The unconventional intervention, on September 21, 2010 (bottom panel), was the introduction of language in that day’s FOMC statement that foreshadowed the second round of large-scale asset purchases undertaken later that year. Immediately following the release of the FOMC announcement at 2:15 p.m. (marked by the vertical line in the chart), the yield on the ten-year Treasury falls, and the dollar depreciates against the euro. Moreover, the relative reaction of the two assets to the two policy interventions is very similar. For every ten-basis-point reduction in the bond yield, the dollar depreciates by roughly 1 percent in both cases (with respect to their values at 1:00 p.m.).

In the first step, we consider three types of monetary policy actions. The first is an unexpected change in the target for the FFR that occurs around the time of FOMC announcements, such as those contained in the statement released after every Committee meeting. This is a target shock (TS) and provides our measure of conventional policy because it is directly associated with changes in the funds rate.

The second component of policy is a news shock (NS) associated with any change in the tone of the FOMC statement itself, which might portend changes in the policy rate at some future date. Controlling for this component of monetary policy in the analysis is particularly important, because changes in the statement language have accompanied some of the major announcements regarding the LSAP program. Omitting the news shocks, therefore, could attribute asset price effects to LSAP announcements when the effects in fact stem from changes in forward guidance.

Finally, the third component is an LSAP surprise variable that measures the extent to which any given LSAP announcement was more accommodative than expected, less accommodative, or entirely anticipated. This LSAP shock measure is based on a detailed reading of dozens of newspaper articles published around the days of LSAP statements.

To summarize, we capture three distinct facets of monetary policymaking through three surprise variables: a target shock, which is our measure of conventional monetary policy interventions; a news shock, which reflects changes in the stance of policy over time as reflected in the FOMC statement’s language; and an LSAP shock. We then measure the impact of each of these policy shocks on asset returns by running a regression of the return of each asset in the thirty-minute window surrounding the release of all the FOMC statements since 1999, as explained in detail in the staff report.

Using the coefficient estimates from the regression, we can test the hypothesis that unconventional policy, in the form of LSAP shocks, triggers a set of reactions in asset prices that is statistically indistinguishable from that generated by a surprise change in the federal funds rate. More specifically, we start by constructing the FFR equivalent of LSAP interventions for every asset in our data set. To take stocks as an example, the FFR equivalent for stocks is the FFR target shock that would elicit the same response in stock returns as a given surprise in the amount of Fed purchases. Intuitively, FFR equivalents are a way of placing conventional and unconventional policy—target shocks and LSAP shocks—on the same footing in terms of their effect on asset prices. Once we have computed FFR equivalents for each asset, we can simply test if the FFR equivalent of asset A is the same as that of asset B. If they are, we can conclude that LSAPs affect the relative returns of assets A and B in the same way as target shocks. As we report in the table below, this is in fact true for almost all pairs of assets, suggesting that LSAPs have effects on financial conditions that are very similar to those of conventional policy. 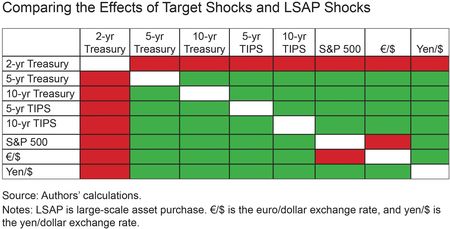 The rows and columns of the table list the main assets included in the analysis: Treasury bonds of various maturities, both nominal and real; the stock market, as captured by the S&P 500 index; and the exchange rate of the dollar versus the euro and the yen. The entries in the table at the intersection of each row and column—for example, where the five-year Treasury row meets the S&P column—report the result of a statistical test of the hypothesis that the FFR equivalent of those two assets is the same. Red entries correspond to rejections of this hypothesis (at the 5 percent significance level), while green entries indicate no rejection. The preponderance of green cells clearly indicates that for most pairs of assets, the relative reaction to conventional and unconventional policy is the same, at least in a statistical sense. The most notable exception is the two-year Treasury note. However, this result is not surprising: The two-year Treasury note showed little response to LSAP surprises for the obvious reason that it remained at the zero lower bound for most of the period in which these surprises occurred.

From this evidence, we conclude that LSAPs have effects on financial conditions that are very similar to those of more conventional approaches to providing monetary stimulus; they move asset prices in the same direction and in roughly similar proportions. This conclusion does not guarantee, of course, that LSAPs are similar to conventional policy in their effects on the macroeconomy, which is the ultimate target of any monetary policy intervention. However, changes in broad financial conditions are one of the main conduits through which monetary policy impulses are transmitted to the rest of the economy, which suggests that the macroeconomic effects of this unconventional policy might also be fairly conventional after all.

Andrea Tambalotti is a research officer in the Bank’s Research and Statistics Group.