This post is the second in a series of six Liberty Street Economics posts on liquidity issues.

The recent financial crisis caused the largest rise in the number of bank failures since the unprecedented banking crisis of the 1980s and early 1990s. This post examines how depositors responded to the amplified risks of bank failure over the last three decades. We show that uninsured depositors discipline troubled banks by withdrawing their funds. Focusing on the recent financial crisis, we find that banks experienced an outflow of uninsured time deposits after the near-failure of Bear Stearns and bankruptcy of Lehman Brothers. This depositor risk sensitivity subsided after the Federal Deposit Insurance Corporation (FDIC) introduced the Transaction Guarantee Account program in October 2008, which raised the maximum deposit insurance limit from $100,000 to $250,000. 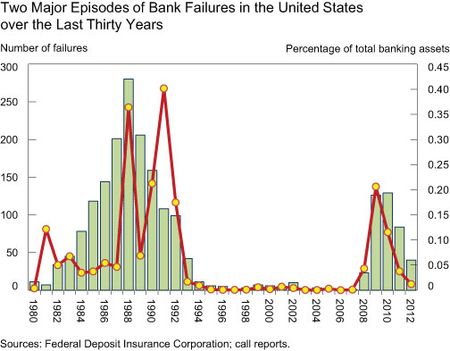 Following the extraordinary upsurge in bank failures in the 1980s and early 1990s, the banking sector was relatively stable for about ten years. However, the sharp decline in housing prices that started in 2006 and the subsequent meltdown of the subprime mortgage sector severely weakened the banking system. With millions of homeowners defaulting on their home mortgages, U.S. banks suffered massive credit losses resulting in a significant rise in bank failures between 2008 and 2012.

Market Discipline of Failing Banks
Depositors can be an important source of market discipline of bank risk-taking. While debtholders and shareholders can typically exert their influence on larger public banks, depositors are an important source of funding across all strata of banks, from small community banks to large, systemically important financial institutions. Uninsured depositors are particularly exposed to the risks of bank failure as they stand to lose a considerable amount of their unprotected deposit investment. Furthermore, as shown in the next chart, large depositors have become an important source of retail funding for banks; their share of total deposits rose from around 30 percent in the mid-1990s to over 45 percent by the mid-2000s. 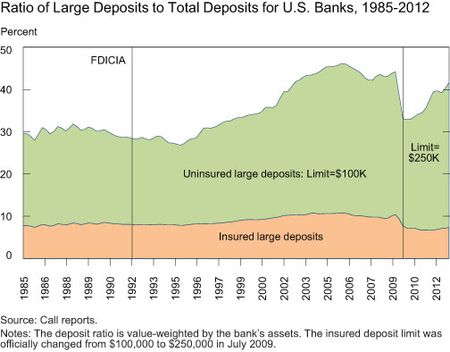 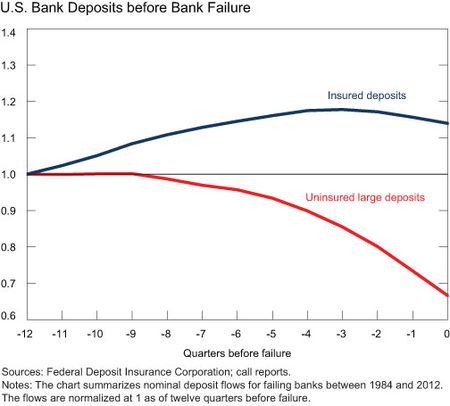 Bank Depositor Response during the Recent Financial Crisis
The previous chart reveals how uninsured depositors responded to the deterioration in the financial condition of banks that eventually failed. Yet their response isn’t limited to these bank-specific extreme cases of financial distress. The collapse of the subprime mortgage markets in 2008 triggered a broad financial crisis that threatened several large financial institutions. At the height of the crisis, Bear Stearns was hastily acquired by JPMorgan Chase and Lehman Brothers was forced to declare bankruptcy after failing to find a buyer. Following the Lehman bankruptcy, throughout the fall and winter of 2008 U.S. banks faced severe strains. The chart below traces the response of insured and uninsured depositors around the Bear Stearns and Lehman failure events. 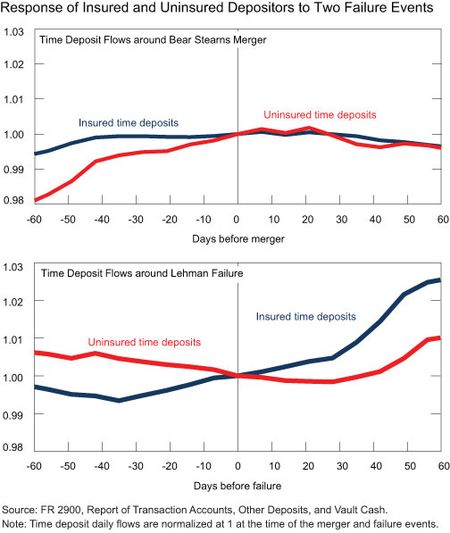 Stavros Peristiani is an assistant vice president in the Federal Reserve Bank of New York’s Research and Statistics Group.