The CLASS Model: A Top-Down Assessment of the U.S. Banking System

Central banks and bank supervisors have increasingly relied on capital stress testing as a supervisory and macroprudential tool. Stress tests have been used by central banks and supervisors to assess the resilience of individual banking companies to adverse macroeconomic and financial market conditions as a way of gauging additional capital needs at individual firms and as a means of assessing the overall capital strength of the banking system. In this post, we describe a framework for assessing the impact of various macroeconomic scenarios on the capital and performance of the U.S. banking system—the Capital and Loss Assessment under Stress Scenarios (CLASS) model—and present some of its key outputs.

Supervisory Stress Testing
In the United States, the first formal supervisory stress tests—the Supervisory Capital Assessment Program (SCAP)—were performed during 2009, and stress tests have since become a permanent supervisory and macroprudential tool through the implementation of the stress test provisions of the Dodd-Frank Act (Dodd-Frank Act Stress Tests, or DFAST) and the Comprehensive Capital Analysis and Review (CCAR). Bank supervisors in Europe conducted coordinated stress tests of the largest European banking companies in 2010 and 2011. Economists at a number of central banks have also constructed system-wide stress test frameworks to assess the robustness of their banking systems to adverse macroeconomic environments and stressed funding conditions.

The CLASS model is a “top-down” model of the U.S. commercial banking industry that generates projections of commercial bank and bank holding company (BHC) income and capital under different macroeconomic scenarios. These projections are based on a set of twenty-two regression models of components of bank income, expense, and loan performance, combined with assumptions about provisioning, dividends, asset growth, and other factors (see the exhibit below). The macroeconomic scenarios are defined by a set of economic and financial market variables—such as GDP growth, the unemployment rate, housing prices, equity prices, short-term and long-term interest rates, and credit spreads—that are likely to affect the profitability of banking institutions. The key outputs of the CLASS model are projections of net income and capital given assumed paths for these economic and financial market variables over the stress test horizon. Following practice in the DFAST and CCAR stress tests, the primary capital metric is Tier 1 common equity, defined as common equity minus the deductions from Tier 1 capital required under U.S. regulatory capital rules. Why a Top-Down Stress Testing Model?
The CLASS model’s top-down approach is intended to complement more detailed supervisory models of components of bank revenues and expenses, such as those used in the DFAST, CCAR, and European stress tests. Unlike such models, the CLASS model relies only on public information, namely, macroeconomic and financial market data combined with bank and BHC regulatory report filings. The use of regulatory report data allows us to compute projections easily for a much larger number of firms and with greater frequency than is practical using detailed bottom-up analysis using supervisory data collected directly from BHCs. In addition, the CLASS framework is relatively simple to understand, and can produce quarterly income and capital projections quickly (in only a few minutes), given a particular macroeconomic scenario. Thus, it can be used both for simulations and to provide immediate back-of-the-envelope estimates of the effect of a particular macroeconomic shock on the U.S. banking system.


What Does This Model Miss?
Balanced against these advantages, the CLASS model’s top-down approach also has some significant limitations. For example, it ignores many idiosyncratic differences between individual institutions. For this reason, while the model can reasonably be used to model aggregate net income and capital, and the overall distribution of capital across institutions, caution should be exercised in using the model to project the capital of a specific bank or BHC.


How Well Capitalized Is the U.S. Banking System?
The chart below presents one key resiliency measure generated by the CLASS model: the capital “gap,” which captures the systemwide shortfall in capital under stressed economic conditions calibrated relative to a specified threshold capital ratio. The capital gap is an indicator of the U.S. banking system’s vulnerability to undercapitalization, given a particularly stressful macroeconomic scenario. The chart shows the capital gap relative to an 8 percent Tier 1 common capital ratio, assuming a repeat of macroeconomic and financial market conditions experienced during the recent financial crisis (specifically, the period from 2007:Q3 to 2009:Q3). The capital gap figures should be interpreted in relative terms and not as absolute measures of a capital shortfall relative to any specific supervisory capital requirement. The time path of the capital gap shows how the vulnerability to undercapitalization of the U.S. banking system has evolved over time.

These projections suggest that the U.S. banking industry’s vulnerability to undercapitalization has declined not only relative to the financial crisis of 2007-09, but also relative to the period preceding the crisis. The capital gap is approximately $100 billion in 2002, and then rises over time, particularly during 2007 and 2008, reaching a peak of $540 billion in 2008:Q4. This upward trend in the capital gap is reversed from 2009:Q1 onward—the capital gap falls sharply between 2009 and 2013, reflecting equity issuance by firms, lower dividends, and other capital distributions, as well as a return to profitability for most banks and BHCs. The measured capital gap as of 2013:Q3, the final bar in the chart, is $8.4 billion, only about one-tenth of its level in 2002. 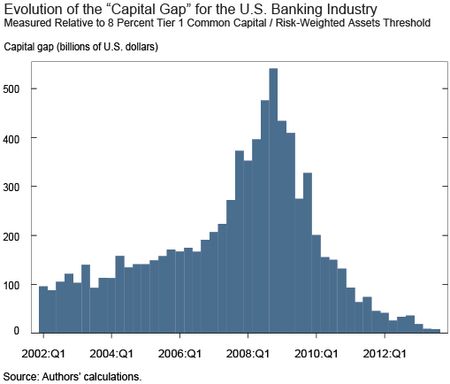 Stress Tests and Early Warning Signals
An important policy question is whether stress testing frameworks such as the CLASS model can provide early warning signals of potential undercapitalization in the banking system. Note that the estimated capital gap begins to increase in 2004, well before the onset of the financial crisis. This increase partially reflects growth in the nominal size of the banking system, although this isn’t the main explanation: Between 2004:Q1 and 2007:Q1, banking system assets increase by 33 percent, but the capital gap rises by a much larger 84 percent. This time path of the capital gap implies deterioration in the banking system’s capital adequacy, relative to stressful economic conditions, in the years leading up to the financial crisis.


Of course, these results are generated by applying the actual macroeconomic conditions that occurred during the 2007-09 financial crisis to the banking industry in the years before the crisis, in essence assuming perfect foresight about the risks facing the banking system. Can stress tests provide meaningful early warning signals as the banking system evolves and the risks it faces change? Although this question is difficult to answer, we view the CLASS model results as an encouraging sign about the value of stress testing as a risk management tool for macroprudential policy. In the future, we plan to refine the CLASS model to facilitate additional policy analysis by improving the model estimates for individual banks and BHCs and enhancing the sensitivity of the model to different types of macroeconomic and financial market scenarios. We also plan to explore simplifications to the model that would allow us to run many scenarios very quickly and thus to take a statistical approach to determining the underlying vulnerabilities of the banking system (for example, explore the characteristics of scenarios that generate capital declines in the tail of the distribution, to see what these scenarios have in common). In short, the CLASS model is a living framework that’s expected to develop over time.


Meru Bhanot is a senior research analyst in the Federal Reserve Bank of New York’s Research and Statistics Group.

Beverly Hirtle is a senior vice president in the Research and Statistics Group.

Anna Kovner is a research officer in the Research and Statistics Group.

James Vickery is a senior economist in the Research and Statistics Group.
Posted by Blog Author at 07:00:00 AM in Financial Institutions