U.S. student debt has more than tripled since 2004, and at over $1 trillion is now substantially greater than both credit card and auto debt balances. There are substantial potential benefits to be gained from taking out a student loan to fund a college education, including higher earnings and lower unemployment rates for college grads. However, there are significant costs to having student debt: The loans frequently carry relatively high interest rates, delinquency is common and costly (involving potential late fees and collection fees), and the federal government has the power to garnish the wages of individuals with delinquent federally guaranteed student loans (in fact, reported federal recovery rates on defaulted direct student loans exceed 70 percent). The ability of U.S. households to make well-informed decisions regarding higher education and student loan take-up for themselves (or members of their households) depends on the extent to which they accurately perceive the costs and benefits of such choices. To what extent does the American public understand the implications of student loan indebtedness? To shed light on this question, we went out and surveyed U.S. households.
In July, we added a set of questions to the New York Fed’s Survey of Consumer Expectations (SCE), introduced earlier on this blog, to gauge the extent to which U.S. household heads understand the dangers of failing to repay student debt. More specifically, the 1,029 survey respondents were asked:

If a borrower is unable to repay her federal student loan, what steps can the government take to collect the debt?

A. Report that the student debt is past due to the credit bureaus.

B. Garnish wages until the debt, plus any interest and fees, is repaid.

C. Retain tax refunds and Social Security payments until the debt, plus any interest and fees, is repaid. 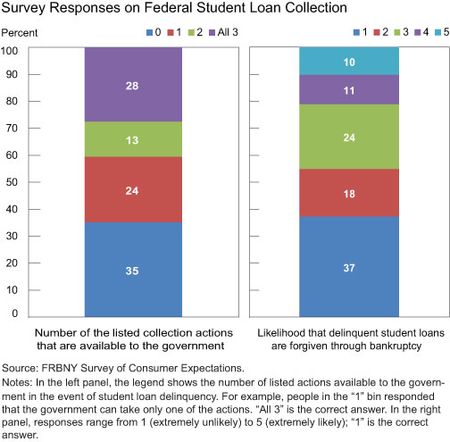 We also asked people about the likelihood that someone’s student debt would be forgiven if they were to file for bankruptcy, on a scale from 1 to 5 (where 1 is “extremely unlikely”). It’s extremely unlikely that a borrower’s student debt would be forgiven if the borrower filed for bankruptcy; the Bankruptcy Abuse Prevention and Consumer Protection Act of 2005 prevents all student loans (whether or not they’re federally guaranteed) from being discharged in bankruptcy unless the borrower can prove “undue hardship” caused by the loan, a very high legal bar. The chart above, right panel, shows that only 37 percent of participants provide the “correct” answer of 1 (that is, extremely unlikely), with the average response being 2.4. This again suggests that U.S. households overestimate the ease with which student loans may be expunged from their balance sheets. 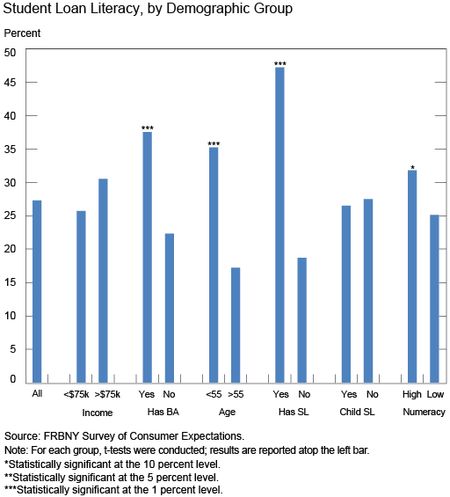 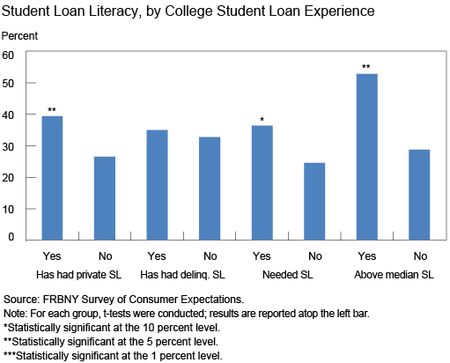 The chart above suggests that individuals’ current level of student loan literacy has been shaped, in part, by their past experiences. We also consider how student loan knowledge of household heads correlates with outcomes of their children’s student loans (including those held either by the child or the parent). We expect higher ex ante knowledge in household heads to lead to “better” outcomes for their children. Since high student debt or student loan delinquency can make it more difficult to obtain a mortgage or credit card on entering the workforce, and private student loans are unsubsidized and can have much higher interest rates than public loans, as well as provide no access to federal Income-Based Repayment (IBR) programs, we expect higher literacy to be negatively related to these outcomes. However, our measure of student loan literacy is not ex ante, so it’s not clear what relationship to expect between the household head’s literacy and the child’s outcomes (since outcomes of children may also have affected the current stock of the household head’s knowledge). We in fact find no significant relationships between student loan literacy and children’s outcomes—probably a sign that causality runs in both directions.


Conclusion
Overall, our analysis reveals that U.S. households have a poor understanding of the implications of being delinquent on student loans. As expected, the level of student loan literacy is higher for individuals with a college degree and those who themselves have taken out a student loan, but even among these groups less than half of the respondents understand all of the consequences of failing to repay a student loan. Our data indicate that individuals’ past experiences affect their level of knowledge. We are, however, unable to provide clean causal evidence of knowledge impacting individuals’ outcomes.  Doing so would require data on respondents’ knowledge stock at a given point in time and outcomes for their household at future points in time—data that we don’t currently have.

As student loans occupy an ever-greater share of national consumer debt, and students are faced with harder decisions about the value of various post-secondary degrees and certifications, it’s imperative that students and their families understand the potential costs (as well as benefits) of holding student debt. Our findings support policy initiatives that provide information to students and parents about student debt when they take out loans, such as the limited provisions of the Higher Education Opportunity Act of 2008. While existing levels of knowledge are low, some efforts are currently under way to augment the public’s knowledge.

Zachary Bleemer is a senior research analyst in the Research and Statistics Group.

Meta Brown is a senior economist in the Research and Statistics Group.

Wilbert van der Klaauw is a senior vice president in the Research and Statistics Group.
Posted by Blog Author at 07:00:00 AM in Education, Household Finance, Labor Economics

The article helps to community in United States of America especially student to give warn and know of his/her loans. Thank you for the post.