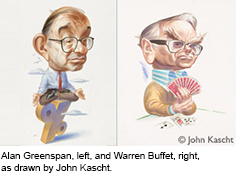 What goes into a good caricature, and how much does the caricaturist know about his or her subject? We can learn a lot from a podcast (47 minutes) featuring the caricaturist John Kascht and focusing on his caricatures of two financial leaders. The podcast, posted on the Smithsonian’s website as part of the Face-to-Face blog from the National Portrait Gallery (and see also podcast list), captures a 2010 presentation by Kascht in which he goes into depth about the research, thought, and technique that went into creating two caricatures: the first, of Alan Greenspan (which Kascht did for BusinessWeek) and the second, of Warren Buffett (commissioned but not published by the Wall Street Journal). Both caricatures were chosen to be part of the National Portrait Gallery’s collection.

In the first part of the talk, Kascht summarizes his development as an artist and some of the influences and motivations behind his work, for which he seems to have unusual insight. In the second part (starting approximately 13 minutes in), he compares the caricatures he created of Greenspan and Buffett. Kascht describes how, prior to creating the drawings, he performs several mental exercises. He first considers what he knows to be the public image or the popular conception of the individual. He then searches out images (this is pre-YouTube) of the individual from all possible angles to form his own reading of the person based solely on physical traits. Lastly, he compares the two. One of the main points Kascht makes is how different the matches were for Greenspan and Buffett (the popular conception of Greenspan did match Kascht’s reading of the multitude of photos of him, whereas for Buffett it didn’t).

Kascht describes how, in creating the drawing for Greenspan:

This was at a time when the economy was roaring . . . . [He] looked above it all . . . this expression of confidence, serenity . . . he was kind of remote. Some of the details I was looking at and magnified—obviously the features: large nose, kind of this bulb-shaped head, the thinning hair which was especially fun and beautiful to paint . . . the hooded eyes . . . eyelids—they concealed his eyes so you can’t really make eye contact with him easily  . . .  there’s not a glimmer in the eyes so there’s not a lot of life and  . . .  it makes him look distant  . . .  The expression  . . .  suggests something about someone who’s  . . .  not superior exactly, but very serene and confident. I was also very aware  . . .  of using horizontal lines  . . .  to underscore that feeling of calmness, staticness, serenity  . . .  the mouth is straight across  . . .  (actually his mouth is a little bit more of an “m” shape)  . . . .  Those kinds of compositional choices aren’t accidental  . . .  I make these choices in order to support what I am trying to do with the portrait  . . .  I put [the light source] over here to throw his face in shadow  . . .  to increase that sense of him being someone whose thoughts are known only to himself . . . .

Referring to his caricature of Buffett, he says:


Kascht mentions that he uses the glasses in each case (Buffett’s are thick to emphasize weightiness) and mens’ earlobes (again, Buffett’s are heavier on the bottom) in the two portraits to express ideas of weightiness versus lightness.

Later in the comparison between the portraits, Kascht makes an off-the-cuff, but very astute remark tying up points about the lightness and heaviness themes in the portraits:


He then talks about the role of art directors, editors, and political correctness in the publishing of drawings. At some point, there’s a reference to ten or twelve drawings of Federal Reserve people that were pulled because an editor “got cold feet.” Kascht jokingly asks a staffer: Was I paid for those ten?