Second in a five-part series

Dynamic stochastic general equilibrium (DSGE) models provide a stylized representation of reality. As such, they do not attempt to model all the myriad relationships that characterize economies, focusing instead on the key interactions among critical economic actors. In this post, we discuss which of these interactions are captured by the FRBNY model and describe how we quantify them using macroeconomic data. For more curious readers, this New York Fed working paper provides much greater detail on these and other aspects of the model. 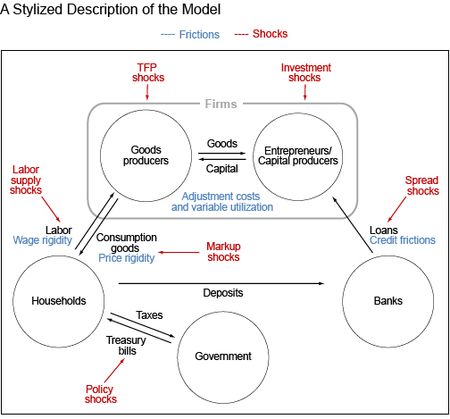 
Finally, the “S” is for stochastic, illustrating the fact that agents face uncertain circumstances when making decisions. The environment faced by agents is subject to random disturbances, called “shocks.” Our model features several such shocks, including: shocks to productivity, which affect the amount of output that can be produced with a given amount of inputs; mark-up shocks, which capture exogenous inflationary pressures, such as those coming from movements in oil prices; and labor supply shocks, which capture changes in demographics or labor market imperfections. In addition, there are financial shocks, which affect the riskiness of borrowers, and shocks to investment demand, which capture changes in uncertainty about future demand, among other factors affecting firms’ desire to invest. Finally, two types of policy shocks capture changes in monetary and fiscal policy.


Agents in the model react to shocks according to the decision rules described above. For instance, when workers’ productivity increases, firms respond by demanding more labor. Similarly, a positive labor supply shock—such as the one associated with the increased participation of women in the labor market starting in the 1960s—implies that households are willing to work more hours at any given wage offered by firms. In our model, these shifts in labor supply and all the other shocks are treated as “exogenous,” in the sense that they are not triggered by changes in the choices described in the model. They are instead a “primitive” driving force, whose movements elicit reactions in all the variables in the model without being affected by them.


To use a DSGE model for forecasting and policy analysis, we must choose values for the parameters that characterize agents’ behavior. There are many ways of performing this task. Following the pioneering work of Schorfheide and Smets and Wouters, we estimate the FRBNY DSGE model using Bayesian methods. This econometric approach makes it possible to combine prior information on the parameters, which might come, for example, from microeconomic studies of agents’ behavior, with information about the time series properties of the variables in the model. These variables are output growth and hours worked (per capita), inflation (as measured by the core component of the Personal Consumption Expenditure deflator), the labor share as a measure of workers’ compensation, the federal funds rate, and the spread between the BAA corporate rate and the ten-year Treasury yield as a measure of borrowing costs (see our New York Fed working paper for details).


Once the model parameters are estimated, the DSGE model can be used to identify the fundamental shocks that might be behind any given event. This type of exercise relies on the fact that the estimated model gives us a mapping from shocks into outcomes for the economy. By “inverting” this mapping (using a popular statistics tools, the Kalman filter, as explained in detail in this paper by Del Negro and Schorfheide), we can obtain an estimate of the disturbances that were behind any given observed economic developments. The next post in this series is an example of this exercise, as it attempts to identify the sources of the Great Recession.

Andrea Tambalotti is an officer in the Group.