« Demographic Trends and Growth in Japan and the United States | Main | How Do Liquidity Conditions Affect U.S. Bank Lending? » 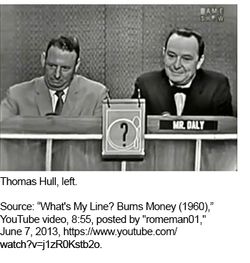 On this date, the four panelists (whose mission it is to guess the contestant’s job with yes/no questions) are Joey Bishop (the guest panelist), Arlene Francis, Bennett Cerf, and Dorothy Kilgallen. Because Thomas Hull is introduced with the brief description “salaried and deals in a product,” the guessing pattern resembles a twenty-questions-like game of trying to figure out the product (money) rather than the nature of Hull’s work (burning). Since we think about money more as a means to a product than a product itself, and since money is so pervasive in daily life, the answer is quite elusive to the panelists.

Here is a selection of questions from the panelists that elicit significant laughter from the live audience:

Cerf: Does this product perform a useful service? (subdued laughter)

Cerf: Are people better off after they’ve used the product? (raucous laughter)

Kilgallen: If I held it in my hand, would I use it on something or somebody? (titter)

Kilgallen: In order to perform its normal use, would I have to move my arm? (robust laughter)

Cerf: Would it be used more by public service corporations than the Army? (subdued laughter)

Francis: Is there anything about this product that is dangerous or could be used in a dangerous way? (raucous laughter)

Francis: Is it anything that helps to get rid of anything else? (raucous laughter)


To get the real flavor of the humor, we suggest watching the video. After an extended mother-in-law joke started by Mr. Bishop, Mr. Daly decides that the panel has to call it quits and reveals that “Mr. Hull burns money.” He ends this segment of the show by fleshing out the nature of Mr. Hull’s job:

Mr. Hull burns money. He is the supervisor for currency destruction with the New York City Federal Reserve Bank . . . and he has a tough job: every day he burns a million and a half dollars in old tired ones, fives, tens . . . But I do want to give you one solace: this money is no longer fit for circulation.