« Evolution of S-Corporation Banks | Main | Historical Echoes: A Stitch in Time Saves You from Carrying Around Worthless Money »

Controlling inflation is at the core of monetary policymaking, and central bankers would like to have access to reliable inflation forecasts to assess their progress in achieving this goal. Producing accurate inflation forecasts, however, turns out not to be a trivial exercise. This posts reviews the key challenges in inflation forecasting and discusses some recent developments that attempt to deal with these challenges.


The behavior of U.S. inflation measures has changed substantially over time. The chart below plots the inflation rates measured by the deflators for personal consumption expenditure with and without food and energy expenditures—or PCE and core PCE, respectively. Inflation rates have varied over the past five or so decades, averaging about 3 percent in the 1960s, 8 percent in the 1970s, 4 percent in the 1980s, and 2 percent since the 1990s. Essentially, the long-run trend in inflation increased during the 1970s, reaching peaks around 1974-1975 and 1980; decreased after 1982-1983; and stabilized at about 2 percent in the early 1990s, where it has remained. (See Cogley and Sargent [2005] and Cogley, Primiceri, and Sargent [2010] for reviews of past inflation behavior.) 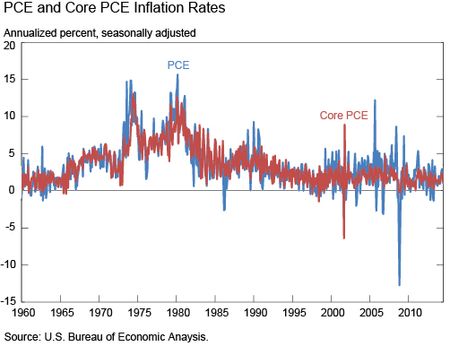 Another issue is how to find the right variables to predict future inflation. Economists often use the Phillips curve relationship, with inflation depending inversely on unemployment—that is, lower unemployment puts upward pressure on wages and, eventually, on inflation. But while an unemployment rate variable is common, it isn’t clear that this is the best gauge. Stock and Watson (1999) and Wright (2009) consider a broader range of possible “economic slack” variables and then use different ways to condense the information in these variables to predict future inflation. Generally, these approaches do as well as or better than autoregressive models. Atkeson and Ohanian (2001), however, conduct a similar exercise but focus on the post-1985 period, which—up to the advent of the Great Recession—was a period typified by remarkably low and stable inflation in the United States. Using the Chicago Fed National Activity Index (CFNAI), which summarizes information across many activity variables, they show that the resulting inflation forecasts are worse than when one just relies on current inflation to forecast future inflation.

Given the effects of changes in inflation behavior on the accuracy of statistical inflation forecasting models, as well as uncertainty about their most optimal specification, it is usually difficult for models to beat judgmental central bank inflation projections. These projections usually follow a bottom-up approach that compiles information across different teams and data sources in a central bank and then modifies the forecast with judgmental views that can adapt when a change in inflation behavior is suspected. Faust and Wright (2009), for the Federal Reserve Board, and Groen, Kapetanios, and Price (2009), for the Bank of England, found that incorporating judgment about the long-run inflation level is what makes these official projections relatively successful in inflation forecasting.

Still, having a non-judgmental benchmark for inflation forecasting that can deal with both inflation instability and uncertainty regarding the predictor choice would be useful. The article “Real-Time Inflation Forecasting in a Changing World,” which I co-authored with Richard Paap and Francesco Ravazzolo, assesses inflation forecasting based on averaging forecasting specifications using a set of fifteen potential predictors, including lagged values of inflation, a host of real activity data such as unemployment and housing starts, term structure data, commodity prices, and inflation expectations from the Michigan survey. The model average, where each individual specification’s weight is driven by its relative importance for inflation, allows for different channels of instability, either in the coefficients of each individual specification within this average or in the error variance of the overall model average, or both.

Our framework models the PCE and GDP deflators for the 1960-2011 period and compares the forecasting performance with that of the previously discussed Stock and Watson (2007) inflation trend model. For the post-1984 period, encompassing both the Great Moderation and the Great Recession episodes, our analysis shows that averaging over a large number of predictors as well as allowing for instability produces inflation forecasts that are, on average, about 10 to 15 percent more accurate than the inflation trend model. These forecasts also have larger gains in accuracy compared with those methods that use only current inflation or inflation lags, those that use many potential predictor variables but don’t allow for instability, and traditional unemployment-based forecasts.


The approach of combining many inflation prediction specifications while allowing for inflation instability is most useful in predicting slowdowns in inflation over the twelve months following the estimate. Within this time frame, the model has an average 20 to 30 percent improvement in forecast precision over inflation trend predictions. Future inflation accelerations, however, aren’t well tracked by our model. This is consistent with the 2010 Jackson Hole paper by Mark Watson and James Stock, which suggests that slack variables, such as the unemployment rate, can only predict inflation when they are worsening relative to the preceding business cycle peak. Thus, only during economic slowdowns do activity measures seem to have predictive information for inflation.

Attempting to attach “statistical significance” to a non-stationary process using models based on “stationary stochastic assumptions,” is clearly not valid. The author’s alternative seems to be to use “…judgement about the long-run inflation level” (clearly non-statistical), which casts the estimation of “long-run inflation level” into some doubt and readily allows a “political” impact on such a very important metric. This attempt to apply modeling based on the assumptions of stationary stochastic parameter-estimation is clearly wrong, when the under-lying processes are intrinsically non-stationary (a common problem with many current estimates). Also, the use of “judgement” is clearly non-statistical and subject to all kinds of bias (such as creating a “politically-derived” metric).

Thanks for an interesting overview. Regarding your last point, and reintroducing a bit of human judgment, could it be that the post-1984 period has generally been one of very weak labor bargaining power? Thus when unemployment goes up, employers can easily compress salaries, while when it goes down, people are only happy to find work again. The fact that the only significant period of strong employment, in the 90s, has been accompanied by declining inflation certainly does not help the predictive value of labor market slack.

I think behavior inflation has changed substantially over time and it complicates inflation forecasting. How to find the right variables to predict future inflation?