Global asset market developments during the summer of 2013 have been attributed to changes in the outlook for U.S. monetary policy, starting with former Chairman Bernanke’s May 22 comments concerning future curtailing of the Federal Reserve’s asset purchase programs. A previous post found that the signal of a possible change in U.S. monetary policy coincided with an increase in global risk aversion which put downward pressure on global asset prices. This post revisits this episode by measuring the impact of changes in Fed’s expected policy rate path and in the economic outlook on the U.S. dollar and emerging market equity prices. The analysis suggests that changes in the U.S. and foreign outlooks had a meaningful role in explaining global asset price movements during the so-called taper tantrum.

The earlier post Risk Aversion, Global Asset Prices, and Fed Tightening Signals used a statistical model estimated with data for U.S., euro area, Japanese and emerging market equity markets, the U.S. and euro area bond markets, commodities, and the dollar, where the current changes in the values of these assets are regressed on past changes in the values of all the assets, with the changes not explained being “residuals.” Then, shocks to risk aversion were estimated by looking at shifts in the correlations across the model’s residuals when there are large changes in overall implied volatility. That analysis suggested that substantial increases in risk aversion coincided with Bernanke’s testimony, resulting in a significant downward pressure on global asset prices in the two months after it.

However, measuring changes to global risk aversion is a difficult exercise and the previous effort did not link it explicitly to either changes in policy expectations or to changes in the economic outlook. Here, the same statistical model and methodology are used to look at shifts in the corresponding residuals’ correlations on three sets of days:


Using an approach similar to that used in Mertens and Ravn (2013), it is possible to quantify the shocks due to revisions in market participants’ U.S. and foreign economic outlooks as well as due to revisions in expected future Fed policy and use the model to estimate the impact of these shocks on asset prices.

The chart below plots the percentage change over the previous month on a given day of an index of forty-five dollar exchange rates. The blue line is actual data, the red line is the counterfactual version where the model strips out shocks to the expected Fed policy, and the green line strips out shocks to both the U.S. and foreign economic outlook. The gaps with the actual swings indicate the degree to which the two types of shocks affected the dollar.

The chart above marks Bernanke’s testimony to Congress and the December 18, 2013, FOMC statement as key events, with Bernanke’s discussion of tapering leading to heightened uncertainty about the Fed’s monetary policy path and the December FOMC statement announcing the actual tapering of large-scale asset purchases starting in January 2014. The model suggests that the dollar appreciation from May through June 2013 can be explained as a result of a change in market reassessments of the Fed’s policy path going forward, but can also be explained by changing U.S. and foreign growth expectations. 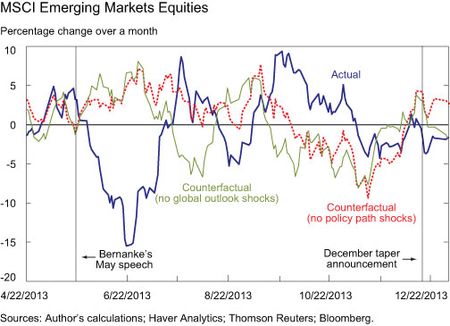 Note that in both charts the story is different around the time of the December taper announcement. It was a reassessment of future Fed policy and not revisions of growth expectations that was pushing the dollar higher and emerging market equity prices lower during this period.