« What Do Banks Do with All That “Fracking” Money? | Main | Crisis Chronicles: The Panic of 1819—America’s First Great Economic Crisis »

Why Do Banks Keep All That “Fracking” Money?

In a recent post, I discussed the significant impact that “fracking” and other unconventional energy development has had on bank deposits. Using this deposit windfall, I estimated how banks allocate these funds, finding that over the recent business cycle they reduced the portion used for loans. In this post, I will discuss what may have influenced the decision to lend these funds or to hold liquid assets like cash or securities.

The chart below, also reported in my first post, illustrates how banks in unconventional energy areas reduced their allocations to lending during the Great Recession. The line segments indicate the period over which the allocation decisions are estimated, the points reflect the midpoint of the period. The first segment is the pre-recessionary period, the second is the peak of the financial crisis from mid-2007 to mid-2009, the third is the recession from mid-2009 to mid-2011, and the final is 2012. The dashed line is the percentage of the deposit shock allocated to liquid assets and the solid line is the percentage allocated to loans. Details regarding these estimates can be found in the related staff report. 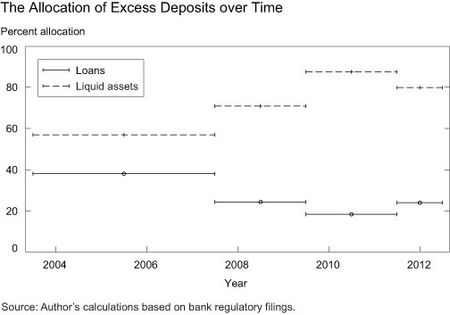 Can Weak Loan Demand Explain These Patterns?
These patterns could reflect sluggish demand for loans by businesses and households. As loan demand ebbs, banks are unable to find borrowers and instead hold liquid assets. Yet other evidence suggests additional forces are at work.

For example, measures of economy activity do not vary much in these energy-producing areas. Unlike in non-energy counties, business establishment growth remains positive in energy counties, even during the recession. The chart below summarizes the average log difference in establishments for the four estimation periods. Establishment growth is almost at its pre-recession level by 2008-10 and exceeds it in the final period. While this does not rule out weak loan demand as an explanation, it does highlight the relative strength of businesses in these areas. 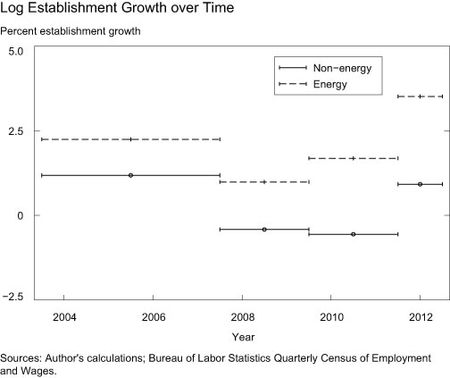 For banks in energy-producing areas, there are three major uses of the deposit windfall: they can make more loans, invest in liquid assets, and pay down debt. If loan demand falls, all else being equal, other uses of funds should increase. Therefore, I should see both increased allocations to liquid assets and increased paydown of debt. In the pre-recessionary period, 2003-07, 9 percent of the deposit inflow is allocated to debt paydown. However, when loan allocations fell during the recession, banks reduced debt paydown and increased liquid asset allocations. The pattern of activity is not consistent with the falling loan demand narrative.

Finally, if the cause is a shortage of demand for loans, larger banks with a wider footprint should be better able to find uses for funds. A test to see if banks operating in more counties exhibit a stronger lending propensity during this period does not detect a meaningful difference; banks with more than one branch lend slightly more, but the difference is small and not statistically significant.

What Are Other Impediments to Bank Lending?
Another possibility is that banks sought additional liquidity as a precautionary measure against future runs or potential losses. Precautionary liquidity is consistent with banks’ increased demand for liquid assets, like cash and securities, and reduced debt paydown. Banks with liquidity demand would rather maintain cash on hand than return funds to lenders.

To address this question, I compare the lending behavior of banks with a history of non-deposit borrowing to those without. Non-deposit borrowing is an indicator of a bank’s ability to access funds from other parties. The next chart summarizes the results. Prior to the crisis, borrowers and non-borrowers invested a similar portion of fracking deposits in loans. However, during the crisis period, borrowers roughly maintained their pre-recession allocation levels and non-borrowers’ levels fell to almost zero. Therefore, access to financing appears to be an important characteristic in determining banks’ changing investment behavior. 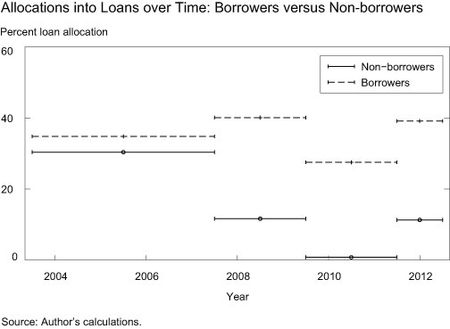 A second factor that appears to matter for the propensity to lend is the Tier 1 capital ratio of the bank, which represents its risk-weighted leverage. Given the banks in this study operate in similar areas and invest in similar assets, their choice of Tier 1 capital reflects their attitude toward risk; the more capital a bank holds relative to its assets the less risky the bank. 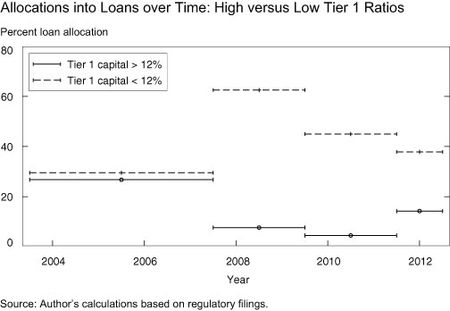 Conclusions
The development of unconventional energy provides a unique laboratory to observe how banks allocate unsolicited deposits. The ability of affected banks to allocate deposits toward loans varied significantly over the business cycle. While loan demand may have declined in the crisis, it does not easily explain why banks reduced both debt paydown and lending in order to hold cash and securities. When I compare different types of banks, I observe banks that lack access to non-deposit
financing and banks with less tolerance for risk are more sensitive to the business cycle, consistent with a heightened demand for precautionary liquidity. The results highlight heterogeneity in banks’ response to the business cycle that can impede capital reallocation during downturns.

Matthew Plosser is an economist in the Federal Reserve Bank of New York’s Research and Statistics Group.