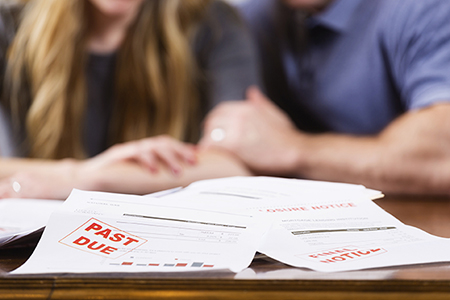 
Cohort Default Rates—Nine Years Out
We can now produce default rates by this cohort breakdown. In our calculations, the denominator is the number of borrowers who entered repayment during a specific cohort year and the numerator is the number of borrowers from that cohort who have ever defaulted on their loan since they entered repayment. The chart below shows our calculations for the 2005, 2007, and 2009 cohorts. Roughly one quarter of each of the cohorts has defaulted as of the fourth quarter of 2014. Note that the default rate of the 2009 cohort has surpassed that of the earlier cohorts much more quickly. In fact, the chart shows a pronounced worsening of the cohort default rate schedules over time. CDRs at all durations are higher for more recent cohorts, with only one exception being the two-year default rate of the 2009 cohort. This exception should be interpreted with caution, however, as it was the sole data point affected by uneven credit reporting in 2011. 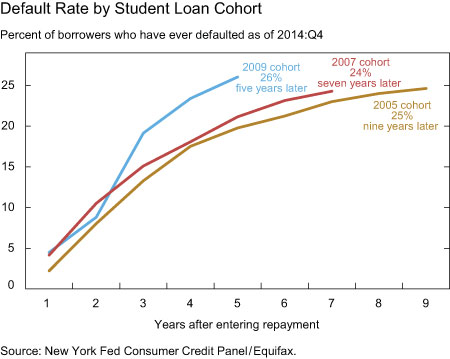 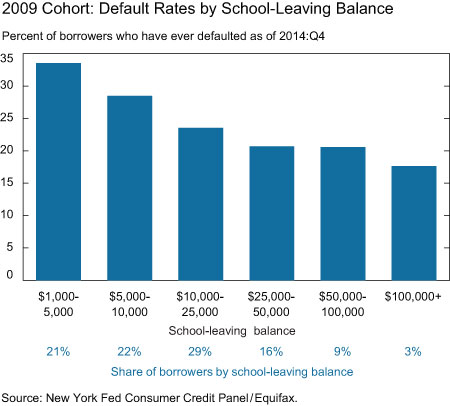 Wilbert van der Klaauw is a senior vice president in the Bank’s Research and Statistics Group.
Posted by Blog Author at 07:00:00 AM in Household Finance, Student Loans

Of those that default--what fraction ultimately resume repayment?

Large loan balances are more likely to be owed for expensive professional degrees, such MDs, which enable the individual to earn substantial income.

In determining whether or not to deny loans based on certain criteria--e.g. need for remedial coursework, ex prisoners, one should also consider whether there are a large number or even a majority who benefit from the loans but do not default.

Thanks to our commenters for raising a number of interesting issues.

To Raymond: Thank you for sharing your experience from the front lines, which nicely conforms to what we have found in our data. You may be interested in a speech that our Director of Research gave recently, which touched on some of these issues: http://www.ny.frb.org/newsevents/speeches/2015/mca150205.html

To Mossup: Our data is a panel of representative anonymous loans, and we see the loan status as of the end of each quarter, therefore, we can see any previous default without any imputation. To the extent that erroneously reported defaults have been corrected by the end of a quarter, they will not be counted.

To morelipstick4pigs: Unfortunately our data do not indicate the level of education for which a loan is obtained so we are unable to distinguish between undergraduate vs. graduate vs. parent loans, but in future analyses we plan to disaggregate by age to obtain further insight into this potentially important variation.

And how does CCP filter out accounts erroneously reported as defaulted and then corrected? Or are those still in the "ever defaulted" category? It is implausible that 7 percent of borrs who currently have open nondefaulted accounts have a past default. Loan rehabilitation removes the default from the credit record. One could impute the existence of a previous default from the delinq reporting but this would not be very accurate as a measure. The rehab rate also couldn't be that high and the rehab redefault rate couldn't be that low.

The student debt is an aggregate number which needs to be dis aggregated by graduate debt versus baccalaureate or associates debt, and then break that debt down by size. This data sifting could be expected to reduce not just the overall average but also impacted distribution student debt by age cohort. A study by National Center for Education Statistics reported that in the year 2013 and 2012 graduate student debt was composed of 16 to 18% of the total debt.
My favorite story illustrating the need to separate student loan data by degree is from the OWS interviews, where a cohabitating couple explained that they were in a graduate program for their Master’s degree from the Ivy League university and were afraid of the prospect of eating beans for the next 10 years because of their debts, expressing a breathtaking expectation of entitlement, indolence, total financial naiveté when they signed the papers.

Those are the years when underwriting of private loans had loosened significantly and their lending practices actually became higher-risk than the demographics of the federal loans, which were predominantly going to students at low-risk colleges at that point. During this period shareholders and investors were questioning the high forbearance and chargeoff rates of private loans; news articles and 10Qs document these trends.

Students also did not have to get approval from financial aid offices to get a private student loan. Direct marketing was significant.

How much of these 'default rates' were students who didn't get a federal or federally guaranteed loan? Thanks.