The 2005 Bankruptcy Reform and the Foreclosure Crisis -Liberty Street Economics 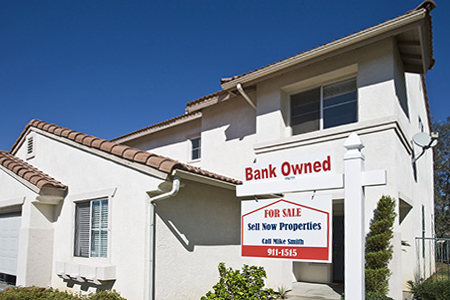 Transitions into Foreclosure
We estimate the frequency transition probabilities of individuals across different credit states over time. In the chart below, we first show the four-quarter-ahead transition probabilities from Delinquent (any account up to 90 days late) with no foreclosure to states with foreclosure, specifically Insolvent (at least one account 120 or more days late or charged off) with foreclosure. We restrict attention to homeowners, who in our sample correspond to the individuals who display any type of real estate debt in the last four quarters. We report estimated transitions for the overall population of homeowners (the solid blue line) and those in the bottom quintile of the credit score distribution four quarters prior (the red dashed line). The vertical line indicates the effective date of the BAPCPA in the third quarter of 2005, while the gray bars denote NBER recession dates. The chart shows a sharp rise in the transition into Insolvent with foreclosure. The rise in the transition probability to this state is more pronounced for the bottom quintile of the credit score distribution. 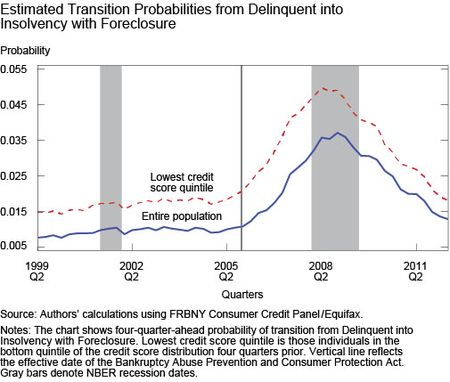 Insolvency, Bankruptcy, and Foreclosure
To better understand the relationship between insolvency, bankruptcy, and foreclosure, we adopt an event-study approach. If the substitution hypothesis is valid, then for individuals who enter a spell of financial distress we should see lower bankruptcy rates, higher foreclosure rates, and higher rates of delinquency on home loans after the reform, relative to before.

We first study the behavior of individuals who become newly insolvent in a given quarter after two years of no insolvency, and examine their behavior for sixteen quarters around their initial insolvency. We consider their bankruptcy and foreclosure rates at various horizons before and after their new insolvency. As can be seen from the charts below, starting at the quarter of implementation of the reform, these individuals display an overall decline in bankruptcy filings at all horizons after insolvency, and a rise in foreclosure rates. 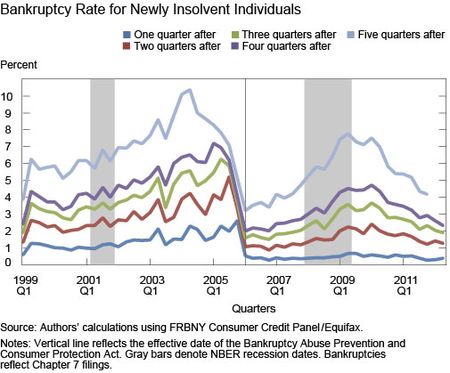 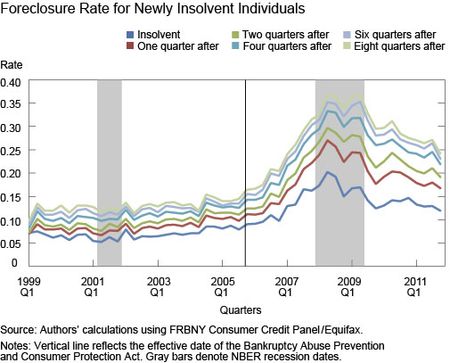 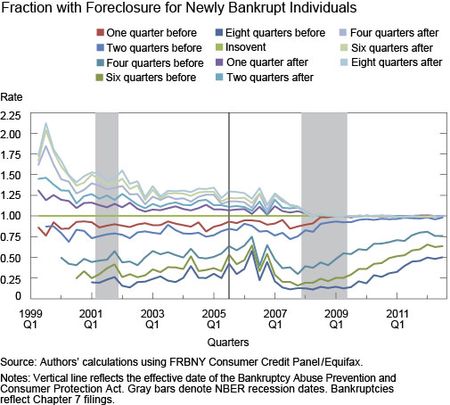 Cross-District Variation
In our previous post, we documented the large variation in bankruptcy filing costs associated with the reform across judicial districts. We also showed that the reform had bigger effects on bankruptcy filings and insolvency in those districts with the largest cost increases. We now exploit the cross-district variation in filing cost changes to shed light on the impact of the bankruptcy reform on bankruptcy and foreclosure. We estimate a simple difference-in-difference regression model, where the percentage cost change interacted with a post-reform dummy is the main explanatory variable. We also include time-varying district-level economic controls, such as personal income, the unemployment rate, and an index of house prices, together with a number of state- and district-level judicial and regulatory controls.


Conclusions
The evidence presented suggests that one consequence of the 2005 bankruptcy reform is that individuals who would have filed for bankruptcy prior to the reform instead substitute into foreclosure. This change in behavior is amplified for those at the bottom of the credit score distribution, who were more affected by the rise in bankruptcy filing costs associated with the reform. Given that the reform was implemented in the third quarter of 2005, it may, through the channels we’ve described, have amplified the housing and foreclosure crisis, especially for low credit score borrowers.


Jaromir Nosal is an assistant professor in the Economics Department at Columbia University.

Matthew Ploenzke is a research associate in the Group.
Posted by Blog Author at 07:00:00 AM in Liquidity, Macroecon

Last week Liberty Street did a series of blogs on student debt identifying the impact of this debt on the broader economy. Since student debt is the second largest form of consumer debt after mortgages and has always been very difficult to discharge, it would be interesting to quantify the relationship, impact, and prevalence of student debt on insolvency and the transition to foreclosures.