« The 2005 Bankruptcy Reform and the Foreclosure Crisis | Main | No Guarantees, No Trade! » 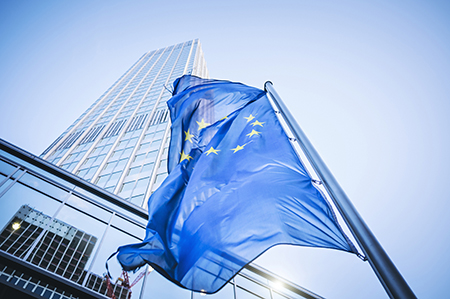 As shown in the chart below, euro area inflation has declined steadily since 2012. The chart also shows a similar decline during the previous recession that extended from first-quarter 2008 to second-quarter 2009 (indicated in gray shading). Because of this parallel, it would be interesting to know individuals’ views of these inflation episodes and how they compare. 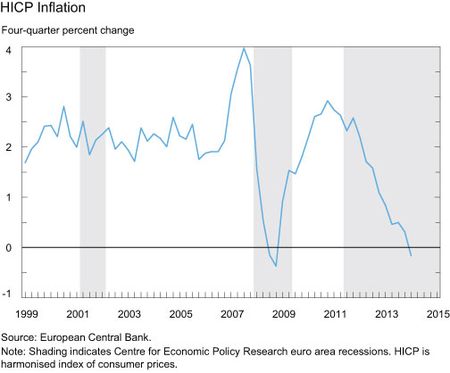 One useful source of information on the European inflation outlook is the quarterly European Central Bank (ECB) Survey of Professional Forecasters (ECB-SPF). Like its American counterpart (US-SPF), the ECB-SPF asks participants for both their point forecasts and density (histogram) forecasts for several macroeconomic variables, including inflation, at various horizons. The density forecasts indicate the confidence that participants attach to their point forecasts and also reflect any concerns about tail risks—outcomes that may be far away from their point forecast. The most recent ECB-SPF was collected from January 7 to 13, 2015. An important consideration for our discussion is that while the timing of the survey incorporates much of the recent decline in energy prices, it can only incorporate expectations of the ECB’s bond-purchase stimulus program which was announced on January 22. We return to the latter issue in our closing remarks. 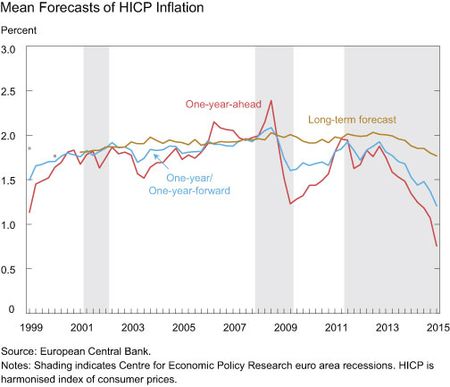 While the point forecasts tell us about average predicted values and the perceived persistence of inflation movements, they don’t provide insights into other aspects of the participants’ inflation outlook. For example, we don’t know anything about either the degree of confidence or the extent of any tail risk that participants attached to their point forecasts during the two low inflation episodes. For this purpose, we can turn to the density forecasts which are represented by a histogram in which participants assign probabilities to prespecified bins that provide a range of possible outcomes for the forecasted variable.

The next chart depicts the aggregate density forecast distribution for inflation at the long-term horizon, constructed by using a simple average of the individual density forecasts. We calculate the 50th percentile (the median) which tracks the long-term inflation outcome where half of the aggregate probability is above and half below this value. The median is similar to the mean but less sensitive to outliers. Two interesting spreads are the difference between the 25th and 75th percentiles (the interquartile range), which provides a measure of variability, and the difference between the 10th and 90th percentiles, which provides information about the tail risk. 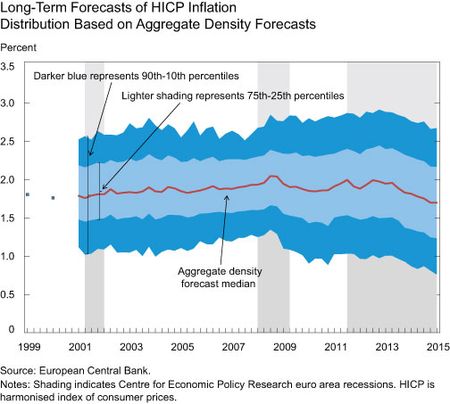 The aggregate density forecast reveals several interesting findings. For example, the behavior of the median is qualitatively similar to the mean of the long-term point forecasts. In particular, both show the same stability during the 2008-09 period and the decline during the post-2012 period. However, we now have more details about participants’ long-term outlook for inflation during these episodes. For the 2009-10 episode, the 90th, 75th, and 50th percentiles remain relatively unchanged while the 25th and 10th percentiles declined. This pattern shows that the forecasters perceived greater downside risk associated with their point forecasts. In contrast, the post-2012 period generally shows the 10th through 90th percentiles declining in a roughly parallel fashion—a pattern indicating that the entire density forecast is shifting down, rather than reflecting greater tail risks on the downside. Taken together, inspection of the point forecasts and aggregate density forecasts from the ECB-SPF reinforces the view that that there has been some unanchoring of long-term inflation expectations in the euro area.

On January 22, the ECB announced a bond-purchase program in excess of €1 trillion.  While the official announcement occurred after the survey, it is likely that participants had anticipated the introduction of such a program but remained uncertain about the details. This anticipation may account for the stabilization of the point and density forecasts of long-term inflation in the latest survey.

The next ECB-SPF survey, collected in April and released in May, will be especially useful to gauge whether the ECB’s bond-purchase program is having a measurable impact on long-term inflation expectations. If the details of the program are viewed favorably, then we might expect the next survey to show the long-term inflation aggregate forecast density distribution beginning to shift back toward the ECB’s stated inflation objective. The possibility remains, however, that despite this policy intervention the long-term evolution of the ECB-SPF inflation forecasts may continue to follow the post-2012 path if the ECB’s actions are viewed as insufficient.

Matthew Ploenzke is a research associate in the Research and Statistics Group.

Michael Stewart is a research associate in the Research and Statistics Group.