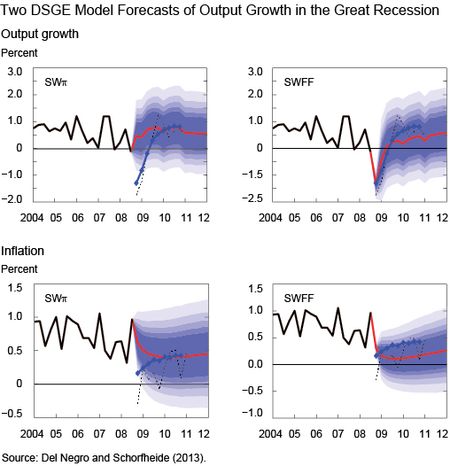 It appears that an econometrician using the SWπ model would have had no clue of what was happening to the economy. The SWFF model, though, predicts output in 2008:Q4 just as well as the Blue Chip forecasters and a subsequent very sluggish recovery and low inflation, which is more or less what happened afterwards. (To better understand the behavior of inflation in the last five years, see a previous Liberty Street Economics post entitled “Inflation in the Great Recession and New Keynesian Models.”) The key difference between the two models is that SWFF uses spreads as a piece of information for forecasting (the spread between the Baa corporate bond yield and the yield on ten-year Treasuries, to be precise) while the SWπ model does not. The reason why we look at these two models is that before the crisis many macroeconomists thought that spreads and other financial variables were not of much help in forecasting (see this article by Stock and Watson).

The chart above suggests that the issue of which of the two models forecasts better is pretty settled. Yet the chart below shows that this conclusion would not be correct. It shows the forecasting accuracy from 1991 to 2011 for the SSWπ (the blue line) and the SWFF (the red line) models, as measured by the log-likelihood of predicting what actually happened in terms of four-quarter averages of output growth and inflation, with lower numbers meaning that the model was less useful in predicting what happened. For long stretches of time, the model without financial frictions actually forecasts better than the model with frictions. This result is in line with Stock and Watson’s findings that financial variables are useful at some times, but not all times. Not surprisingly, these stretches of time coincide with “financially tranquil” periods, while during “financially turbulent” periods such as the dot-com bust period and, most notably, the Great Recession, the SWFF model is superior. 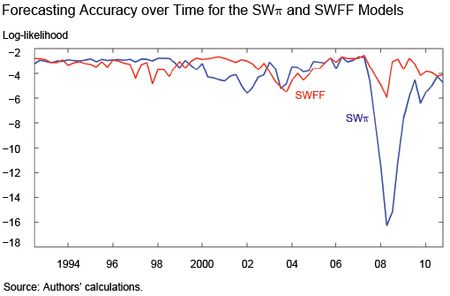 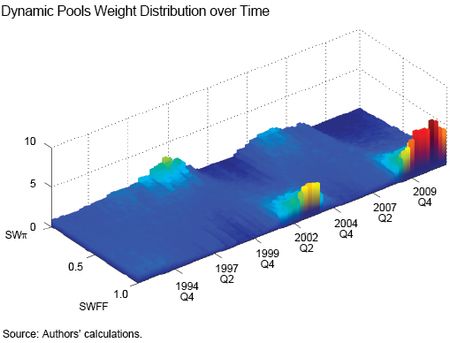 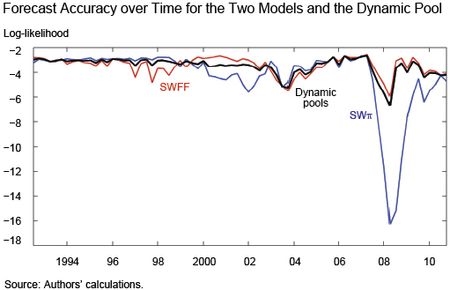 "The chart above suggests that the issue of which of the two models forecasts better is pretty settled. Yet the chart below (Forecasting Accuracy Over Time...) shows that this conclusion would not be correct."

I disagree since it is clear to me upon viewing "the chart below"that SWpi is better than SWFF for much of the time, it is only a little better. When SWFF is better, it is much better.

A more important point is that while your bucket sloshing pobservation is interesting, it is based on so few sloshes that I would have little faith in any prediction as to when the next slosh would occur.

I look forward to the second part of your well written paper.