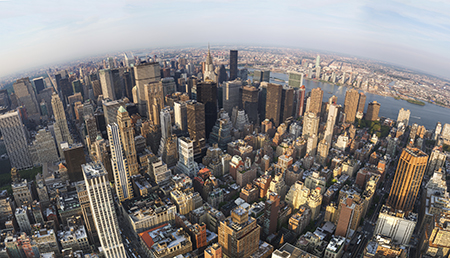 Since late 2009, when statewide employment began to recover, job growth across the Empire State has kept pace with that of the United States, growing at an average annual rate of 1½ to 2 percent. The preliminary data for 2014 had indicated some slowing in growth, but the recent revisions point to continued sturdy job creation. And the most noteworthy upward revisions accrued to what was already the strongest local economy in the state: New York City. This makes 2014 the eighth straight year in which the city’s job growth rate has surpassed the nation’s—an unprecedented phenomenon given that, prior to 2007, the city only rarely even matched the nation in job creation. A number of upstate metro areas also saw upward revisions for 2014—most notably, Buffalo and Rochester—but none tallied anywhere near the roughly 3 percent revised job growth seen in New York City. One of the few areas to see a downward revision was Long Island, though employment trends there remain favorable.

In New Jersey, job counts have yet to fully recover to pre-recession levels, but the employment revisions paint a somewhat brighter picture of recent trends. Whereas the preliminary numbers showed job growth stalling out in the latter part of 2014, the new numbers show job creation continuing at a moderate pace through the end of the year. Still, as shown in the chart below, total employment expanded by less than 1 percent from late 2013 to late 2014—less than half the nationwide pace. Within the state, the (newly designated) Middlesex-Monmouth-Ocean division was one of the stronger areas in terms of job growth—possibly a sign that much of the Jersey shore, hard hit two-and-a-half years ago by Sandy, is now seeing more of a bounce-back. Statewide, there was an exceptionally large upward revision in construction employment. 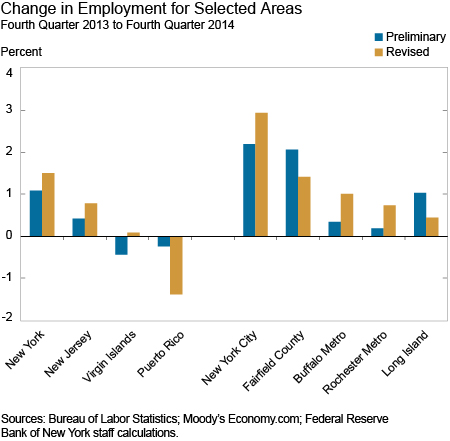 Elsewhere in the Second District

The Second Federal Reserve District also includes Fairfield County (Connecticut), as well as Puerto Rico and the U.S. Virgin Islands. In Fairfield County, revisions were fairly minor; as in the preliminary data, job growth was modest through much of 2014 but picked up noticeably toward the end of the year. In Puerto Rico, the level of employment was revised downward for all of 2014. A previously reported pickup in employment at the end of 2013 was revised away, but trends since then look about the same as they did before the revision: employment has been essentially flat since last summer, with some pickup in the private sector offset by a continued downward drift in the public sector. Finally, in the U.S. Virgin Islands, which have been in an economic slump since around 2006, the revisions were modest and show that the economy has leveled off but has yet to show any signs of a meaningful rebound.

James A. Orr is a vice president in the Bank’s Research and Statistics Group.