Just Released: Is Your School Spending Less Than Your Neighbor’s? 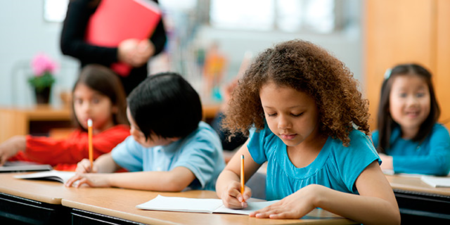 This morning, the Federal Reserve Bank of New York released a set of interactive visuals that present school spending and its various components—such as instructional spending, instructional support, leadership support, and building services spending—across all thirty-two Community School Districts (CSD) in New York City and map their progression over time. The interactive features allow the user to easily view the data and observe spending trends. Our purpose is to make data on education finance more accessible to a broader audience.

We built the dataset using data obtained from the New York City Department of Education. These numbers reflect current spending, and thus exclude capital spending (which accounts for approximately 8 percent of total spending). All spending figures are expressed in real 2012 dollars. We refer to school years by the year corresponding to the spring semester. Below, we offer a few quick insights that are revealed in the interactive graphics.

1. New York City school spending steadily increased through 2010, and then declined modestly in 2011 and 2012.

For the full 2004-2012 period, while total spending rose 23 percent, instructional spending per student, the category most closely associated with student learning outcomes, increased 13 percent, which is the lowest growth rate across all spending categories. In contrast, instructional support services (counseling staff, physical, occupational and speech therapy services, paraprofessional support for special needs students, and after-school activities) increased 63 percent, the highest growth rate across all categories. This was mostly driven by a large increase in special needs services, including a recent marked increase in occupational therapy services in New York City schools. Non-instructional categories (principals, custodial services, transportation, and safety) also increased, at rates around 20 to 30 percent. Overall enrollment fell 4 percent between 2000 and 2012.

Click on the image below to view the interactive map that shows the progression of total spending (and its components) through time. 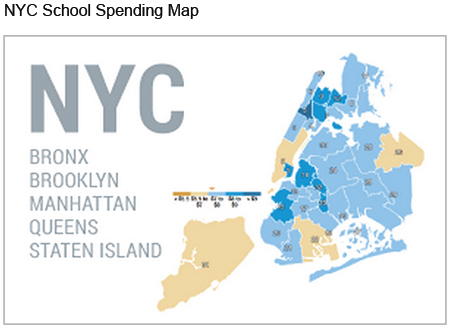 2. There are differences in school spending across boroughs. 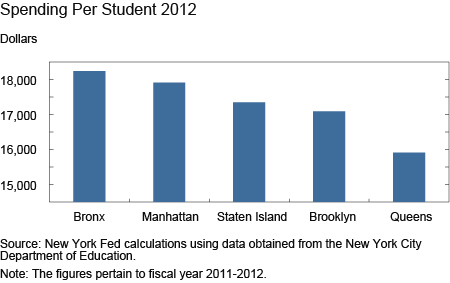 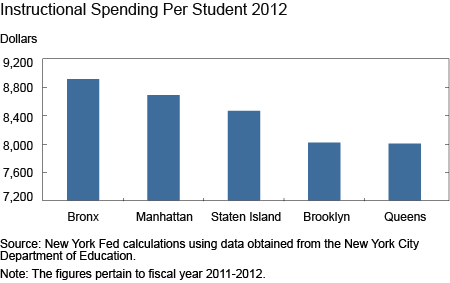 3. There are differences among CSDs, even within the same borough.

CSD 26 (in Queens) had the lowest spending per student in New York City for the entirety of our panel, while various CSDs held the top spot across time. In 2004 and from 2006 to 2008, CSD 5 (in Manhattan) had the highest spending per student in all of New York City; in 2005, it was CSD 1 (in Manhattan); from 2009 to 2010, it was CSD 7 (in the Bronx); from 2011 to 2012, it was CSD 16 (in Brooklyn). In 2012, the difference between the highest and lowest CSDs in New York City was 24 percent, a substantive difference. As before, note that demographics are an important factor in explaining variation between CSDs.
Click on the image below to view interactive charts that compare school spending (and its components) across New York City CSDs and boroughs. 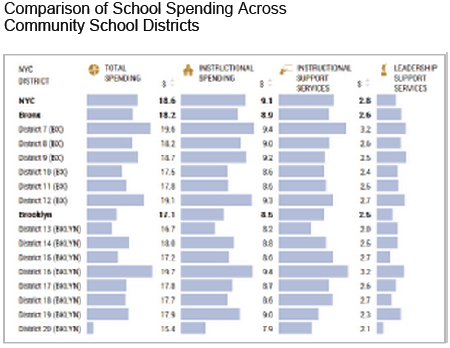 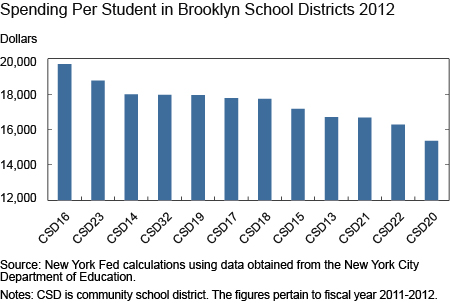 We at the New York Fed are interested in understanding these spending differences more fully, so stay tuned for future posts exploring the importance of demographic variations in explaining these differences.