The monetary base in the United States, defined as currency plus bank reserves, grew from about $800 billion in 2008 to $2 trillion in 2012, and to roughly $4 trillion at the end of 2014 (see chart below). Some commentators have viewed this increase in the monetary base as a sure harbinger of inflation. For example, one economist wrote that this “unprecedented expansion of the money supply could make the '70s look benign.” These predictions of inflation rest on the monetarist argument that nominal income is proportional to the money supply. The fact that the money supply has expanded rapidly while real income has grown very modestly means that sooner or later prices will have to catch up. Most academic economists (from Cochrane to Krugman and Mankiw) disagree. The monetarist argument arguably applies only to non-interest-bearing central bank liabilities, but since October 2008 a large fraction of the monetary base has consisted of reserves that pay interest (the so-called IOER, or interest on excess reserves) and one linchpin of the Fed’s “policy normalization principles” consists precisely in raising the IOER along with the federal funds rate. Since reserves pay close to market interest rates, they are close substitutes for other short-term assets such as Treasury bills from a bank’s perspective. As long as the central bank can affect the return on these short-term assets by adjusting the IOER, controlling inflation with a large balance sheet seems no different than it was before the Great Recession. 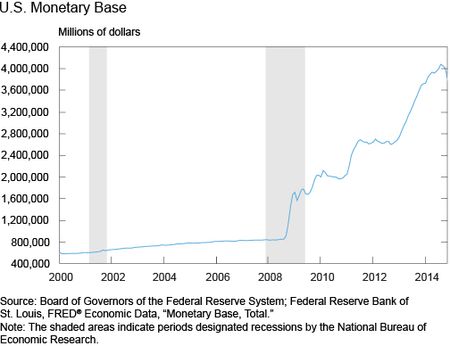 In fact, if we look at expansion of the central bank’s balance sheet (known as LSAP—large-scale asset purchases—within the Fed, and as QE—quantitative easing—to the rest of the world) from the perspective of the consolidated budget constraint of the U.S. government, we realize that the expansion shortened the maturity structure of the federal debt (at least for the part concerning the purchase of Treasuries), as explained in the LSE post “More Than Meets the Eye: Some Fiscal Implications of Monetary Policy.” When the Fed buys long-term Treasuries by issuing interest-bearing reserves, it effectively retires this long-term debt, at least temporarily, and replaces it with very short-term (overnight) debt reserves. Seen from this vantage point, the hyperinflation fears mentioned above appear misplaced: Why should a change in the maturity structure of the federal debt generate hyperinflation as long as the central bank continues to follow a Taylor-type rule for setting interest rates?

In our staff report “When Does a Central Bank’s Balance Sheet Require Fiscal Support?” we show that there is a potentially big difference between pre- and post-Great Recession central banking. We argue that a large, long-duration central bank balance sheet can, at least in principle, impair a central bank’s ability to control inflation if the fiscal authority (the Treasury) refuses to back under any circumstances the central bank’s balance sheet.

Our argument is very different from that dismissed at the beginning of this post. It rests on the observation that QE, almost by definition, resulted in a sizable maturity mismatch between the asset and the liability side of the central bank’s balance sheet. Many recent papers (for example, Hall and Reis; Carpenter et al.; Greenlaw, Hamilton, Hooper, and Mishkin; and Christensen, Lopez, and Rudebusch) have noted this mismatch, and have computed the implications of different interest rate renormalization paths for remittances from the central bank to the Treasury. Relative to these papers, we explicitly model the fact that seigniorage—revenues arising from currency creation—depends on the path of inflation and interest rates. We show that this endogeneity opens the door to the possibility of multiple equilibria in the absence of fiscal support.

Imagine that you are a Treasury investor and you know that the only resource the central bank can rely upon is seigniorage. You also know that the value of the central bank’s assets (long-term bonds) would fall below that of the bank’s interest-bearing liabilities (reserves, which are short-term) if high inflation and interest rates were to occur in the near future. Then you put two and two together and figure out that expectations of high inflation would actually force the central bank to rely on seigniorage, thereby validating such expectations. If you can convince your fellow investors that these expectations are to materialize, then your projection can become a self-fulfilling prophecy, reminiscent of second-generation currency crisis models.

Before we go any further, we should stress that this sort of self-fulfilling prophecy is unlikely to take hold in the United States for two reasons. First, we compute in our simulations that the expected present value of seigniorage for the central bank is very high, roughly the size of current U.S. GDP, under a most likely path for future interest rates. As a consequence, it would take very extreme expectations for interest rates to force the central bank to generate more seigniorage and validate the expectations. Moreover, there are reasons to believe that the assumption of no fiscal support under any circumstances is incorrect: if faced with the prospect of high inflation, the Treasury would eventually be willing to provide support to the central bank. Note that this support comes at no cost at all for the Treasury: simply being willing to provide it is enough to nip any hyperinflation in the bud.

What are the policy implications of all this? Certainly not that the central bank should not have engaged in QE. Much research has shown that QE successfully eased financial conditions, thereby promoting economic recovery. Rather, we argue that it would always be appropriate for a central bank to have access to, and be willing to ask for, support for its balance sheet by the fiscal authority. In other words, central bank independence does not mean that the central bank can control inflation regardless of the actions of the fiscal authority. As shown by history, it never has.


Christopher A. Sims is John F. Sherrerd ’52 University Professor of Economics at Princeton University.
Posted by Blog Author at 08:38:45 AM in Fiscal Policy, Macroecon, Monetary Policy

The institutionalization of moral hazard can be implemented in various forms but it basically represents the legalization of theft. Costs associated with risk must remain with the risk taker and should not be transferable to society at large. The distortions resulting from such high handed manipulations by central banks undermine not simply the financial system but society's confidence in the rule of law and trust in the country's leadership. Money functions not simply as means of payment but is a medium of information and its distortion results in loss of confidence and freedom. The inflation in the cpi, which is used to measure inflation, happened during the past 30 years in that the money supply (M3) was continuously growing at a higher rate than the economy. The aim to achieve a positive inflation rate of the cpi guaranteed by the Fed neglected the enormous productivity gains that would under normal circumstances have resulted in lower prices. The various bubbles in asset prices were a foreseeable consequence of this anchor-less monetary policy. Today the fight is on to avoid the deflation of these various bubbles and has little to do with causing inflation in the cpi but will increasingly destabilize the financial system with unknown consequences for society at large.