Crisis Chronicles: Railway Mania, the Hungry Forties, and the Commercial Crisis of 1847

Editor’s note: This post was updated on June 15 to clarify details regarding suspension of the Bank Act. 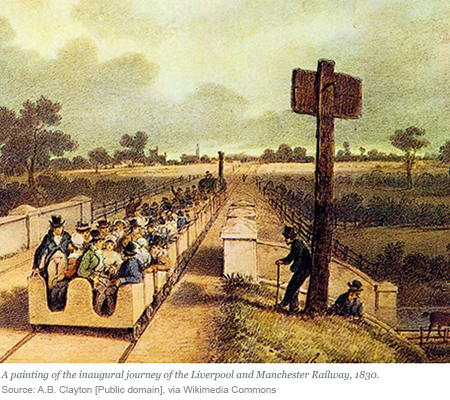 Money was plentiful in the United Kingdom in 1842, and with low yields on government bonds and railway shares paying handsome dividends, the desire to speculate spread—as one observer put it, “the contagion passed to all, and from the clerk to the capitalist the fever reigned uncontrollable and uncontrolled” (Francis’s History of the Bank of England). And so began railway mania. Just as that bubble began to burst, a massive harvest failure in England and Ireland led to surging food imports, which drained gold reserves from the Bank of England. Constrained by the Bank Charter Act, the Bank responded by tightening policy. When food prices fell in the spring of 1847 on the prospects for a successful harvest, commodity speculators were caught short and a crisis, one of the worst in British history (Bordo), ensued. In this edition of Crisis Chronicles, we cover the Commercial Crisis of 1847.

Railway Mania
British railway mania had a long fuse. The nation went through a lesser, “hypomanic” railway episode in the 1830s, but with the economy weak in the late 1830s and early 1840s, owing partly to the aftermath of the Panic of 1837, the spark did not catch. By 1843, however, the economy was recovering, interest rates were low, railroad construction costs were falling, and railway revenues were rising, thus setting the stage for a full-blown manic episode.

As is usually the case with technology booms, extravagant claims about the transformative powers of the new technology abounded: “Verily railways are the wonder of the world! Nothing during the last few years has created so marvelous a change as the great iron revolution of science” (Evans). Instead of “Internet speed,” as heard during the telecom bubble, the talk then was of “railroad speed.” The growing middle class in Britain, thanks to the industrial revolution, created a larger new cohort of eager investors wanting in on the action. With investors crowding, the number of railroad securities listed on the London exchange—and their prices—roughly tripled between 1843 and 1845 (see chart below). 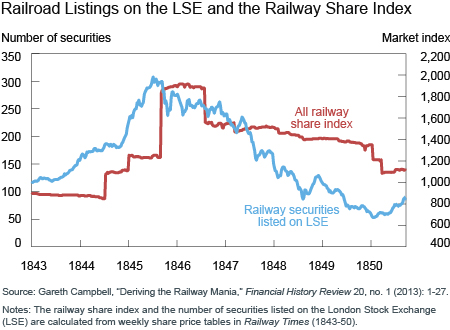 The rise in the number of listed shares reflected the relatively simple process for founding a railroad: form a committee comprising a few local dignitaries, register the company, advertise and raise money by selling subscriptions (scrips) for an initial 10 percent down (which added leverage to the boom), survey the route, and apply for Parliamentary approval. The remaining capital would be “called” later, once Parliament granted approval and construction began. As with the Canal Mania in 1793, the scrips traded freely even before a project was approved by Parliament, with some trading on dubious schemes that were never registered or were never intended for Parliamentary approval in the first place.

The mania, or “collective hallucination,” subsided in late 1845 as expectations seemed to turn, in part because of naysaying by the Economist (founded in 1843) and the London Times. On October 16 of that year, the Bank of England raised discount rates, and as credit tightened, railroad share prices began a long, steep decline, wiping out many fortunes along the way.

The Hungry Forties
With collapsing railroad prices as background, the proximate cause of the Commercial Crisis of 1847 was the shock to the agricultural sector and the subsequent financial and monetary fallout (Dornbusch and Frenkel). Both Ireland and England suffered massive harvest failures in 1846, which led to food shortages and drove up commodity prices. As food imports from the United States and elsewhere surged, the British trade deficit turned sharply more negative (doubling in absolute terms between 1845 and 1847) and gold bullion reserves drained from the Bank of England to finance food imports. In April, to hoard its dwindling reserves, the Bank raised the discount rate and severely limited the bills it would discount (lend against), causing, as C.N. Ward-Perkins (p.78) mildly put it, “much complaint in financial and commercial circles.”

Aggravating the tightening monetary conditions was a rash of failures of “commercial” firms occasioned by failed speculative plays (via derivatives!) in foodstuffs, particularly corn. With the failed 1846 harvest as prologue, many merchant houses bought corn and other foodstuffs forward, expecting higher prices in the future. By the time these contracts matured in mid-1847, prospects for a strong harvest that summer caused spot prices to fall sharply, catching many speculators short. Further, the Bank of England raised rates again in August, and the confluence of falling prices and higher rates led to widespread financial panic that brought down more than fifty corn merchants in August and September, along with many of the commercial firms that funded their positions. The deflating railway bubble, which bankrupted many enterprises and raised doubts about the stability of the financial system, set the stage for the panic (Dornbusch and Frenkel).

The Bank Charter Act and the Week of Terror
The Bank of England’s ability to contain the crisis as a lender of last resort was severely constrained by the Bank Charter Act of 1844 (Humphrey and Keleher). The Act gave the Bank of England a monopoly on new note (essentially money) issuance but required that all new notes be backed by gold or government debt. The intent, per Currency School doctrine, was to prevent financial crises and inflation by inhibiting currency creation. Adherents recognized that the Act might also limit the central bank’s discretion to manage crises, but they argued that limiting currency creation would prevent financial crises in the first place, thus obviating the need for a lender of last resort. But, of course, not all crises originate in the financial sector. In the case of the Commercial Crisis, the perverse effect of the Act was to cause the Bank to tighten monetary conditions in both April and October as gold reserves drained from the Bank (Dornbusch and Frenkel). In July, a coalition of merchants, bankers, and traders issued a letter against the Bank Charter Act, blaming it for “an extent of monetary pressure, such as is without precedent” (Gregory 1929, quoted in Dornbusch and Frenkel).

The panic culminated in a “Week of Terror,” October 17-23, with multiple banks failing or suspending payments to depositors in the midst of runs. The Royal Bank of Liverpool shuttered its doors on Tuesday, followed by three other banks, and by the end of the week the Bank of England held less than two million pounds in reserve, down from eight million in January. Systemic collapse seemed imminent. On Saturday of that week, London bankers petitioned the prime minister to suspend the Bank Act, and by midday Monday, the Bank of England had received a letter from the prime minister and the chancellor of the exchequer authorizing the Bank to issue new notes without gold backing and to “enlarge the amount of their discounts and advances upon approved security,” effectively suspending the Bank Act. The ability to expand fiat note issuance increased liquidity and helped the Bank restore confidence, and the high discount rate the Bank was charging attracted gold reserves back to its vaults (hence the maxim “seven percent will draw gold from the moon”). By December, interest rates were down substantially from their panic levels.

Lessons for Modern Times?
In contrast to the Bank of England in 1847, the Federal Reserve during the Panic of 2007-2008 was authorized to act as lender of last resort, and, in fact, the Fed acted aggressively to provide liquidity to the financial system in unprecedented ways. Through a variety of newly created facilities, the Fed expanded the types of institutions it would lend to, including nonbanks, and the types of collateral it would lend against, including asset-backed securities.

While some observers have praised the Fed’s actions, others, including some within the Fed, have been more critical. Partly in response to such criticism, the Dodd-Frank Act limits the Fed’s ability to lend to individual firms, as the Fed did during the panic, and a more recently proposed bill would further constrain the Fed’s emergency lending discretion. Will these reforms curb the moral hazard (excess risk-taking) that last-resort lending might invite? Might they aggravate future crises by curbing the Fed’s discretion as lender of last resort? Let us know what you think.

Posted by Blog Author at 07:00:00 AM in Crisis Chronicles , Lender of Last Resort

With the Peel Act of 1844 the BofE claimed full seigniorage on banknotes printing thus precipitating the banking crisis. We can expect soon a "PEEL ACT 2.0" where central banks like BofE and ECB will claim full seigniorage on electronic money creation currently demanded to commercial banks. The big problem is the central banks accounting for "fake" liabilities on money issuance that prevent the sovereign to reclaim for himself the connected seigniorage. Furthermore - by not following IAS-IFRS accounting rules through the trick of exemption from client rules - the central bank is creating a very big dark pool of electronic money unaccounted for - as an asset for the bank - at the time of creation.

Those interested in issues raised here toward the end of the article (who, if anyone, is responsible for validating asset valuations assigned by bankers and securities firms seeking bailout assistance) should read up on the Reconstruction Finance Corporation (RFC) of the 1930s, which was created specifically to address that question. Initially, the Federal Reserve believed that it had or should have a role in extending direct credit to banks (for their capital structures) and other industries, The first chairman of the RFC also was the chairman of what is now the Fed's Board of Governors, Eugene Meyer. Eventually, Meyer and his staff came to understand that the two functions (liquidity support, the function of the Fed, and solvency or capital support, the assigned function of the RFC) were separable and should be separated. In fact, the RFC's authorizing statute prohibited the Fed from funding it by purchasing its securities as part of open-market operations. Congress and the Treasury always would like some deus ex machina (a.k.a., the Fed) to descend from the heavens and resolve nasty and politically charged solvency support/capital replacement/validation of asset valuation matters. But I think the position of the Richmond Fed on this is correct: That's fiscal policy, which has to be hammered out between Treasury and Congress using appropriated funds, not a monetary policy matter to be resolved by the Fed using newly created money.--Walker Todd

Based upon the narration I would have to conclude that the issuance of money is not a moral act and the economic system whereby central banks regulate the currency cannot ultimately be governed by any artifice such as morality. Morality is a difficult concept.

Great article! Waiting for a piece on the plank road bubble in the US around the same time. You can still ride on one (paved now): Patterson Plank Road in New Jersey.