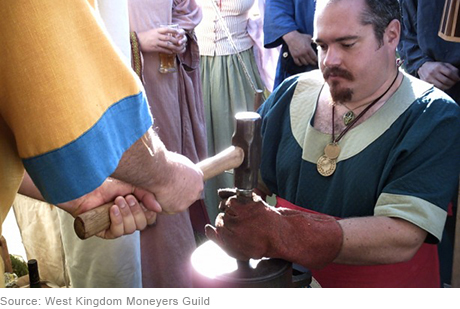 A segment of this organization focuses on medieval times, and a subgroup of it concentrates on the minting of coins as it was accomplished during this time period. A posting by His Lordship Ian Cnulle to a website for a cooperative community provides some background on the processes involved in minting during the history of the society.  After Lord Cnulle describes the early attempts at, and high rate of failure of, minting coins within the IKMG (Interkingdom Moniers’ Guild), he goes on to explain how the minting of coins fits into the activities of the Society:

The IKMG and its affiliates exist to promote production and use of period style coins by period style methods. We mint coins on site at events as a demo for the populace and as training for members. Members teach classes at guild fairs and in conjunction with SCA educational institutions (e.g., the University of St. Hildegard and An Tir’s University of Ithra). We can provide some assistance to any SCA moneyers in the form of some tools and materials, more or less at cost.

Far more ambitious and consequently less common, are attempt[s] to circulate “general function tokens,” i.e., something like “real money” that can be used for any transactions on site. William Arbuthnot’s repros sold and used at Pennsic were an informal example. The brass “tygers” of the Kingdom of the East were a kingdom level attempt.

In the post, Lord Cnulle describes a self-published book by Emmerich of Vakkerfjell, The Moneyers Handbook, as “an introductory how-to manual based on many years of practical experience in large scale (by SCA standards) production by many people” and “written in an accessible, conversation style” so that “a person with no prior experience should be able to produce a reasonably authentic looking Anglo-Saxon style penny in pewter.” The book itself is somewhat difficult to come by, but there are excerpts from a draft of a second edition (by Lord Cnulle) that has been posted. (There is both beauty and humor in the details.)

In a discussion of safety issues when using nothing but the old technology (including lots of tips about conquering your fears of getting your fingers smashed), the writer embraces one of the goals of historical recreation:

The whole point of the pre-industrial attitude toward work is that it is NOT a disregard for safety, but rather a different means of safety. You have to rely on focusing your attention on the work instead of depending on a mechanical device to eliminate the need to pay attention. Working safely with pre-industrial technology requires learning a different mindset to avoid injury – but isn’t that the purpose of our historical re-creation? We’re not just creating props for an image of medieval life, but trying to experience life as they did.

About one third of the way into this text is an interesting table of coin dimensions that compares the diameter and thickness of present day U.S. coins to those of a medieval “broad” penny, half groat, groat and shilling, with some accompanying text that warns not to create coins that are too close in dimension to today’s coins (even if you don’t actually try to use them in vending machines).

If you are wondering: well, how do they make those coins, anyway? Here is the briefest outline from the draft for the second edition:

There are four steps in the process of creating a coin:
1. Make punch tools and prepare the die blanks
2. Lay out the designs and sink them on the dies
3. Make the coin blanks
4. Strike the coin

See photos of members of the West Kingdom Moneyers Guild (a group within the SCA), some of which depict coin hammering, and watch a video of a moneyer striking coins.