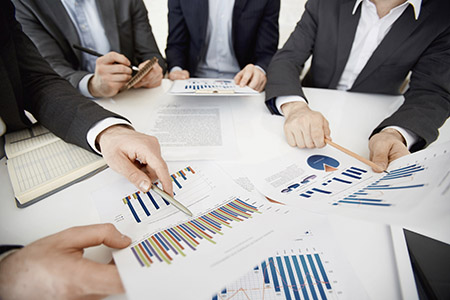 Start of a Cycle
At the beginning of the FOMC cycle, the staff’s policy work centers on the production of what we call the Whitebook. This internal document presents a number of hypotheses regarding the developments that, in the view of Bank staff, will help determine the medium-term economic and policy outlook. These hypotheses are meant to inform the policy process over several FOMC cycles and guide the staff in choosing the themes and topics of the briefings they present to the Bank president during those cycles (described further below). For example, a prominent hypothesis in recent Whitebooks concerns the staff’s view on the level of the equilibrium real short-term interest rate, its anticipated dynamics over the medium term, and the factors contributing to its changes over time.

The set of hypotheses from the previous Whitebook as well as possible revisions, amendments, and deletions are discussed early in the cycle at a meeting of staff economists and staff members from the Markets and IPA Groups. On the basis of this discussion, the Whitebook is revised for the new FOMC cycle. At this same meeting, participants identify particular themes and briefing topics for the cycle and their relationship to the Whitebook hypotheses.

Research staff present the Whitebook as well as the cycle themes at a meeting with the Bank president in which the debate at the just-concluded FOMC meeting in Washington is also discussed. Subsequently, the Whitebook may be revised to incorporate the information derived from that debriefing and the feedback from the president.

Because the Whitebook hypotheses play a central role in our policy process, the Research staff periodically undertake a thorough evaluation of them, assessing the evidence regarding each hypothesis based on staff analysis, staff presentations, and publicly available analysis.

Middle of a Cycle
Once the Whitebook is completed for the ongoing FOMC cycle, the policy process is primarily focused on periodic briefings of the Bank president and senior Bank management.

The first part of a typical briefing is a recap of recent economic and financial market developments, which is much in the spirit of the U.S. Economy in a Snapshot that we post on our website monthly. The briefing also covers the impact these developments may have had on the staff “judgmental” forecast of U.S. GDP growth, inflation, and unemployment. (Our most recent public release of that forecast appears in a May 16 post in Liberty Street Economics.)

The remainder of the briefing typically consists of two to three special-topic presentations that are generally based on the FOMC cycle themes identified during the Whitebook process. Many of the presentations are offshoots of staff economists’ research—research that eventually appears in economists’ publications in major academic journals. (For examples of this research, see the citations at the end of this post.) In addition, a number of these presentations become posts in this blog; for example, see the posts from July 2, June 24, July 13, and June 8 of this year.

In addition to participating in briefings at this stage of the FOMC cycle, members of the Research staff also contribute to the preparation of the Survey of Primary Dealers and the Survey of Market Participants—surveys that provide the FOMC with important information about market participants’ views on monetary policy, financial market developments, and the economic outlook. Although the primary responsibility for these surveys resides with the Markets Group, Research Group economists help formulate some questions as well as analyze survey responses.

End of a Cycle
The policy advice process at the New York Fed culminates in the week before the FOMC meeting. The staff’s primary product during this period is the Blackbook. This document, which represents our main pre-FOMC briefing document to the Bank president, includes the Research staff’s policy recommendation for the coming FOMC meeting. To support that recommendation, the Blackbook also includes a review of the staff outlook and judgmental forecast as well as the staff’s assessment of the risks facing the U.S. economy.

Staff members in IPA, Research, and Markets produce and distribute a second document during the last week of the cycle that focuses on global economic and financial developments and provides an outlook on economies outside of the United States. This foreign outlook in turn influences the U.S. outlook that is presented in the Blackbook.

During this pre-FOMC week, two staff briefings for the Bank president are held in preparation for the FOMC meeting. These briefings typically include some discussion of the Blackbook, the Tealbook (the FOMC document that presents the Board staff’s forecast and contains discussion of economic and financial developments and of model simulations), and memos to FOMC participants that may have been prepared by staff at the Board or elsewhere in the Federal Reserve System. In addition, the briefings may feature special-topic presentations that emphasize policy issues.

For the cycles in which FOMC participants submit their forecasts for the Summary of Economic Projections (SEP), the staff also provide their views on the submission based on the staff forecast and risk assessment. The Bank president uses this information from the staff as one of the inputs to his submission for the SEP.

This overview of the New York Fed advisory process is designed to give readers a clearer picture of the intensive preparations for an FOMC meeting. Because the meetings and the policy decisions that arise from them are so important, management in Research regularly evaluates the advisory process to ensure that it continues to provide the best possible analysis and counsel.

Examples of the Research behind Economists’ FOMC Presentations

Lucca and Moench. “The Pre-FOMC Announcement Drift.” Journal of Finance.

Brown, Stein, and Zafar. “The Impact of Housing Markets on Consumer Debt: Credit Report Evidence from 1999 to 2012.” Journal of Money, Credit, and Banking.

Jonathan McCarthy is a vice president in the Bank’s Research and Statistics Group.

Paolo Pesenti is a senior vice president in the Research and Statistics Group.