Inflation dynamics are often described by some form of the Phillips curve. Named after A. W. Phillips, the British economist whose study of U.K. wage and unemployment data laid the groundwork, the Phillips curve denotes an inverse relationship between inflation and some measure of economic slack. A much-discussed issue in the literature is how forward-looking this relationship is. In this post, we address this question using a flexible version of the New Keynesian Phillips curve (NKPC) to illustrate the key role that expectations play in inflation dynamics.

The NKPC is derived from a price-setting model with nominal rigidities. In its most common formulation, inflation depends on one-period-ahead inflation expectations and on current marginal costs of production. Variants of the NKPC include some dependence on past inflation to account for the persistence observed in the data, and are often expressed as relationships between inflation and familiar measures of the output gap, using theoretical assumptions to model how marginal costs relate to the output gap. An NKPC can be found in most dynamic stochastic general equilibrium (DSGE) models used for policy analysis. One example is the FRBNY DSGE model discussed in a Liberty Street Economics series last year.

This post presents a more flexible version of the NKPC (developed in this 2008 article from the American Economic Review) that further emphasizes the role of expectations. Specifically, this version allows the underlying rate of trend inflation to vary over time to capture the evolution of the U.S. monetary policy regime from very high inflation in the 1970s to more stable inflation since the mid-1980s. The resulting NKPC links the dynamics of inflation to the dynamics of real marginal costs as in standard formulations, but differs in two respects. First, it has a stronger forward-looking component because it includes inflation expectations multiple periods into the future, as well as expectations of output growth and the discount factor. Second, its coefficients are allowed to shift over time with changes in trend inflation.

To estimate this NKPC model, we assume that the dynamics of the variables involved in the NKPC can be described by a multivariate autoregressive model (VAR) with time-varying parameters. From the estimated VAR we obtain estimates of underlying trends, with trend inflation defined as the level inflation is expected to settle at once short-run fluctuations die out. The difference between inflation and its trend captures cyclical variations in inflation—the “inflation gap.” We then estimate the NKPC coefficients—in particular the NKPC “slope,” which measures the inflation-real activity trade-off—by choosing the underlying parameters such that the model-implied projections track those of the VAR model. This procedure allows us to interpret the inflation gap projections obtained from the VAR in terms of components of the NKPC. We can thus answer the question posed in the title of this post: How much do inflation expectations matter for inflation dynamics?

Our VAR model includes measures of inflation, labor share, output growth, and the discount rate for the period 1960:Q3 to 2015:Q2. The first three variables are for the nonfarm business sector. The labor share—the ratio of real wages to labor productivity—is a proxy for real marginal costs, since unit labor costs are proportional to marginal costs in the model.

The chart below shows the inflation series (red line), its average over the sample period (dashed line), and the median estimate of trend inflation at each date (blue line). Trend inflation rises from roughly 2.5 percent (annualized) at the beginning of the sample to slightly above 5.0 percent in the mid-1970s, and declines thereafter to about 1.5 percent in the early 2000s. Since then, it has remained stable in the 1.6 percent to 1.8 percent range. The gap between inflation and its trend shows little persistence, especially since the Great Moderation period. 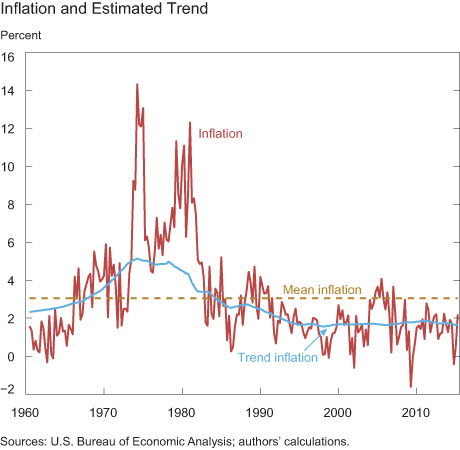 The next chart shows the labor share and its trend, estimated with the same methodology. 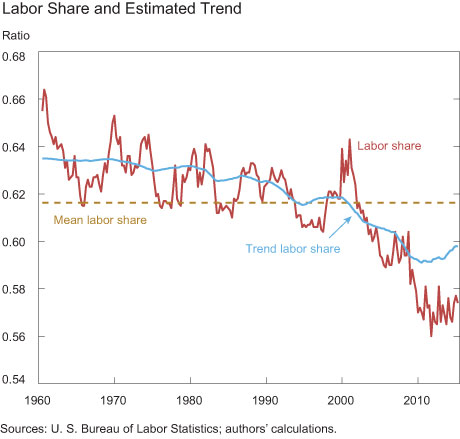 As the chart makes clear, the labor share starts dropping in the 1980s, and then declines more markedly after the early 2000s. A negative gap in the labor share—that is, a drop in the labor share below the estimated trend—provides a measure of slack in the economy, a measure that is arguably a better gauge of inflationary pressures than output gap measures (see this 1999 article from the Journal of Monetary Economics and this 2002 article from the same publication.) The labor share gap appears relatively stable until the onset of the Great Recession, when the sharp fall below trend opens a large negative gap. 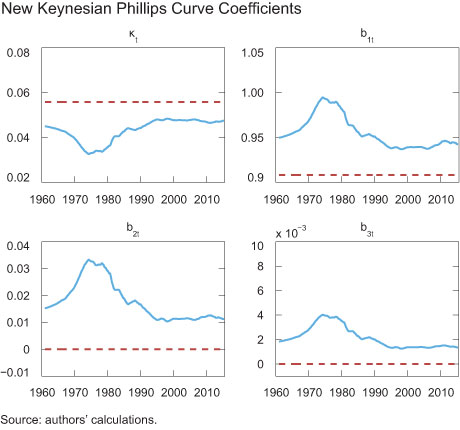 A notable feature of these estimates is that the NKPC curve is flatter (kt is lower) and more forward-looking (the bt coefficients are higher) during periods of higher trend inflation. This is intuitive. When prices are sticky, the cost of not resetting prices rises with trend inflation and this pushes firms to be more forward-looking when setting their prices. Thus, inflation is less sensitive to current economic conditions and more sensitive to expected future gaps. But how much more do future conditions matter than current conditions?

The chart below provides an answer. It decomposes short-run fluctuations in inflation, measured as deviations from the estimated trend (solid red line), into a current component (blue bars) and an expected component (gold bars). 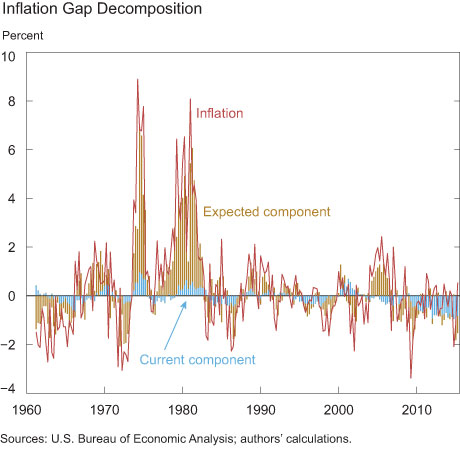 The forward-looking component overwhelmingly dominates the current component for most of the sample, with expectations explaining the largest part of the negative inflation gap of the late 1960s and early 1970s, as well as the positive spikes of the Great Inflation period. These results suggest that inflation expectations were no
t well anchored in the late 1960s and 1970s, as small contemporaneous gaps were associated with large movements in the expectations component in the same direction. Since the early 1980s, the expectations component has become much more anchored. Indeed, a major finding of this analysis is that inflation expectations have remained stable since 2007, even when the current component fell significantly with the decline of the labor share below trend.

Argia M. Sbordone is a vice president in the Federal Reserve Bank of New York’s Research and Statistics Group.