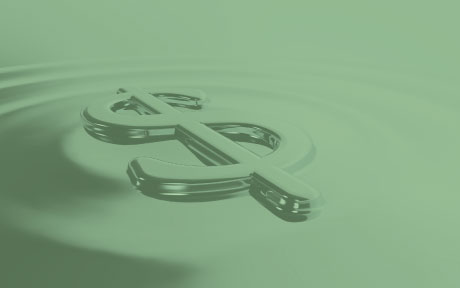 Sixth in a six-part series

Market efficiency is often pointed to as a main benefit of automated and high-frequency trading (HFT) in U.S. Treasury markets. Fresh information arriving in the market place is reflected in prices almost instantaneously, ensuring that market makers can maintain tight spreads and that consistent pricing of closely related assets generally prevails. While the positive developments in market functioning due to HFT have been widely acknowledged, we argue that the (price) efficiency gain comes at the cost of making the real-time assessment of market liquidity across multiple venues more difficult. This situation, which we term the liquidity mirage, arises because market participants respond not only to news about fundamentals but also market activity itself. This can lead to order placement and execution in one market affecting liquidity provision across related markets almost instantly. The modern market structure therefore implicitly involves a trade-off between increased price efficiency and heightened uncertainty about the overall available liquidity in the market.

To illustrate this trade-off, we consider the trading activity in the ten-year U.S. Treasury note and futures in the month of October 2014 during which the October 15 “flash rally” occurred. Trading in the cash market takes place on the BrokerTec and eSpeed interdealer platforms (both located in Secaucus, New Jersey), while the corresponding front-month U.S. Treasury futures contract trades on the Chicago Mercantile Exchange (CME). All three venues feature anonymous electronic central limit order books with trading largely dominated by principal trading firms and bank dealers that often employ automated and low-latency trading techniques, as documented in the recently released Joint Staff Report on October 15, 2014.

To an investor in the U.S. Treasury market, the eSpeed, BrokerTec, and CME platforms represent distinct liquidity pools which typically exhibit tight spreads and significant depth at the top of the order book. Thanks to low-latency cross-market trading activity, the prices on all three platforms are likely to be competitive (market efficiency at work!). However, the liquidity effectively available to the investor at any point in time is highly unlikely to be the sum of top-of-book depths across the platforms. To see why, consider a New York-based investor submitting a buy order to all three venues. Given the short distance to the interdealer platforms, the investor’s orders will reach one of them first. Suppose the BrokerTec order is matched first and the trader gets the requested quantity at the best offer. As soon as the BrokerTec transaction is observed in the market data feed, colocated low-latency market participants may immediately seek to cancel top-of-book offers on eSpeed and CME or submit competing buy orders to eSpeed and CME, a chain of events also described in a recent Risk.net interview (subscription required) with market participants.

The former would be consistent with prudent risk management by market makers while the latter would be an example of opportunistic trading ahead of anticipated order flow. Due to random fluctuations in network latency and the close proximity between eSpeed and BrokerTec, the investor’s order may or may not arrive in time to get filled at the expected best offer on eSpeed. However, low-latency traders will almost certainly be able to preempt the order’s arrival at CME, leaving it in a position where it may not be filled at all. Hence, the displayed market depth across distinct liquidity pools can convey a misleading impression of the aggregate available liquidity.


Causes of the Liquidity Mirage–Prudent Market Making
To investigate how low-latency liquidity providers respond to incoming market data, we study the order book reactions to trades across platforms based on cash market data from BrokerTec and CME futures market data from Nanotick. We focus our analysis on the extent to which CME trades may cause a reduction in depth on BrokerTec, as captured by the cross-market trading activity measure introduced in our August blog post. In this case, the measure can be interpreted as the proportion of CME trades associated with top-of-book depth reduction on BrokerTec in excess of what might be expected by pure chance.

The charts below show that on average as much as 20 percent of Treasury futures trades at the bid (offer) are associated with depth reduction at the bid (offer) on the BrokerTec platform. Moreover, this BrokerTec order book reaction to CME trades peaks at a roughly 5 millisecond delay, which matches the current shortest possible transmission time between the two venues using cutting-edge microwave transmission technology. The evidence therefore supports the hypothesis that rapid depth reduction by low-latency liquidity providers contributes to the liquidity mirage. It is also worth highlighting that October 15, while exhibiting extreme price volatility, is not an outlier in this regard. As such, we did not find any evidence that the liquidity mirage was more pronounced on October 15 compared with our control days. 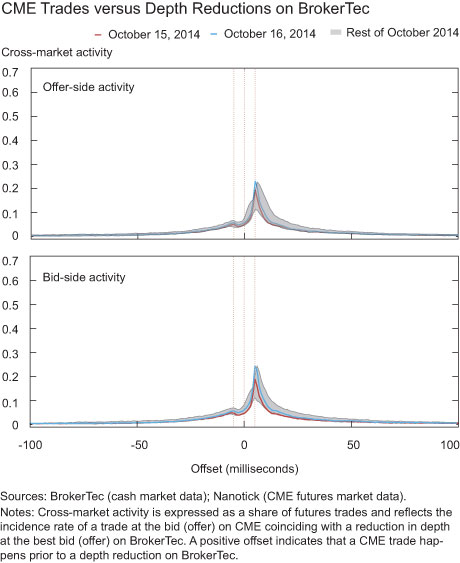 An even stronger link exists between large CME trades (those with a trade size greater than fifty contracts) and top-of-book depth changes on BrokerTec. The chart below displays a remarkable spike indicating that nearly 60 percent of large CME trades are followed by BrokerTec depth reductions with an offset of 5 milliseconds. These findings underscore the fact that the total liquidity available to an investor at a given point in time in practice may tend to be closer to the depth of the market that gets accessed first rather than the sum of the depths in each market. 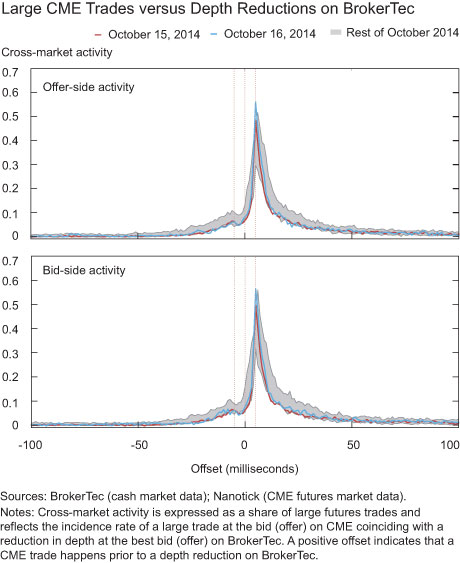 We stress that the patterns displayed above are entirely consistent with prudent market making in an anonymous central limit order book environment where the informational advantage of market makers does not lie in having proprietary access to customer flows (as New York Stock Exchange specialists once did), but rather in their speed and ability to process complex market data.


Causes of the Liquidity Mirage–Opportunistic Trading
A second potential cause for the liquidity mirage is that traders with a speed advantage may attempt to trade ahead of (expected) incoming order flow. In this scenario, they would react to buy (sell) orders at CME by immediately submitting buy (sell) orders on BrokerTec in anticipation that prices may tick up (down) due to incoming order flow. However, the evidence for this behavior turns out to be quite weak in the data, based on our cross-market activity measure.

The charts below show the cross-market activity measure for buy and sell trades on CME and BrokerTec. There is modest evidence that buy (sell) trades take place in a coordinated fashion at an offset of +/-5 milliseconds, but this accounts for very little of the overall trading activity on the BrokerTec platform (the less active of the two markets). For large orders (not shown here), the evidence is even weaker. 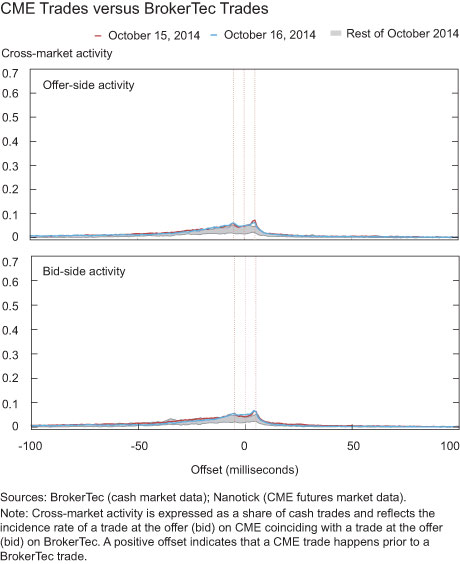 Summary
While low-latency cross-market trading has undoubtedly led to more consistent pricing of Treasury securities and derivatives, there is strong evidence that it has also resulted in a more complex and dynamic nature of market liquidity. Under the new market structure, it has arguably become more challenging for large investors to accurately assess available liquidity based on displayed market depth across venues. The striking cross-market patterns in trading and order book changes suggest that quote modifications/cancellations by high-frequency market makers rather than preemptive aggressive trading are an important contributing factor to the liquidity mirage phenomenon.


Dobrislav Dobrev is an economist at the Board of Governors of the Federal Reserve System.

Ernst Schaumburg is an assistant vice president in the Federal Reserve Bank of New York’s Integrated Policy Analysis Group.
Posted by Blog Author at 07:00:00 AM in Financial Markets, Liquidity

Craig, Thank you for your feedback. We are looking into this issue.

Would you people please fix the print friendly functionality? Only one page prints. It's not that hard.

Traders and market operators have also reported concerns about the work-up protocol (which allows an order to be frozen while its size is negotiated) as contributing to 'phantom liquidity'.

Using a trade that takes an uncertain time period to execute is used to confound HFT firms in the equity market by the exchange IEX, however in this instance the time period can be fixed by the trader allowing it to freeze an order while checking across other markets to take advantage of the quoted price, or even to synchronise trade execution timings by ending negotiations in multiple trades simultaneously, which could be used to trigger a sudden movement in price.