« Changes in the Returns to Market Making | Main | The Liquidity Mirage »

Fifth in a six-part series

The chart below shows that mutual funds now own more than 20 percent of outstanding corporate bonds, up from only 4 percent in 1990. The surge in mutual fund ownership has been particularly rapid since 2010, just after the end of the global financial crisis. 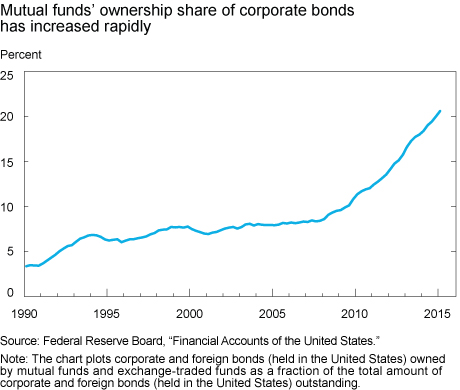 Mutual funds’ increased role in the corporate bond market has raised concerns about redemption risk. When mutual funds are subject to large redemptions, they can be forced to sell some of their holdings, which can cause price declines, especially for relatively illiquid bonds. Adverse pricing conditions in secondary markets can in turn lead to a deterioration of primary markets. Redemption risk is reinforced when redemptions are correlated across funds.

Despite such concerns, redemption risk in bond mutual funds does not appear to have increased. The chart below plots net bond fund flows (fund share purchases minus fund share redemptions) as a fraction of corporate bonds outstanding. While net flows were very negative at the height of the financial crisis (2008:Q4), the volatility of the flows does not seem to be increasing over time. 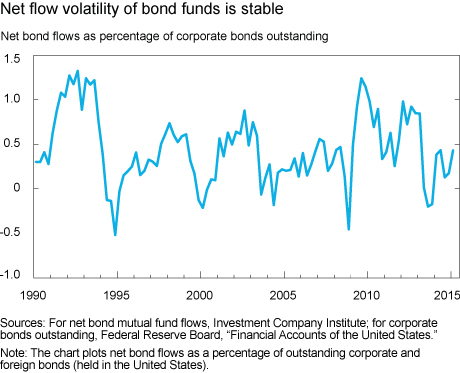 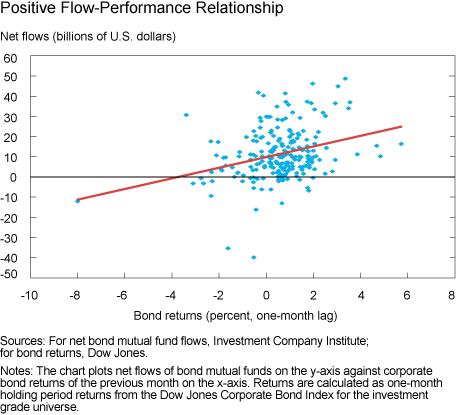 The flow-performance relationship for equity market mutual funds is generally found to be convex: strong positive performance tends to generate an increasingly strong response of flows (see Chevalier and Ellison 1997). In contrast, for bond funds, Goldstein, Jiang, and Ng 2015 find a concave relationship, so that flows react more strongly to returns when returns are low. The concavity is more pronounced for illiquid bonds, and is stronger when market returns are negative. Moreover, the flow-performance relationship for bond funds is both statistically and economically larger than that for equity funds. These results suggest that the illiquidity of corporate bonds may generate incentives to sell quickly in response to bad news, which might amplify adverse price changes. These incentives might also give rise to self-reinforcing redemption dynamics as investors might anticipate that it pays to redeem early. In equilibrium, redemption risk might lead to higher secondary market volatility and more costly corporate bond intermediation.

The Declining Role of Dealers

By dealers, we refer to the security brokers and dealers that make markets in corporate bonds and other securities that trade over the counter. Dealers trade securities on behalf of their customers and for their own account, and use their balance sheets primarily for trading. They play a potentially important role in corporate bond and other markets as they can absorb sales by mutual funds, absorbing temporary supply-demand imbalances and thus potentially stabilizing prices.

In contrast to the increasing share of corporate bond ownership by mutual funds, the share of corporate bond ownership by dealers has declined in recent years. Dealers’ ownership share averaged 2.6 percent from 1990 to 2009, but fell to an average of just 1.3 percent from 2010 to present. The declining share raises the concern that dealers may no longer be able to absorb selling pressure when redemptions force mutual funds to sell. 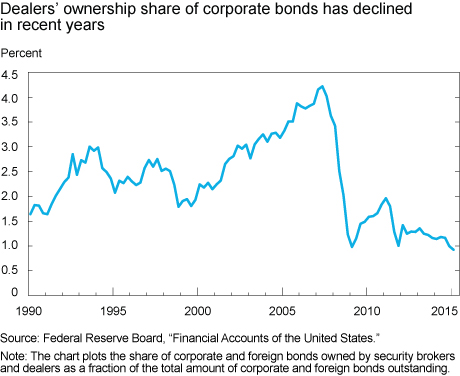 In order to gauge whether dealers are buying when bond funds are selling, or vice-versa, we regress bond fund flows on past returns and the change in dealer corporate bond positions. The sign (plus or minus) and statistical significances of the regression results are reported in the table below. 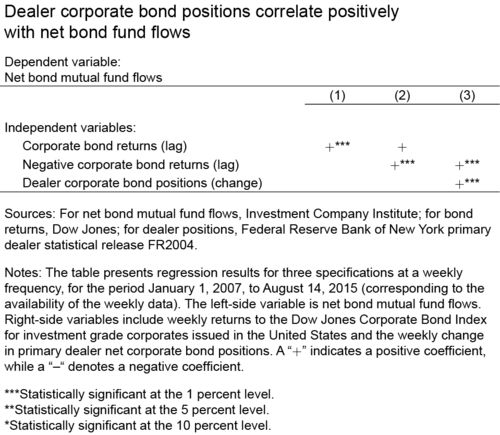 The key insight comes from specification (3), which shows that dealer positioning tends to evolve in the same direction as bond mutual fund flows, suggesting that dealers aren’t absorbing the aggregate selling pressure of bond mutual funds. In unreported regressions, we do not find any evidence of nonlinearity in the relationship between dealer positioning and bond mutual fund flows. Hence we conclude that the falling ownership share of dealers in the corporate bond market is unlikely to exacerbate redemption risk.

Mutual funds’ share of corporate bond ownership has increased sharply in recent years, while dealers’ share has declined substantially. Because mutual funds are subject to redemption risk, this shift in ownership patterns raises the concern that redemption risk might have increased. However, we find no evidence that the net flow volatility of bond funds has increased. Likewise, we uncover no evidence of contrarian behavior by dealers relative to bond fund flows. Therefore, even if we do observe large mutual fund redemptions in the future, our evidence does not suggest that reduced dealer positions will exacerbate the effects on corporate bond pricing and liquidity.

Tobias Adrian is the associate director of research and a senior vice president in the Federal Reserve Bank of New York’s Research and Statistics Group.”

Or Shachar
is an economist in the Bank’s Research and Statistics Group.