Differences in Rent Inflation by Cost of Housing

Update (12.9.15): We revised the chart package linked to in the second paragraph of this post to correct a spreadsheet error. A new note also clarifies our methodology. Please see the addendum below. 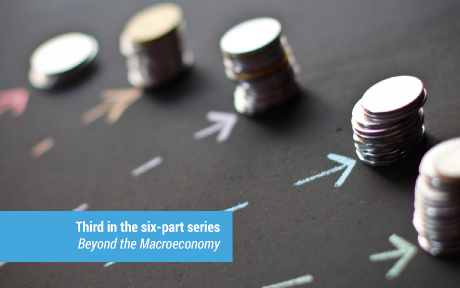 We know that different people experience different inflation rates because the bundle of goods and services that they consume is different from that of the "typical" household. This phenomenon is discussed in this publication from the Bureau of Labor Statistics (BLS), and this article from the New York Fed. But did you know that there are substantial differences in inflation experience depending on the level of one's housing costs? In this post, which is based upon our updated staff report on “The Measurement of Rent Inflation,” we present evidence that price changes for rent, which comprises a large share of consumer spending, can vary considerably across households. In particular, we show that rent inflation is consistently higher for lower-cost housing units than it is for higher-cost units. Note that since owners' equivalent rent inflation is estimated from observed changes in rent of rental units, this finding applies to homeowners as well. While we cannot be certain about why this is the case, it appears to be at least partly related to how additional units are supplied to the housing market: in higher-price segments additional units primarily come from new construction, while most of the increase in lower-price segments comes from units that previously were occupied by higher-income households.

In our staff report, we derive estimates of tenant rent inflation and owners’ equivalent rent inflation using data from the American Housing Survey (AHS) national sample for years 1989 through 2013 (this survey is conducted in odd numbered years). We follow the BLS methodology as closely as possible for estimating these two inflation rates. While our estimates are on average somewhat higher than those published by the BLS, the differences generally are not statistically significant (see Table 4 in the chart package of our staff report). 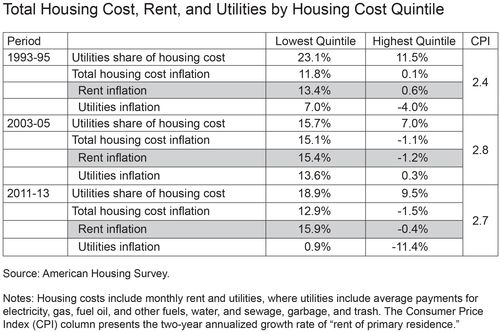 The second possibility we examine is the sources of new housing supply across the housing cost distribution. To do this, we divide the 1989 AHS sample into quintiles based on the reported household income associated with each housing unit (quintile 1 is the lowest-income quintile, while 5 is the highest). We use income rather than housing cost because in the AHS owner-occupied housing units are not assigned a housing cost that is conceptually equivalent to that which is assigned to rental units. We then go to the 1991 AHS sample and divide it into income quintiles based on 1991 income deflated (using the personal consumption expenditures deflator) to 1989 dollars. We then determine the change in the number of occupied units over 1989-91 and the sources of that change: those sources include new construction, filtering from one income quintile to another, and what we call net conversions of units to or from residential usage [this includes units lost in situations like demolition or fire and units gained by conversion from nonresidential uses or by subdividing a single unit]. We then repeat the exercise for 1991 to 1993, and so on, and compute a running total of the change in units by source for each income quintile.

In determining whether a unit has filtered into a different income quintile, we impose the following requirement: If there is a change in the household income associated with a unit that is sufficient to place it in a different income quintile from that of the base year, the occupants in the second year of the panel must have moved into the unit after the survey date of the base year. With this requirement, we rule out from our definition of filtering income shocks for a given household due to events such as changing to a better job, retirement, or the loss of an earner in cases such as death, divorce, or illness. 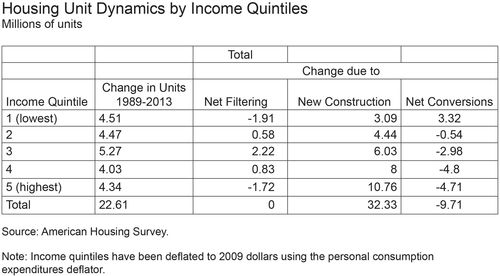 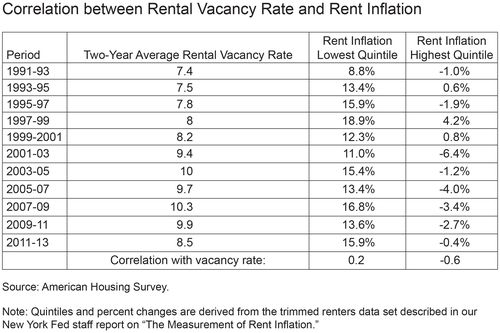 Putting these various threads together, it appears that the inverse relationship between prior rent levels and rent inflation may be related to a greater concentration of new residential construction in the higher rent level segments of the housing market, dampening the price response to a tightening in that market.  As one moves down the rent level distribution, increases in the supply of housing increasingly come from previously higher-rent units, which may still have rents above the average of the incumbent units, pushing up rents more in such segments.

One interesting question is how various public policies designed to influence the level of housing costs affect the growth of that cost over time. We hope to explore this issue in future work.


Addendum
Our analysis of rent inflation is based on data panels that span three American Housing Surveys (AHS). For example, to estimate rent inflation over the years 2011 to 2013, we confine our analysis to rental units for which we have complete observations from the 2009, 2011, and 2013 surveys. In our model, housing cost change from 2011 to 2013 is regressed on the log level of housing cost in 2009 plus several variables pertaining to the location and physical characteristics of the unit. In the tables in which we present information by housing cost quintiles, the quintiles are based on housing cost levels of 2009.

Our finding that housing cost inflation is inversely related to the level of housing cost holds in each panel. However, that result does not necessarily hold when comparing rent levels across panels, particularly as the time span between panels increases. This fact does not negate our finding as each panel is a separate sample. The greater the time span between panels, the greater the likelihood that the sample of rental units analyzed has changed.

Jonathan McCarthy is a vice president in the Federal Reserve Bank of New York's Research and Statistics Group.

Richard Peach is a senior vice president in the Bank's Research and Statistics Group.
Posted by Blog Author at 02:30:00 PM in Housing, Inflation, Macroecon

We have reconfirmed the main finding of our underlying Staff Report—that rent inflation is inversely related to rent level. However, Table 6 of the Staff Report lists data that are inconsistent with that finding. We are now reexamining the code used to create Table 6 and should be able to resolve the issue and make corrections soon.

Is there a timetable for when this article will be updated to account for the spreadsheet error?