Who is Driving the Recent Decline in Consumer Inflation Expectations?

Correction: In the right panel of the chart, “Mean Probability of Deflation in the SCE,” we have corrected the labels for the group earning less than $75k, which were initially transposed. We regret the error.

The expectations of U.S. consumers about inflation have declined to record lows over the past several months. That is the finding of two leading surveys, the Federal Reserve Bank of New York’s Survey of Consumer Expectations (SCE) and the University of Michigan’s Survey of Consumers (SoC). In this post, we examine whether this decline is broad-based or whether it is driven by specific demographic groups.

The SCE is a two-and-a-half-year-old monthly survey of heads of U.S. households and differs from the SoC in several respects:

Despite these differences, the same pattern has been observed recently in the two surveys: As indicated in the chart below, the median inflation expectations at the short-term and at the medium-/long-term horizons have been declining relatively steadily in both surveys. If we focus on 2015, we see that after a relatively stable period, inflation expectations at the three-year horizon (and to a lesser extent, at the one-year horizon) have declined sharply starting around the beginning of the summer. In fact, inflation expectations have recently declined to record levels in both surveys. In October 2015, the SoC median expectation for long-term inflation tied the lowest level ever recorded (2.5 percent) since the SoC started collecting monthly data. Inflation expectations in the SCE, which has a much shorter time series, have also declined to record levels over the past couple of months—both at the short- and the medium-term horizons. In fact, the November 2015 level at the one-year horizon (2.55 percent) was not only a series low, but it was also the largest one-month drop recorded since the inception of the SCE in July 2013. 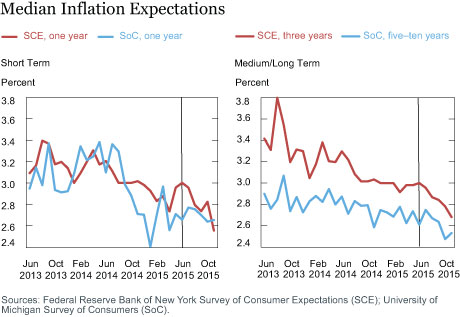 To establish whether the recent decrease in inflation expectations observed in the above chart may be attributed to a specific segment of the population, we partitioned the survey respondents into different demographic groups, including by age, income, education, homeownership, the region in which the respondent resides, employment status, and even, in the case of the SCE, a measure of the respondent’s numeracy skills. 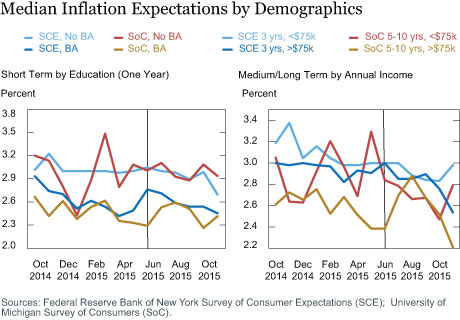 Now, using data from the SCE, we look at the issue from a different angle: Because an inflation density forecast is elicited for every respondent in the SCE, we can calculate the probability each assigns to the event that inflation will be negative (in other words, deflation). In the left panel of the chart below we plot the mean probability of deflation across SCE respondents for the one-year and the three-year horizons. Consistent with what we observed earlier, there has been an increase in the probability of deflation at both horizons starting around the beginning of the summer 2015. 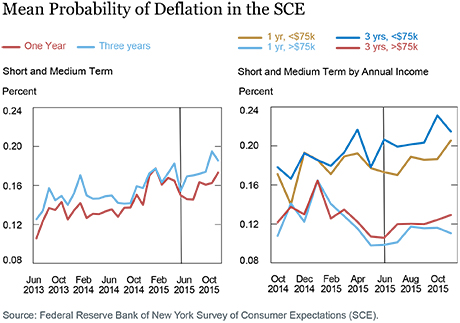 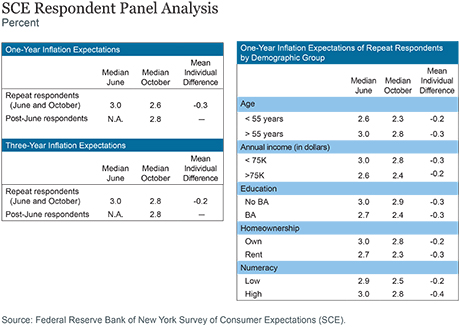