« The “Cadillac Tax”: Driving Firms to Change Their Plans? | Main | Hey, Economist! How Well Do We Weather Snowstorms? »

The recent financial crisis clearly revealed that the reliance of banks on short-term wholesale funding critically increased their funding liquidity risks; during market disruptions, it becomes more likely that banks will be unable to roll over those funds and will hence be forced to fire-sell illiquid assets and possibly contract lending. To limit such risk, the Basel Committee on Banking Supervision (BCBS) has introduced new liquidity regulations such as the Liquidity Coverage Ratio (LCR) and the Net Stable Funding Ratio (NSFR) to prevent excessive reliance on runnable funding in the banking sector. But what forces contributed to the banking sector’s reliance upon wholesale funding and how will the new liquidity regulations interact with monetary policy? Drawing on our recent Staff Report, we argue that monetary tightening by central banks, perhaps intended to contain credit booms, can lead banks to increase their reliance upon wholesale funding and contribute to systemic imbalances. Importantly, we explain how the new liquidity regulations adopted since the crisis would help mitigate any such increase in systemic risk.

Substituting Funding to Mitigate the Policy Impact
Banks typically fund themselves from two sources, retail deposits and wholesale funding. Retail (or “core”) deposits are made by a bank’s traditional customer base in its local market and are used by depositors primarily for saving or transactions. By comparison, wholesale funding is supplied by institutional investors (examples include large certificates of deposit, foreign or brokered deposits, and repo funding). Retail deposits are cheaper for the bank and “stickier” (less prone to run). However, because the supply of retail deposits is relatively insensitive to interest rates (price inelastic), banks tend to rely on wholesale funding when they decide to expand lending. 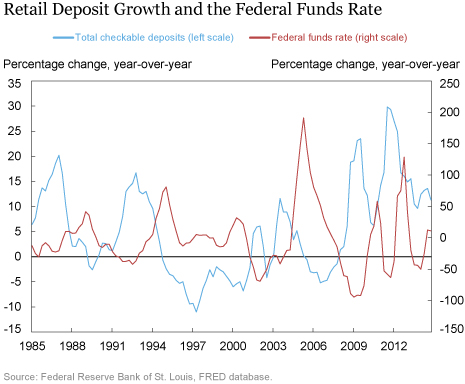 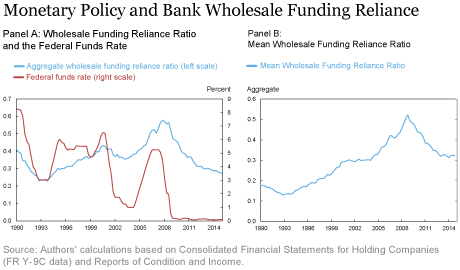 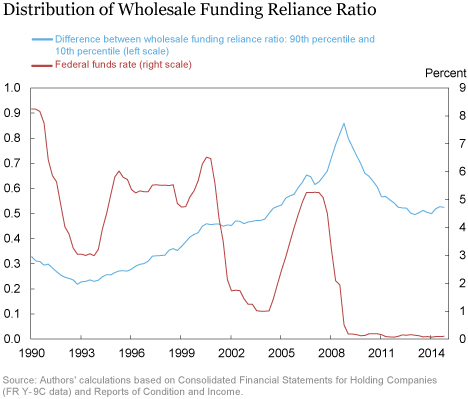 Implications
This funding substitution in response to monetary policy has several implications. First, it suggests that monetary tightening could increase systemic risk if banks actively try to reverse the effects of the tightening by substituting wholesale funding (with greater funding liquidity risks) for retail deposits. Further, our cross-sectional results in the chart above imply that this risk would apply more to large, potentially systemically important banks that are already more reliant on wholesale funds. This is contrary to the conventional wisdom that monetary tightening could mitigate systemic imbalances by slowing down a credit boom. Although that view may be true, our analysis suggests a possible offsetting effect on the liability side: systemic risk might increase (or decrease less than hoped) as banks attempt to unwind the effects of the tightening. Importantly, the new liquidity regulations would help mitigate any increase in systemic risk through this channel by increasing the implicit cost of replacing retail deposits with wholesale funding.


Hyun-Soo Choi is an assistant professor of finance at Singapore Management University.
Posted by Blog Author at 07:00:00 AM